Share All sharing options for: Milan Kytnar: Chasing a Dream

I didn't have much time with Milan Kytnar, Colin McDonald and Zack Stortini were long and enjoyable interviews and they each took time, something I wish I had had more of for Kytnar.

Kytnar was born in Topolcany, Slovakia which is really just a large town with a castle. Kytnar left everything he knew in 2007 to come to Canada to play in the WHL at the age of 18, on his own. Earlier that year, Kytnar had been selected 127th in the fifth round by the Edmonton Oilers. Being selected by the Oilers, being drafted into the NHL presented opportunities for Kytnar that he might not otherwise have had.

A year ago, Scott put together a Kytnar scouting report, and in the meantime Kytnar has now moved to Oklahoma City and is playing for the Oklahoma City Barons. This year, the centreman has played 63 games scoring 7 goals and 11 assists. Not exactly great, as that's still 2 points fewer than Shawn Belle in his 39 games. I still find it interesting that players move across the world to pursue their dreams, I struggled with my move from Edmonton to Calgary, but I didn't have a job I wanted in Edmonton. European hockey is different, but players have their dreams and preferences and this was an interesting opportunity to ask a European player what it was like to try to assimilate into North American hockey and culture.

Copper & Blue: Do you feel now, after all that you have been through, that it was the right choice to leave home and come to Canada to play in the WHL?

Milan Kytnar: Yes, definitely I never regret that. It's totally different hockey, and as I say always if I wanted to make that step forward to become a professional hockey player one day, it was a really good choice for me. I've learned a different style of hockey. The south hockey is closer to the world style of hockey if you play international stuff and games like that. So I think that it was the best choice I could possibly make. It helped me to develop myself it helped me to learn the things that others wanted for me to get better at. As I say, I never regret it.

Copper & Blue: Do you see a distinctive change in pace or is it style between the WHL and any development you would have received in Europe? Is there anything in particular that stands out, or is it just overall?

Milan Kytnar: I'd say it's a little faster because obviously the rinks here are a little smaller.  Players here are really good. The differences are from back home where I come from and anywhere in North America they have people that work with you all of the time and help you reach your goals. That's something that I probably wouldn't get back home.  As I've said, it's totally different.

Copper & Blue: I'm still in awe at how you moved not just from Oklahoma City to Tulsa, you left your friends, your family and you moved across the world.

Milan Kytnar: Right, you have to be mentally tough to make that kind of change. When you spend all of your life at home and now just like that, then the next day you are somewhere else; you're on your own basically. You come to a country there is a different culture and different language. Even if I could speak English but still it's different from what you learn in school and when you come here and talk to the people. So it took me a little while to get used to it, but I stuck with it and battled through and I learned a lot of things through those three years in the WHL that helped me come here and battle on a high pace.

Copper & Blue: When you came to the WHL how was your English, did you take it in school?

Milan Kytnar: Yes, I took it in school all of the time, so I could speak English. I had the basics and it was a little easier for me because I knew many guys from back home coming here and can't say a word of English. I can't even imagine how hard that would be for them.

Copper & Blue: Absolutely, and we know that it has happened to several players right?

Copper & Blue: How did you find it culturally then? Right now with the Oilers we have Magnus Paajarvi and he's talking about how bad he finds the pizza, it's nothing like at home. He doesn't sound too happy with the food situation. Was that another struggle for you, what were your main concerns?

Milan Kytnar: Obviously, it's totally different. Food and everything back home is, I'd say for me, it's better. When you grow up with something, that's always the best for you. With coming from the WHL to here I'm in my own apartment now and I'm making my own food from back home. I'm cooking for myself so it's a little easier for me. But back in the WHL I had to get used to the food and...

Copper & Blue: You were billeted, you had to.

Copper & Blue: Were there any other players that you were able to associate with in the WHL that was able to help you along with some of the cultural changes?

Milan Kytnar: The first year in Kelowna I was the only European there, so not really. [laughs] I was on my own. As I say, I stuck with it and it's a big difference and I talked lots with my parents and my girlfriend from back home and that helped me a lot.

Copper & Blue: Well at least we have some of those technologies that allowed for you to keep in contact with those back home. So you didn't feel completely disconnected or cut off?

Milan Kytnar: No, I didn't at all.

Copper & Blue: You must have always known that you wanted to play in the NHL then?

Milan Kytnar: Ya [laughs] it was my dream since I was a little kid. From the little age, I did everything that I could to become a professional hockey player one day and earn a spot in an NHL team. So I'm still working on that one, hopefully I'll be lucky enough and I'll keep working on myself and hopefully I'll earn that spot one day.

Copper & Blue: I've noticed that Slovakia has produced a good number of great NHL players. Is there anything that you think the Slovakia is doing right that helps to generate these great players?

Milan Kytnar: It's a little different now than it was back in the day. As you can see now, we don't have that many young players that could come play in the NHL, and play there right away and be a prime time player. But, it was a lot different back in the day. I think that coaches and people and everyone else just worked around hockey so much before and at this point right now it's a bit more laid back. If I can compare Slovakia to Switzerland where they didn't have that good of a young team but they started to work with their young players more and more and now they come to the national tournaments. They play really good hockey so this is something that we are missing back home as I said earlier, that's why I made the choice to come to the WHL because I really didn't have anyone back home that could help me like the coaches can help me here.

Copper & Blue: Thank you very much, I appreciate your time. 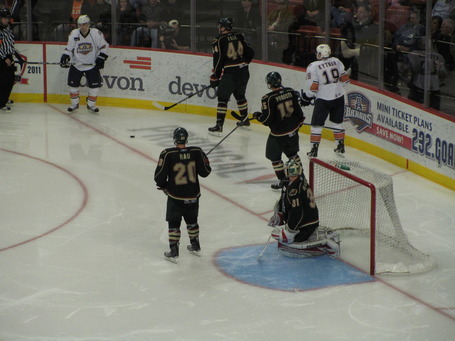