Officiating is in the NHL is generally of terrible quality.  Each fan base believes the refs are out to get them and use each bad call as evidence of the ongoing conspiracy against their beloved skaters.  Referees take the blame for losses more often than goalies and coaches put together.  I'm not one to blame referees for much of anything, other than being very, very bad at their jobs.  My tendency is to blame management for putting the Oilers in a position to lose, and the injuries and issues that follow are just a side-effect of icing a team lacking depth and NHL players.

Tonight, however was a different story.  The officiating in Detroit was atrocious and the referees had a clear impact on the game.  They decided early on that the Red Wings were infallible and they stuck to that..  It was one of those nights when Mario Lemieux calling the league a  "garage league" seems understated.  By my count, the Oilers were called for three penalties that existed only in Paul Devorski and Brian Pochmara's minds -- Shawn Horcoff for Interference , Ryan Jones for Roughing, and Gilbert Brule for Tripping.  On the other side of the ledger, the Red Wings committed five infractions, yet none of them were called.  If Devorski and Pochmara had and scruples, they'd take a cue from the referees in the Big East and withdraw from the rest of the season.

The terrible officiating overshadowed an outstanding performance from Devan Dubnyk who stopped the Red Wings thirty-nine times in a row before giving up a 6-on-5 goal with 25 seconds left.  Dubnyk made twelve stops on the penalty kill and generally avoided the big rebounds the Oilers defense has grown accustomed to seeing flutter by them into the slot.  It was Dubnyk's best performance of the season and if not for the officiating would have been enough for the win. 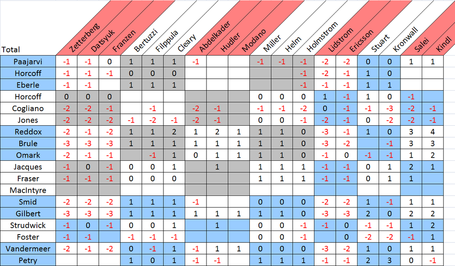 We can use math to figure this out, but without using math, tell me how much better the Oilers would have been with Martin Gerber and Devan Dubnyk platooning between the pipes from the beginning of the season in place of, you know.

Tom Gilbert and Ladislav Smid have become a legitmate NHL pairing and it looks like they can be counted on for awhile.  Gilbert is able to play with anyone and makes everyone around him better, but Smid is a significant step up from Gilbert's previous partner, Theo Peckham.  Smid and Gilbert were the team's top penalty killers, with Smid on the ice for 6:54 and Gilbert on the ice for 5:14 of the Oilers 9:52 of short-handed time.  They played enormous total minutes - Smid was on the ice for 27:34 and Gilbert for 28:12.

Magnus Paajarvi was skating hard and putting pucks on and at the net for the entire game.  He tied for the team lead in shots with 5, and was generally effective on the forecheck.  The injury and attrition, Paajarvi is now the featured wing on the Oilers frist line and tonight he looked like a guy who deserves the first line time.

Steve MacIntyre dressed and didn't see the ice.  I understand the Oilers are suffering through injury issues and the Barons aren't able to give up emergency callups, especially in the midst of a back-to-back against Grand Rapids.  I get that MacIntyre was pressed into service against a team who doesn't employ hired knuckles and would skate rings around MacIntyre.  But if there were ever an example of the uselessness of the MacIntyre signing - it was tonight.

Andrew Cogliano had another rough outing at even strength, beaten up in the possession metrics, the scoring chances and he once again took a stick to the face.

The officials were the story in this one and they made sure of it time and time again.