Share All sharing options for: CHL Update - It's Time To Consider Two Top Ten Picks For The Oilers

This is Tyler Pitlick. He was considered to be a 1st round talent, but fell to the Oilers at 31st overall. People who watched Oil change 1.0 will recall that the scouts were high on Pitlick but the consensus was that he may not be able to last till the second round. He was enjoying a fine season with the Medicine Hat Tigers before an ankle injury took him for the season. I was looking forward to seeing him play in the WHL playoffs, however, I don't think this will affect his development.  Management shouldn't be bothered by his injury. Steve Tambellini remarked that he views Pitlick as a 2nd or 3rd line center in the NHL.

That episode of Oil change was very interesting. It was clear to the scouts and the management that Curtis Hamilton and Martin Marincin will be the two prospects selected in the second round. However, availability of Pitlick forced Oilers to alter their plans. I am very confident the Riley Nash trade can be attributed to Marincin and Hamilton being available at #46 spot in the draft. Another interesting thing I noted was that the management was working very hard to get another 1st round pick, specially a top 10 pick, in order to draft another impact player. I think this is one of the reasons that Dustin Penner was traded. In my opinion, Steve Tambellini went in this trade deadline to arm himself with another 1st round draft pick and Penner gave him that chance. I dont think he is done yet either. I expect the Oilers to be very active at the draft and try and get into the top 10 selection. And if the Penner trade is any indication, we will not like the deals that Tambellini will make at the draft. However, I am now slowly getting convinced that he finally has a plan and he doesn't care about its popularity.

That said, I am an easily excitable person and I am excited about next draft and possibilities that exist. I think that we should now start to look at players ranked somewhere between 8th and 15th as that is going to be our second pick in the draft after the trade is completed. Some of the names that come to mind are Joel Armia, Mark McNiell, Dougie Hamilton, Brandon Saad. Steve Tambellini has stated that they will be picking by position, and I think it extends to both picks. For me, the best case scenario is Adam Larsson and then Ryan Strome / Jonathan Huberdeau, if Tambellini is able to move up in the draft. If a status quo is maintained, then look at Larsson and then McNeill or Saad.

As usual, ZPG is Zero point games. Players in black are draft prospects for the upcoming draft. Players in copper are Oilers prospects. Players in red are first round draft picks from the previous draft and those in blue were drafted in 2009. 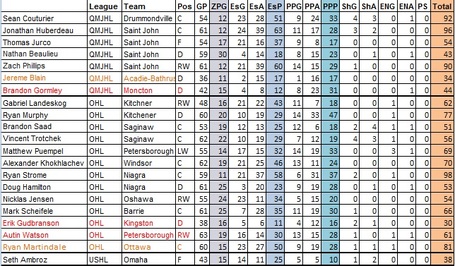 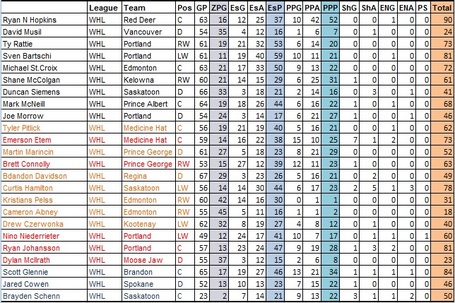