Tales From the Road: Oklahoma City

Share All sharing options for: Tales From the Road: Oklahoma City

Oklahoma, the state with it's own musical. I'm not sure if that's a bigger deal than having a musical named for your city, but it's all I knew about the state of Oklahoma before the Edmonton Oilers announced that they would move their farm team to Oklahoma City. I can't say that I have learned much more about the state or the city as the season has progressed, aside from the fact that they had a freaky winter storm a few weeks ago. That's alright, I do like surprises and that is exactly what I received when I arrived in Oklahoma City to see two Barons' games on February 25th and 26th, 2011.

The  few things that I have learned about the people of Oklahoma leading up to and including my visit, is that they are a strong group of people. They are faced with adversity or the threat of natural disasters annually, and yet remain calm and friendly. The first time someone told me they were "fixin'" to do something, I nearly burst out laughing, but in a good way. Their sayings that make me think of old movies, or any southern cliché really set me at ease.

The city remembers and has honoured the memory of all 168 people who were lost in the Oklahoma City bombing of the Murrah building in 1995. This bombing has been overtaken as the most destructive act of terrorism on US soil by the World Trade disaster, but is still a tragedy of the worst kind. The site of the building has been dedicated as a memorial that leaves visitors with a solemn feeling. There are 168 empty chairs in the greenspace representing each of the fallen. They are arranged in 9 rows to represent which floor they died on, as well as four chairs apart from the others, representing those who died outside of the building including one rescue worker. If anyone gets a chance to go to Oklahoma City, you should make sure you visit the site. 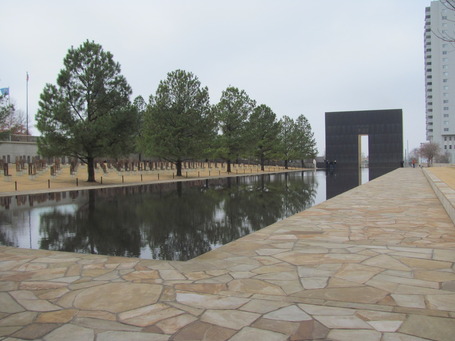 On the radio and in the airport, I was reminded of the other disasters that the fine people face with the unpredictable weather in the form of tornadoes. There were tornado shelter signs throughout the airport, and on the radio there were advertisements and contests to win a steel tornado shelter. Edmonton surely remembers it's major tornado, but it's not something that people worry about to the same extent or for the same reason.

The other thing the City of Oklahoma has lost recently, their sometimes beloved Oklahoma City Blazers a club in the CHL. Some compare everything the Barons do to the Blazers and still wear their Blazers jerseys to games. Some see the difference in skill between the two leagues and have forgotten the Blazers already.

Things looked typical of an early spring as I exited the Oklahoma City international airport, if it was actually April and I was back home in Edmonton. The grass was brown, the trees were bare, but there was red earth everywhere! I headed out on the freeway and into the city trying to imagine this as a hockey city as I glanced at all of the OKC Thunder banners, the city's NBA team. Getting closer to the Oklahoma City Arena and the Cox Convention Centre the sounds of road construction won the competition with my radio. It seemed the entire south side of the downtown had been ripped up, making it just that much more interesting to make my way around. My poor Tom Tom was not much help and he received probably more cursing and swearing from me than he was entitled to. 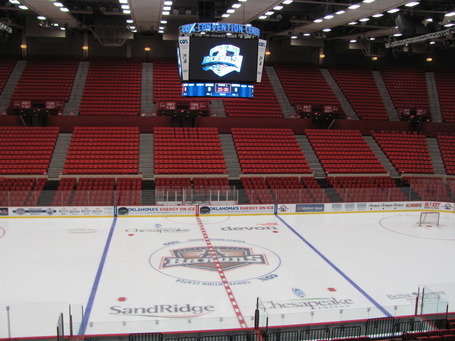 I did finally make it to the Cox Convention Centre, a building I could see for blocks, but just couldn't get to. The building itself looks nothing like an arena from the outside. In fact, it's next door neighbour, the Oklahoma City Arena would have been my first guess had I not known better. I still double checked my paperwork to make sure that it was indeed the Cox Convention Centre I was looking for. Things seemed even more bizarre as I walked in. There were signs for meeting rooms, and directions for different entrances, but no chill from the ice and from some entrances there is no mention of the Barons. Once I started exploring I found that one side of the convention centre has signs for the Barons, posters and banners even a ticket window. The interesting thing is that you have to go up the elevators or escalators to get to the entrances to the arena. From there, I found the familiarity of any arena that I have come to expect.

Fans were milling about, looking through the spacious Barons merchandise store, talking with the Barons staff and generally enjoying themselves. Many were dressed in Barons sweaters and I took note of who's I was seeing. There were a couple Belle, MacDonald, and Giroux on first glance. Then there were the Oilers jerseys, Eberle, Hall and Gretzky as well as unnamed jerseys were easily spotted in the crowd. Those that were in attendance were definitely supporters of the Barons and ultimately Oilers organization, how could I not feel a sense of comradery with these people? They all wearing the Oilers logo on their sleeve, in the very literal sense when you look at a Barons jersey. 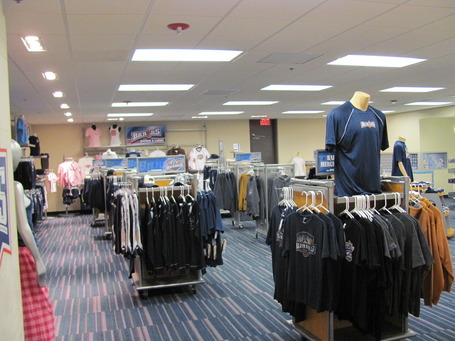 The Barons' merchandise store, well one third of it. Photo by Lisa McRitchie all rights reserved

A Barons' game begins with more theatrics than an Oilers' game, or maybe it's just because it was something new for me that I was filled with such a sense of awe. The Barons' arena announcer, Ben Buckland, is also like the event's emcee. He calls the goals, the penalties, even icing and offiside as well as opening the night off and doing the job of Mark Shultz for the Oilers, interacting with fans and running contests and says it's "Hockey time in Oklahoma City". A red carpet is rolled out and Buckland steps out onto the ice as if he is announcing a wrestling event. I know that some fans enjoy Buckland, and that some do not. No matter which way people think, Buckland is a hockey icon in Oklahoma City.

I mentioned that offside and icing are announced. It's true, they show a video before each game saying what a power play is, what constitutes offside and they should include icing in there. That is the most asked question I field when I am in non traditional hockey markets. No matter, every time the play is whistled down for offside or icing, Buckland announces what the call was. 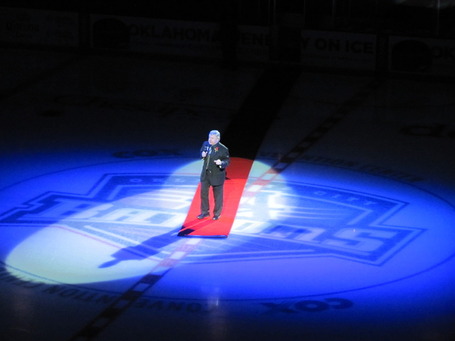 The Barons have a mascot, Derrick the mountain Lion. Derrick is great with the audience, and not overbearing in the crowd. Most likely I give Derrick so much credit because I have had run ins with the Harvey the Hound in the Saddledome and Fin the Killer Whale at the Roger's Centre as an Oilers' fan. Either way, I think that Derrick is a nice addition to the Oilers' family. 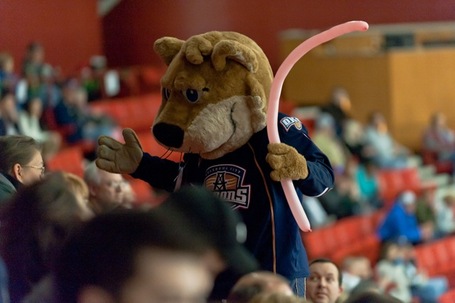 The arena itself holds 15,000 people and one day hopefully that many will be in attendance. The premium seating in the Cox Convention Center is the wood panelled sections at the top of the lower bowl, behind the oppositions' net, the right side on the photo below. The terrace suites have flat screened televisions and storage space, but are otherwise chairs at tables that are semi-private. This is very different compared with what you see for suites in most other arenas, but it works here. 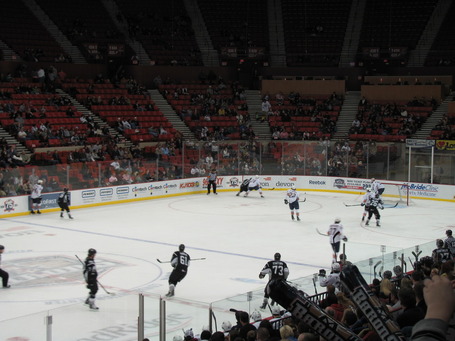 Friday February 25th the Barons' hosted the San Antonio Rampage, the Phoenix Coyotes' farm team, and had a stick give-away for fans. The give-away was a big draw for fans, many stayed late to try to get their favourite Barons to sign them after the game. The Barons won this game, 3-2 and as most hockey fans know, wins are great fun. This Barons' team is hunting down a playoff spot and these two points were a great step towards their goal. Oilers' fans likely remember Jeff Petry, who received the games' first star of the night. 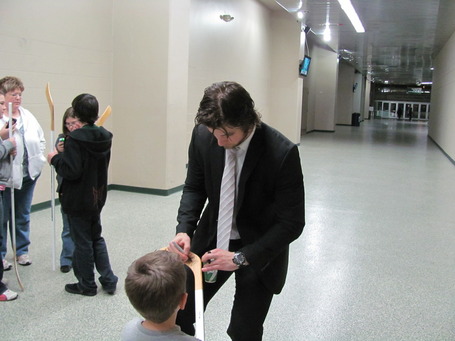 Anthony Aiello signs autographs for fans after the game. Photo by Lisa McRitchie all rights reserved

As I left the game, I asked people in the crowd how this compared to the Blazers' games and what they thought of the Barons. Everyone I spoke to said that they enjoyed the competition of the AHL so much more than that CHL. Some even said that the CHL was just a bunch of guys who could barely skate. Ouch.

When I asked others in the community their take on the Barons they mentioned that they would like to see highly competitive sports. I was quick to reply that the AHL is that immediate step below the NHL, and that it often features players that are up and down from the NHL at various times of the year. I said that it may not be the NHL, but it is extremely comparable. This caught some people by surprise and I found that a little sad, but I don't know what else the Barons can do to get that message out in the community. I can't help it, believe me I've tried, I talk to pretty much anyone and everyone everywhere I go but I don't think that I alone will be enough to get the Barons' message and status out into the community. I hope it is only a matter of time. 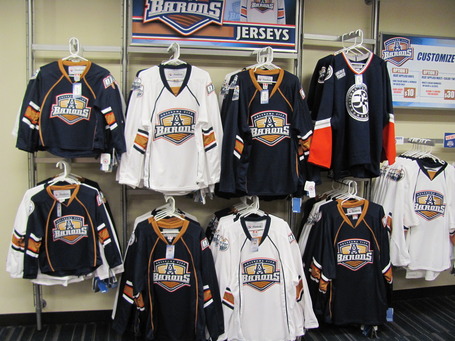 The game on Saturday February 26th was much less favourable. The Barons' were shutout 5-0 to the Minnesota Wild farm team, the Houston Aeros. I told people I felt that I was getting the full Oilers' organization experience, but it actually hurt more to see the Barons experience that kind of loss than seeing the Oilers do the same this year. Why? The Barons are in their inaugural year in Oklahoma, they are so close to the playoffs, and well just look at their roster. These are players that are on the cusp of cracking into the NHL, or have been bouncing up and down between the two levels. I think of what it must be like to work in the hockey industry, so different in every way from my own line of work. Disappointments I feel with my line of work don't even compare to what these players must feel. Don't get me wrong, I think that these guys have a pretty good deal going, but I'm a sympathetic person. 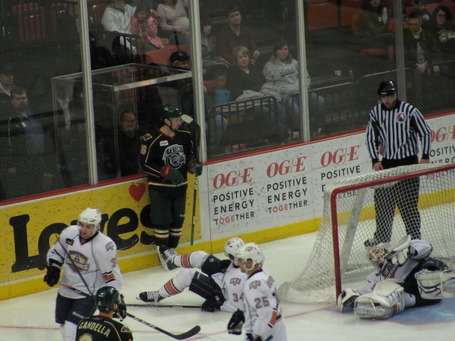 The rest of the city of Oklahoma struck me in many different ways. There were some neighbourhoods with boarded up houses, piles of garbage out front and a general feeling of despair much like what I experienced in Detroit. In other neighbourhoods there was new construction, new cars and smiling happy people. Industry in Oklahoma City seems to be oil and natural gas, much like Calgary and livestock which is again much like Calgary. The population and large geographical area is also very similar to Edmonton and Calgary, and not as intimidating as some other US cities I have had the pleasure of visiting. So, I found it hard to understand the economic climate and the disparity I was seeing. Overall, OKC is a vibrant city that embraces sports and history as seen in their historic sections of downtown and their Bricktown section of town. Okies love their sports, and for that reason alone I can find common interest, let alone everything else the city has going for it.