There was a lot of talk when Sam Gagner and Andrew Cogliano made the Edmonton Oilers in 07-08, that a new era of exciting young players had started. The Oilers were a team with a bright future and other teams were to watch out for their renaissance. However that was not to be and with each subsequent season, the Oilers finished lower and lower in the standings and literally hit rock bottom last season. The 2010 offseason was a very special one for the Oilers organization and it all started with the draft. After much speculation and debate throughout the season, Oilers selected Taylor Hall with their historic first overall selection. As of today, he is one of the main reasons to care about this dismal season. Each and every game, Hall wows us with many scintillating plays, keeping us interested in Oilers and their development.  However, we already knew all this would happen. We had all anticipated that the new rookie movement will fill us with HOPE. We all knew that Devan Dubnyk would perform as a solid netminder in the NHL. We knew Peckham would wreck ‘em all and Petry would impress us with his control and poise.

Due to some tremendous drafting and little bit of luck, our prospects pool doesn't look empty despite the huge turnover. Anton Lander is having a tremendous season. His resume already boasting superior defensive skills, he looks to have added some offensive acumen to his game as well. He has surpassed his scoring totals from last season. His only drawback is his skating, but the same could have been said of Jodan Eberle. Of all the prospects turning pro this fall, I think Lander has the best chance at cracking the Oiler's roster. That is not to say that others have been bad. No sir, Curtis Hamilton has continued his strong play and the best news is that he has been healthy. The Saskatoon Blades traded for Brayden Schenn and Hamilton is now playing on a line with him. This only means better things for Hamilton. He is a big kid who is known for his strong 2 way play, making right plays and not putting himself in a position to hurt his team by taking penalties as evidenced by his 10 penalty minutes all season. All three defensive prospects in the CHL are developing well and showing more than capable offensive prowess. At first glance Martin Marincin seems to be leading the trio, but he and Davidson have a similar ES P/G pace and Blaine is ahead of them both in that area. Of course Marincin has the draft pedigree over them, but as of today very little separates the three. They have size, skill and grit. That being said, their defensive skills are said to be raw and it will be a while before they can impact the club at the NHL level. Ryan Martindale continues his offensive season. His scoring is far above his 09-10 numbers and he is a part of the most productive line in the OHL. However, Martindale has scored the least points among the trio, which is odd as he is a center and one would expect the puck to pass through him more often. Kristians Pelss and Drew Czerwonka seem to be keeping their heads above water, but same cannot be said for Cameron Abney.

After the jump we will look at the situational scoring for some players in the CHL. I have included Niklas Jensen from Oshawa, Mark Scheifele from Barrie and Joe Morrow from Portland in the list. These are the year to date totals as of February 6th 2011. The situational scoring between the updates is posted as fan posts for reference purposes. 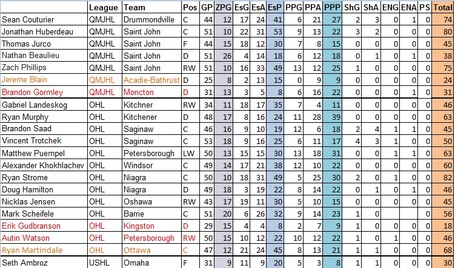 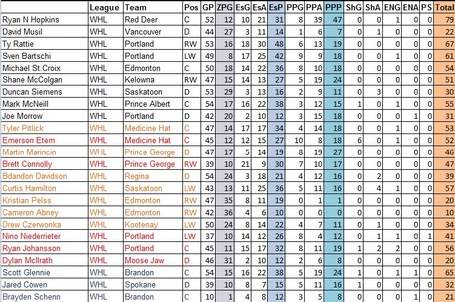