Tales From the Road: Tampa

Share All sharing options for: Tales From the Road: Tampa

A week in Florida, in December. That sounds like a good idea to most Albertans. So, it was with great pleasure that I decided to make the trip to Sunrise and Tampa to watch a couple of Oilers games.

There are two reasons I can get behind the Tampa Bay Lighting.

The city of Tampa in December of 2009 was under construction, and there was a general feeling of excitement about that fact. Construction generally means employment and prosperity, so it was with good reason for the excitement. There are beautiful stretches of highways connecting Tampa to it's surrounding cities such as St. Petersberg. These highways are often surrounded with narrow strips of beaches and palm trees, and include magnificent bridges. It is truly a different experience for a land locked Albertan to see nothing but ocean on either side of the highway, and watch the road drop away in front of you as you crest each sloping bridge. 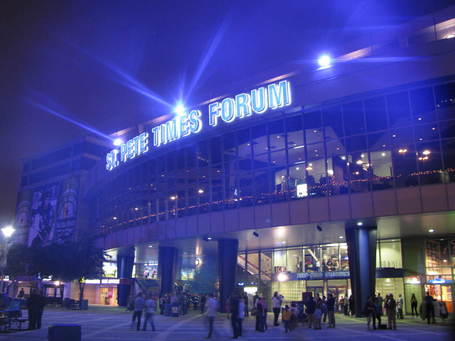 St. Pete Times Forum, home of the Lightning, is surrounded by ample parking but appears to be in the middle of nowhere to a person who doesn't know the area. The city's downtown either empties quickly at the end of the work day, or is just not as busy as I am used to in other cities. I was not sure what size of crowd to expect in Tampa. This was a team that had won the Stanley Cup, but this was still an expansion team and in Florida no less. That night, the announced crowd was 13,477 but it looked more like 7000-8000. Of course the seating numbers don't mean as much as the percentage of the seats that sell, or are used. This year, the Lightning are filling 84% of their seats, last seat 78.4%. The arena itself is impressive to look at, and difficult to photograph after the game. My camera had been in the cool and less humid air of the arena. Stepping out into the humid Tampa night quickly fogged my lens.

Being new to the area and a first time visitor to the arena, it was hard to figure out where to go. Walking into the arena there were elevators and escalators and seemingly no stairs and you had to just know what to do. The elevators took you to the "special boxes" and the escalators lead to the general seating. Although there was space to move around, it felt as though you were really enclosed as you made your way around the arena, you couldn't just look over your shoulder and see the rink in some locations of the concourse and the ceiling didn't always feel as high as other arenas. You didn't always get the comforting roundness flow that you pretty much always get at most arenas. So far, Tampa gets my vote for the most interesting arena design. There were a variety of beer and food vendors you would never see in Alberta, but otherwise nothing truly caught my eye. 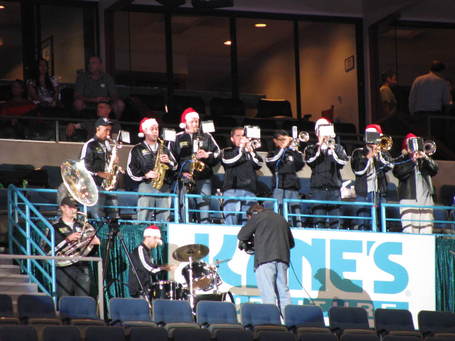 Until the game started. This was Hanukkah night at St. Pete Time's Forum with a special ceremony in front of the arena before the game for those that wished to participate. There was also a Christmas band in the upper stand. You don't see this very often. In fact, I don't know any other team that would have this, or sadly any team that would have the space to have something like this. 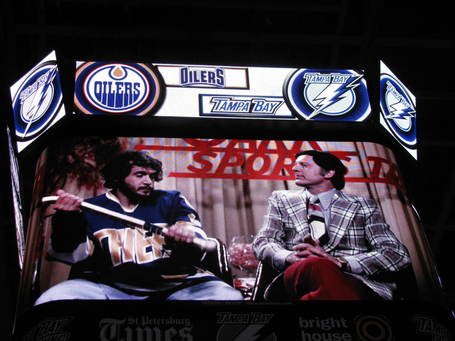 Then of course there was this on the big screen, a scene from Slap Shot. What a way to tell visitors to Tampa, and new potential hockey fans a little more about the game than this scene. That's right, some people in the building learned about icing on the jumbo-tron. I would love to see more of this in every arena. 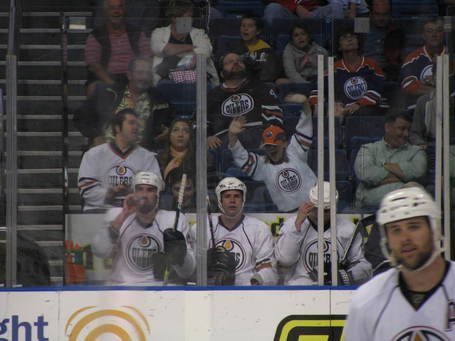 There were many Oilers fans around me, and throughout the arena. I was shocked. Of course I tried to talk to all of them. Many live in the area or an hour or two away, having transferred for work or retired. Others were on holidays. A new friend I made at the game was in Orlando on a family vacation and realised the Oilers were playing and so close, so rented a car and made the drive. The best part of this meeting was that it proved that there are other people out there that will jump at the chance to see their favourite team in another city, and for so much less money for lower bowl seats. I could buy three or four seats in the lower bowl in Tampa for what I would have to pay in Edmonton or Calgary. 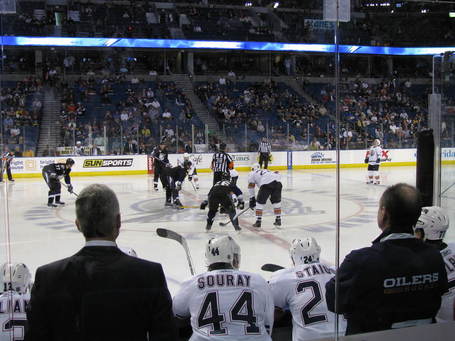 The Edmonton Oilers of 2009-10 looked very small from this angle against the Tampa Bay Lightning, but the game itself was exciting. The Oilers were completing their record breaking 5 game winning road trip and everyone was proud to be an Oilers fan, no matter where they were. Most fans didn't have a problem with any of th coaches on the bench, and you could tolerate most of the players on the ice. Even that guy, front and centre, Sheldon Souray. 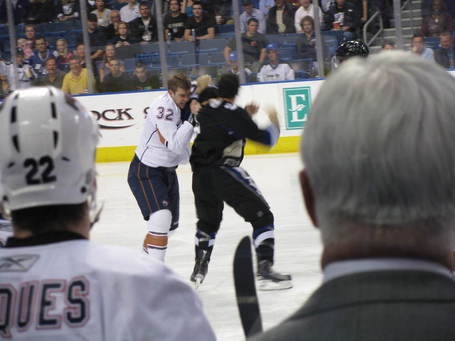 The Lightning fans have a great on ice product right now. look at their current roster, and they already have a Stanley Cup victory. Usually, people love and can get behind winners. It's in some ways surprising that Tampa is not selling out and filling their stands. Is this a case of "What have you done for me lately?" I think so, but by this point fans should be able to appreciate the hockey they have to enjoy. Should I ever have a cruise that leaves from Tampa, I will be sure to check out another game, no matter who the Tampa Bay Lightning play. 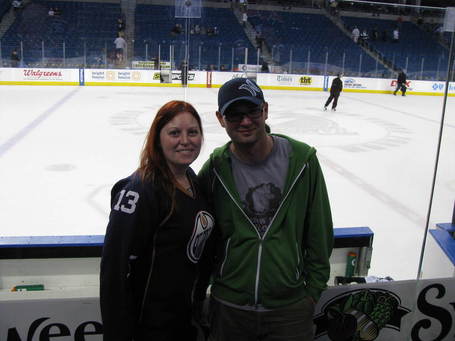 For my friend Bruce, here is Zack Stortini's Gordie Howe hat-trick, complete with both fights for the evening: