Most of this game was good, old-fashioned fire wagon hockey - up and down, back and forth, shots on goal were fast and furious and physical play was the norm.  But, as is their custom, the Oilers made mistakes to shoot themselves in the foot and, stop me if you've heard this before, lost the special teams battle.  The Blues also exposed the Oilers lack of size and strength, despite the presence of Steve MacIntyre and his earth-shattering 25 seconds of time on ice, and made it obvious that Dustin Penner is a unique talent in the organization and shouldn't be moved at the deadline. 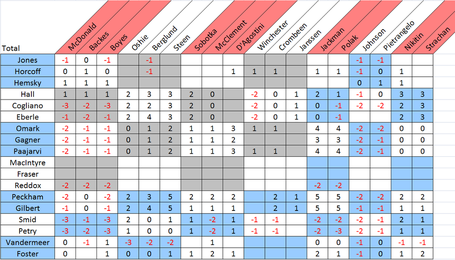 I have no idea how Linus Omark last until the 97th pick overall, and I don't know which Oilers' scout had the goods on him, but whoever that was deserves an enormous amount of credit for the find.  Omark lusts after the puck in the offensive zone and doesn't give it up no matter the size of the brigand attempting to take the puck from him.  Face to the play, back to the play, behind the net, on the side walls, set up behind the net like a modern day mini-Gretzky - it doesn't matter - if he has the puck in the offensive zone, he's not giving it up until he thinks he has a scoring chance.  His style is reminiscent of the 70's and 80's Russians who refused to give up the puck and spent eons in the offensive zone firing puck after puck on goal until the opposition finally surrendered and gave up a goal.  It's a shame that Edmonton's management team was so stubborn last season and wouldn't work with Omark to bring him over.

Liam Reddox was demonic while short-handed tonight.  It's a shame Edmonton's management insisted on keeping Deslauriers, MacIntyre, Jacques, and Strudwick over an actual NHL player who might have stopped the gusher that is the Oilers' penalty kill.

Taylor Hall tripped people, ran the goalie and was generally a pain in the ass tonight.  It's about time.

The Sportsnet broadcast crew normally spends about 20% of the broadcast talking about how great Nikolai Khabibulin is or defending Khabibulin and making excuses for his poor play.  Devan Dubnyk got no such quarter tonight.  It's a shame Edmonton's management exerts such influence on the media.

I don't know what's wrong with Ales Hemsky and the Oilers' power play, but it's atrocious.  The numbers show how poor Hemsky has been this season, but tonight was a whole other level of atrocious.  If the puck isn't being forced to Foster at the point, it's being forced to Hemsky.  Once Hemsky has the puck, the other four Oilers stand around, waiting for Hemsky to do something.  While they wait, the play dies on Hemsky's stick.

Tom Renney dressed Steve MacIntyre because they are both cliches and cliches have to stick together.