Share All sharing options for: Boston Defeats Edmonton 3-2 In A Scrappy Affair

The tough thing about being using math as an analysis tool in sports is time frames.  In the long run, the math always wins out.  In the short run, funny things happen.  For example, a writer might pen an article in which he wonders about the long-term viability of a team's young goaltender and watch as that goaltender goes out and makes 37 saves on 40 shots and looks like a franchise goaltender.  It happens.

It might sound strange, especially during a season in which the Oilers have lost by 6 goals once and 5 goals five times, but this was one of the worst games the Oilers have played so far this season. The Oilers were outshot 32-12 after two periods and when they needed to come back, they were again outshot 8-5 in the third period for a total of 40-17.  And the chances the Oilers were giving up weren't creampuffs either.  Dubnyk was amazing in this one.

And with that, the Oilers head into deadline day with the worst team in the league for the second straight season.  They've been the worst team in the NHL since 2006-2007.  They trail the Islanders 365-354 in total points and they're 35 points behind 28th place Tampa.  An enormous percentage of the Oilers' fan base is clamoring for a trade, specifically Ales Hemsky or Dustin Penner so that the return can be added to the rebuild.  I have a feeling that most of that segment of the fanbase is young, very young and didn't suffer through the perennial rebuilds of the 90s.  The Oilers spent a decade trading every talent they had (except Doug Weight) for draft picks and prospects and selling the fans on the next group of prospects.  I bought into the company line for a few years before I realized what they were selling - the future.  This talk of trading the team's two best players for the future looks awfully familiar to  those of us who suffered through the 90s and early 00s. 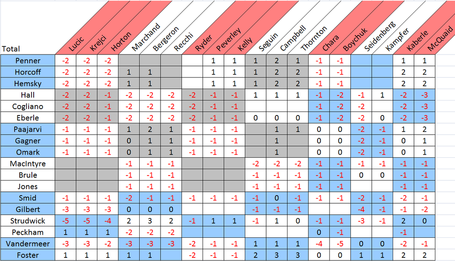 Devan Dubnyk was brilliant.  He was abandoned by the team in front of him on all three goals and only had a chance on Rich Peverly's goal - Boston's third and that was a partial breakaway.  Games like these make Nikolai Khabibulin's contract, the one with two years left, even more maddening.

By the time some of you read this, Jim Vandermeer may have already been traded.  In spite of his ability to bleed scoring chances (and he did it again tonight, losing the chances battle 2-8) Vandermeer's fight with Milan Lucic was outstanding.  I'm not typically a writer or a fan who has much reaction to a hockey fight and I wouldn't care if fighting were abolished from the sport altogether, but seeing Vandermeer, who must know he's about to be traded, stand toe-to-toe with Lucic was fantastic.

Linus Omark was outstanding working the right point on the power play.  He manages to get puck through to the net and is one of the few pointmen the Oilers have that isn't immediately challenged by the opposing forward.  His puck skills are respected and he makes the best of it.  Omark also had an outstanding steal on the forecheck in the second period which led to a scoring chance from behind the net as Omark quickly saw Patrice Bergeron in the slot and tried to bounce it in off of him.  He nearly succeeded.

You know how Andrew Cogliano has that habit of focusing on the puck in the defensive zone and forgetting about everything else around him?  Most of the time it leads to a scoring chance against, if not a goal.  Cogliano may have infected his linemates because both Taylor Hall and Jordan Eberle spent much of the night standing around their own zone watching the puck.  Hall, Eberle and Cogliano were -3 through two periods and they earned it.  Michael Ryder had enough time to take a nap as he wheeled around the net in slow motion as he scored on Dubnyk, but the defensive play leading up to the goal was awful.  All three of the forwards on that line were guilty of something and in the end they each stood and watched the puck as it was put on net and then in the net.  The Peverly goal was something special.  Cogliano coughed up the puck in the neutral zone, then decided not to backcheck.  Meanwhile, Kurtis Foster pinched down the boards and rather than rotate back, Jordan Eberle stood and watched over his shoudler as Peverly went the other way.  After a nice little run over the last few games, that line gave back tonight.  If there were a reverse three stars, Hall, Eberle and Cogliano would get all three.

Theo Peckham threw some hands with Nathan Horton but ended up taking a significant shot to the face.  He didn't return after serving the penalty and the Oilers announced Peckham wasn't returning due to precautionary measures.  It's nice to see the Oilers using precautionary measures, but it's never good to see a young guy like Peckham suffer a concussion, especially because he relies on running into people to be effective.

Liam Reddox has played some decent hockey over the last few games and has been a standout on the penalty kill.  The obvious course of action for the player is to promote him to the third line and see what he can do with some skilled linemates against some lesser competition.  Tom Renney scratched him.

The Bruins are a big team with some brawlers so Renney decided to dress Steve MacIntyre.  Renney gave him six minutes of ice time while Theo Peckham, Andrew Cogliano and Jim Vandermeer all fought.