We've Got a Long Way to Go

Share All sharing options for: We've Got a Long Way to Go

This is a post about scoring chances, one of those posts where I bring out the ten-game rolling average and put the word "optimism" in the title.  No such luck this time, I'm afraid.  The Oilers have been pretty bad all season.  They've been historically bad on special teams, which has tricked us into believing they're not terrible at even strength, particularly with young stars Taylor Hall and Jordan Eberle more than pulling their weight.  Unfortunately, even if we're looking at even strength results, this crew still stinks.

In the comments to the last post on this topic, JLikens was kind enough to drop in and point out that their run up toward 50% in Scoring Chance % and Fenwick % was being driven largely by score effects. Even though they had put together a ten-game run in which they'd earned 50.8% of the Fenwick events, they were only earning 46.6% of the Fenwick events with the score tied.  More recently, they've been a lot worse than that. 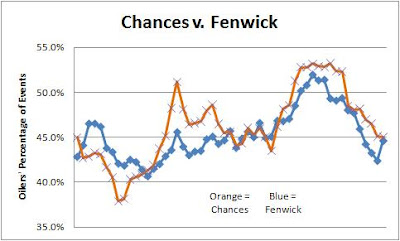 There was a brief period in which the Oilers were riding high, but they've come crashing back down since then, unable to sustain the steady improvement in Fenwick % that had been going from games 25 through 50.

The most disappointing part of this recent ten-game stretch has been the trio of Shawn Horcoff, Ales Hemsky, and Dustin Penner who have mostly played together, but haven't been able to carry the mail.  In terms of chances, the Oilers have earned 42.7% of the EV chances with Horcoff on the ice  (+35 -47), 41.6% with Hemsky (+37 -52), and 36.0% with Penner (+31 -55).  When your best players are playing together, they need to be able to do better than that no matter who they're lining up against.  These guys do have a history of outplaying the opposition when they're together, so I expect them to bounce back, but over the last several games, they've been a part of the problem.

The bottom three lines are filled with rookies, youngsters, and players who don't belong in the NHL.  If the Oilers are going to be at all competitive over the last two months of the year, they absolutely need their top players to be better... provided, of course, they're all still on the roster by the time the Oilers line up against Nashville on Tuesday night.