I've never been a big fan of watching the Minnesota Wild, mostly because they're just a vanilla team with a vanilla coach and vanilla players.  Even though the team is lacks anyone or anything interesting, they've made a habit out of absolutely pasting the Oilers without breaking a sweat.  For fans, watching an incredibly boring team beat the tar out of the Oilers is tortuous.  The only good part about the Wild has been Mikko Koivu, even if Todd Richards hasn't figured out how to use him.  With Koivu out tonight, the game promised to be an extra-boring beating, and the Wild delivered.

Aside from the beating, the biggest news from this game was Jim Matheson creating his own media storm.  The mainstream media has hinted of Nashville's interest in Ladislav Smid for a couple of weeks and today Matheson wrote an article about Smid dealing with trade rumors.  It's fun to watch the tail wag the dog. 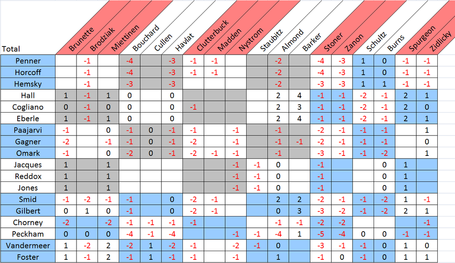 There was nothing good about this one.

Jeff Petry "lost his confidence" and "needed seasoning" and was sent away.  Theo Peckham has stunk since Ryan Whitney was lost for the season and Tom Gilbert and Theo Peckham were forced to play tougher minutes.  Peckham has been especially bad in the last few weeks, but tonight was one of his worst games on the season.  Tough to blame him though, he had Taylor Chorney riding shotgun on a second pairing.

In the third period, Cal Clutterbuck drilled Tom Gilbert from behind into the boards.  As Gilbert struggled to find his bearings, Ladislav Smid went for a stroll up ice to pull the "bark at the opponent, but don't actually do anything about it" move, now known as "Smiding someone" and neglected to play defense.  The Wild sent a cherry-picking Pierre Bouchard in alone on Nikolai Khabibulin for the spin move goal.  Nikolai Khabibulin is about to become the modern-day Horace Grant.

What was once a reliable GAG line has become a mess.  Horpensky, Shawn Horcoff, Dustin Penner and Ales Hemsky have not looked good since being reunited and it might be time to break them up.

The Oilers were outchanced in the 7-0 in the third period.  Zero scoring chances for an entire period.  I'm sure glad the culture changed in Edmonton.

There are multiple reasons so many fans don't believe Steve Tambellini is capable building a winning team, even with the rebuild coming to save everyone.  The major reason people those fans refuse to believe is Tambellini and Kevin Lowe's inability to either keep or sign actual NHL players in Edmonton.  They both insist on throwing kid after kid overboard and hoping they all swim on their own.  This is a great idea if they were breeding hockey players, but it's a terrible way to build a team.  They chased Marian Hossa and Jaromir Jagr all over the planet and watched as Curtis Glencross walked.  They traded Raffi Torres for one of Doug MacLean's failed projects.  They watched as Marty Reasoner walked to the Southeast.  And most bizarrely of all, they traded Kyle Brodziak for syphilis blankets.

The Edmonton media rallied to promote the trade.  Mark Spector claimed Brodziak was entitled, other media members floated Brodziak's attitude in the room and fans jumped all over him as soft.  Like those that went before him, the Oilers chose not to replace Brodziak, leaving the question of filling his role open.  And, as is their custom, the Oilers made it seem as if Brodziak was irreplaceable.

Eventually, this management team is going to accidentally acquire some players capable of playing the game.  Eventually.