Share All sharing options for: CHL Update - Making a case for Ryan Strome

This is Ryan Strome of the Niagra Ice-Dogs. No player has seen his draft stock rise the way Strome has. Just a season ago he was thought of to be a marginal top 60 selection, but he started off this season as the hottest player in the OHL making scouts notice his size, speed and creativity. Prevailing wisdom held that his start was just a hot streak and his production would slow down as the season progressed. However, Strome bucked the conventional wisdom. He has been a consistent point producer all season long and has been particularly impressive in the last two months where he has been scoring at a rate higher than 2 points per game. Now the question is how early in the draft will he be chosen? Is he a candidate for first overall draft choice? He has had the similar impact on his team as Seguin had on the Plymouth Whalers. His 1.66 p/g scoring is just slightly lower than 1.68 of Seguin last season.  Nate Seager of Buzzing the net(puck daddy's equivalent of a CHL blog) further highlights the similarities between Seguin and Strome by pointing out the following:

Here's something to consider: last season, Tyler Seguin factored into 45.1 per cent of Plymouth Whalers goals (only counting the games he played; he missed two). Strome, with 89 points for the surging IceDogs, is in that range at 42.8%

The difference is in goal scoring; while Seguin scored 48 goals for his team, Strome has been more of a play-maker, but on pace for 30+ goals. Another thing to remember is that Strome will not be turning 18 until after the draft. Then why is he not ranked among the elite of this draft? Smarter people than me are asking the same thing. Scott Reynolds was trying to find out why Strome is not as talked about. Lowetide pointed out that Ryan Strome has the highest Desjardin's NHL equivalency. It doesn't matter where the various scouting services have ranked Strome. I believe that he is in the race for being a top 5 selection and I think his rise mirrors that of Ryan Johansen. Nate Seager and Brock Otten of OHL prospects believe that Strome should be in contention for Red Tilson trophy (OHL MVP)

Could we really see back to back draft eligible players take home this award? It certainly seems likely. Strome has been a consistent offensive performer all season long and has recently taken over the scoring lead from Tyler Toffoli. The Dogs are now only 4 points back of Mississauga for the top spot in the East (and the entire league). Could voters really ignore the type of season and the type of impact Strome has had for Niagara, if they end up on top of the league?

However, a couple of games later, Strome suffered 'an upper body injury' due a dirty play by Joey Hishon and is out indefinitely. If Strome is out for the season, this could be a major setback for Strome and his surge towards a top 5 draft pick.

As usual, ZPG is Zero point games. Players in black are draft prospects for the upcoming draft. Players in copper are Oilers prospects. Players in red are first round draft picks from the previous draft and those in blue were drafted in 2009. 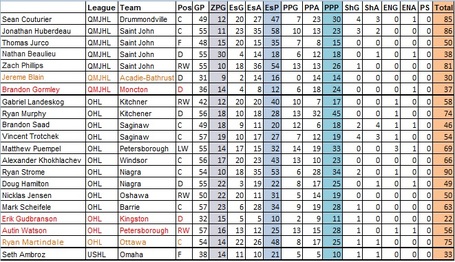 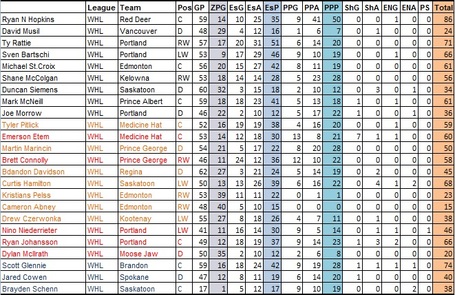