Hockey fans can also be great people. Sometimes it takes an unfortunate event to make someone go out of their way for an issue, but not always. Local philanthropist Brent Saik has long been a supporter of the Edmonton Cross Cancer Clinic, but the loss of both his father and his wife have made Saik up the ante.

The World's Longest Hockey Game will also break the previous Guiness Book of World Record's Record of 241 hours, which was set during the last game. There are 39 men and 1 woman playing this game that is run through volunteer efforts and runs 24 hours a day. Players play for shifts that are anywhere from 4-6 hours depending on how other players are feeling, the weather and the effects of frostbite. Usually, players are on the ice for 4.5 hour shifts and have a 6-8 hour break where they can eat, sleep or get a massage or other physical or medical treatment from professionals volunteering their time and expertise. 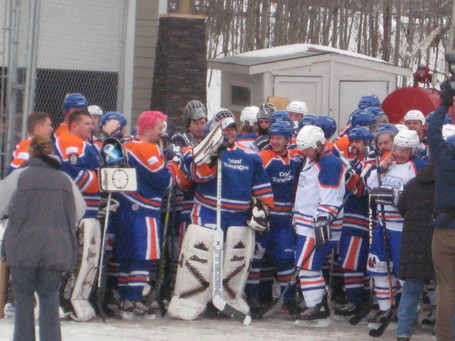 The schedule can change if there are injuries or if players develop frostbite. Always, there must be 5 players and 1 goalie on the ice for each team. For every shift, there is only one substitute player on the bench.What this means is that every player is on the ice for nearly their entire 4-6 hour shift.

In 2008, one of the teams lost a number of players to frostbite for a couple of days, shortening their bench. To combat that, all of the shifts became shorter, but then so did the breaks between shifts. The other issue with injuries is that a player is never allowed to leave the site during the course of the 10 days. If a player is injured to the point where they require hospitalization, they are not allowed back to play. To this point, thankfully, no one has had to leave the game.

This year the injuries have thus far consisted of groin pulls, hamstring pulls, stitches, lots of blisters and a few cases of frostbite.

In the first couple of days, it got to the point where it was treacherous to play. The ice was soft and with the warm temperatures, they were unable to flood the rink. The cooling temperatures were seen as a blessing, but perhaps the mid minus thirties is a little much.

Through it all, the players have remained positive and are still asking for people to come out and cheer them on. A single person cheering can lift the spirits of all the players involved. The reason why the players are doing this is still to raise a million dollars for cancer treatment. At this point, the teams have raised approximately $600,000 and are still far from their goal. Donations can be made at Saiker's Acres or on the Alberta Cancer Foundation page. 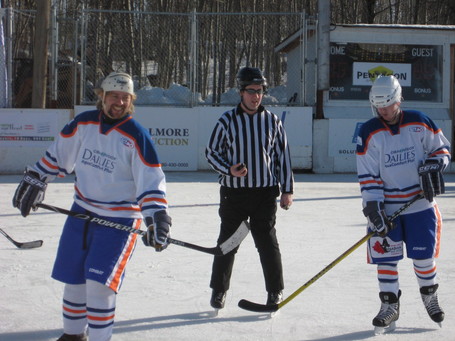 When asked what difference this fund-raising, and this machine will do for the people of Alberta who will be treated at the Cross Cancer Clinic Saik (pictured left above) Thursday afternoon said "The machine we are going to buy, I promise will save a life the first two minutes it goes in." Saik believes in his cause, so much so that he has opened his home and his heart to everyone. He also believes that the money will be raised, that people will come together.

Here are some more photos from the game. All photos are courtesy of Trisha Freerksen, all rights reserved. 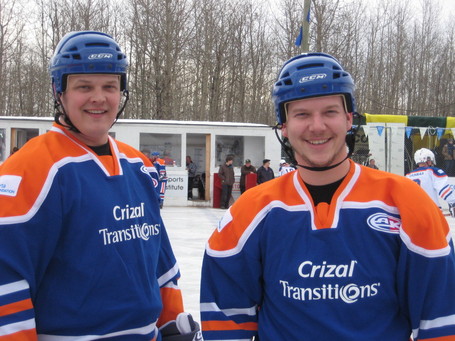 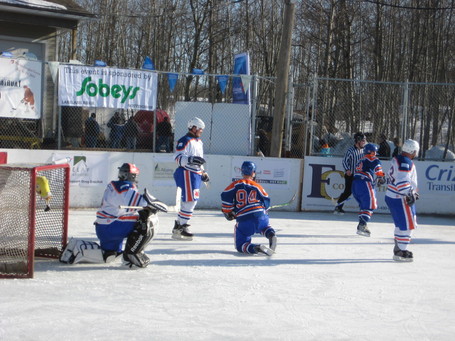 The latest update February 18th at 1AM is: