Share All sharing options for: PK Save Percentage in 2010-11

Each year one of the things I like to look at is how teams are being helped or hurt by things that, in general, aren't all that sustainable.  One of those things is save percentage on the penalty kill. Because goaltenders face so few shots while killing penalties, the results tend to be volatile over half (or five eighths of) a season.  Over the long haul, no goaltender can sustain a save percentage above .900, but it's not uncommon to see over smaller samples, which means that those teams with a goalie working the percentages can expect to see some regression from their goaltender, and that will likely carry over into the standings.  It doesn't matter a whole lot for the Oilers (although I'm sure you can guess where Nikolai Khabibulin will slot in on this list), but for teams on the playoff bubble, an extra point or two may well be the difference between getting in and being left out.  So which goalies have benefited by a high save percentage while penalty killing so far this season?  We'll look at that after the jump.

In the chart below, I've included all of the goaltenders who have faced at least 100 shots in the NHL.  There were thirty-nine goalies who met this criterion, and their average PK save percentage so far this season, is .876, which is the benchmark I decided to use for the "goals saved above average" statistic, even though the longer-term trend suggests that including all NHL goaltenders, the average is closer to .866.  Here are the results: 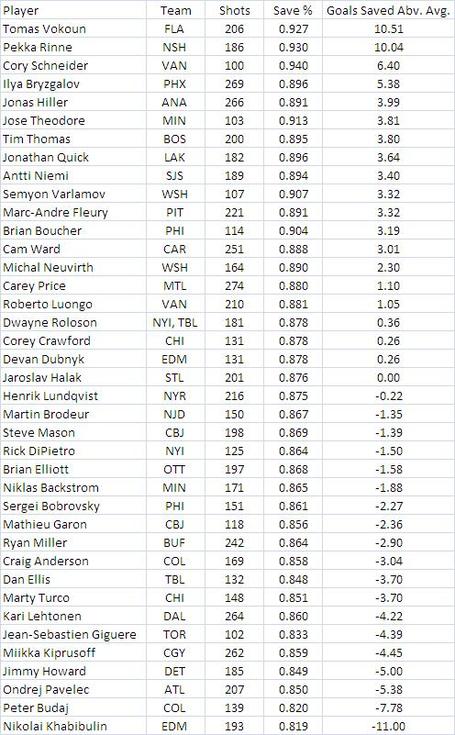 One of the most interesting things to me on this list is the group doing poorly - many of these goaltenders have a long track record of poor play on the penalty kill, so while we might expect something of a bounce-back for players like Nikolai Khabibulin and Peter Budaj, they also deserve to be at the bottom of this list based on their play since the lockout.  Others who are performing below the league average shouldn't expect any regression at all.  Players like Marty Turco, Kari Lehtonen, and Craig Anderson are all stopping pucks at a rate similar to what they've managed over the course of their respective careers.

At the top end of the chart, this isn't really the case.  Obviously no one is putting up the numbers that Tomas Vokoun and Pekka Rinne have managed over the long term.  In Vokoun's case, he's been very close to the .876 benchmark since the lockout, while Pekka Rinne hasn't really had enough shots to judge his long-term performance.  Each of them has been good enough on the penalty kill to earn about three standings points (rule of thumb: six goal differential = one win) as compared to their competitors.  In Nashville's case, those three points are incredibly valuable, especially considering the close playoff race in the Western Conference.