The Barons and the Playoffs

Share All sharing options for: The Barons and the Playoffs

The Oklahoma City Barons are pretty clearly one of the eight best teams in the AHL's Western Conference.  Their +17 goal differential is tied for fourth overall in the Conference, and their points percentage of 0.583 puts them in a group of eight teams well clear of the rest of the pack.  In the past, I've mused about sending players like Jeff Petry, Linus Omark, and even Magnus Paajarvi and Jordan Eberle down for a playoff run if they're happy to do it.  An already strong team adding talent like that could help the Barons to a long playoff run, which would in turn help them to establish themselves in Oklahoma City, and would provide the players with a chance to win together, an experience that they could hopefully duplicate in Edmonton the following year.  There are obviously some potential snags in this plan, but one of them is pretty big: if the playoffs started today, the Barons wouldn't qualify. 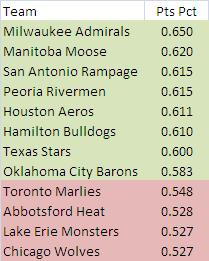 Unfortunately for the Barons, because of an incredibly unbalanced schedule, that's not how playoff positions are determined.  The AHL website explains:

If you're a longtime fan of the NHL, the divisional format is familiar, and if you're a fan of the CFL (and I wouldn't put it past some of our Oklahoma readers), then the crossover is familiar too.  Unfortunately, it's no good for the Barons.  Let's take a quick look at the West Division and then North Division standings: 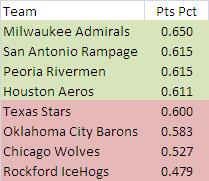 The Barons are just on the outside looking in both times.  There is, of course, plenty of hockey to play, but considering the amount of money the organization has invested in the Barons, it would no doubt be a major disappointment for them to miss the playoffs.  Here's hoping they pull it off.