Share All sharing options for: Surviving An Oklahoma Blizzard In Memorable Hockey Fashion

When the AHL schedule was released in mid-August of last year, fans were eager to see the newly established Oklahoma City Barons team play on several key nights. However, not very high on that list was the February 9th, 2010 School Day Game which is somewhat of a double-headed monster for two reasons. It is an incredible opportunity for school kids to see a Barons game, thus furthering the game in the community, yet at the same time is a nagging misfortune for season ticket holders, and adult patrons of the game that just can't make a 10:30am start time in the middle of the week. Needless to say, fans could expect a low attendance, lackluster play, and a crowd cheer that would be a full octave higher than your typical hockey game. But what could have been disastrous for the Barons organization turned into an incredible moment for desperate Oklahoma hockey fans.

In a somewhat odd February twist, Oklahoma City has been pounded by a two week window of winter weather that is a rare thing in the Sooner state. A hundred year old state record for cold temperatures was broken with the new tally being -31F, which reflected actual air temperature, not to mention the wind chill values dipping it towards -47F. The early months of February produced nearly 25" of snow in under two weeks. It goes without saying that this type of thing just doesn't happen in Oklahoma, and the great people in this state neither understand cold temps, nor do they know how to deal with the problems that it brings (driving, snow shoveling, bundling up, frozen pipes, building a proper snowman).

After round one of brutally cold temperatures and 12" of snow, Oklahomans braced themselves for another round that promised much of the same characteristics of the first wintry blast. Lying in the center of it all was a Wednesday morning hockey game in downtown Oklahoma CIty. With school closings and ugly road conditions on our minds, the Barons released a statement on Tuesday morning claiming that the game the following day at 10:30am, would continue as planned. They cited the difficulty of re-scheduling a game of this nature, and the presence of both a visiting team, and AHL officials as reasons for not postponing the game. Indeed both the San Antonio Rampage (Phoenix Coyotes), the Barons opponent that morning, and AHL on-ice/off-ice officials arrived days prior to the storms entrance into central Oklahoma. This "perfect storm", if you will, was a juxtaposition that began as a great school day outing for elementary kids across the metro, but quickly became a downer as fans would certainly be turned off by the adverse travel conditions, and thousands were.

Upon arrival to the Cox Center, fans were unsure of many things. Were parking garages going to be open? Would I be able to buy a ticket? What about concessions? The roads were terrible. The wind blew snow across the front of car windows with hurricane force. Drifts nearly 3' tall leaned towards downtown buildings. For those that persevered, they found saving grace in knowing that you could indeed park in the garages, and you could buy a ticket, and you would be able to eat at the game. Knowing that you had braved the elements, and conquered the treacherous drive was a badge of honor that only a devoted hockey fan could display proudly.

As the puck drop neared it was different game-day from the get-go. No lively, darkened arena introductions on the ice. There was a pre-recorded version of the national anthem that blared through the sound system which had to be turned down a few decibels. There were no ice girls, no mascot; just you, the Barons, and a couple hundred of your closest "friends". The type of environment that just doesn't exist at hockey games.

As starting goaltender, Martin Gerber, glided across the ice for the first time that morning, he looked up into the crowd. First to the east, then to the west. Even from a distance, the man was in awe at the emptiness that had become the Cox Center. Later on we'd hear that the "official" attendance was 2,000, but if you were there you know that only 300 or so people were actually in attendance. Surely the lowest attended professional sporting event I've seen in my life.

The only concession stand that was open sold a dangerous combo of beer and cinnamon rolls. The team shop was a shiny beacon down dark corridors surrounding the inside icy surface. The typical view out of the western windows of the convention center was blocked by a downpour of bright, white snowflakes.

The game itself was earmarked by one of Martin Gerber's finest performances of the year, as the Barons defeated the San Antonio Rampage 2 to 0. Both teams played feverish, sharp, and exciting hockey. There were only six penalties the entire game which led to some quick exchanges. Gerber stopped all 33 shots that came his way, and the Barons took care of the Rampage on goals by Alexandre Giroux and Chris Vande Velde. All were pleasantly surprised to be rewarded with such a dynamic game.

It's rare that you can view a single hockey game from as many angles as you want. From the rafters in section 408, to the glass-side seats, you had your pick of the best and the worst seats in the house. Many snuggled up to the players benches, while others cheered from behind the penalty box. With cameras in tow, many fans took shot after interrupted shot of on ice play, and bench camaraderie.

After a subdued version of "Sweet Caroline" (Ba-ba-baaaa) came to an end, and the final buzzer resounded, the Barons took to the center ice position, lifted their sticks high into the air, and lingered for several minutes. Clearly thankful to the several hundred in attendance, the Barons were basking in the glow of a strange victory. Arena announcer Ben Buckland encouraged those in attendance to head to the ice for a photo with the team. As 200 or so slogged onto the playing surface, the team surrounded the fans, and posed for a memorable photo, one that will be remembered for a long time. Even the latest Barons roster jumper, Zack Stortini, hung around on the ice and chatted with fans who lingered after the photo.

With all the talk of outdoor games being a return to the roots of hockey, for most people living in Oklahoma watching a hockey game in the Cox Center is OUR hockey roots. When you strip down the game of hockey to its most purest form it's about physicality and emotion. That raw excitement that comes from the field (or ice) of competition pushes those two things to the finest, and most inspiring moments in sports. Under the strain of bitterly cold temperatures, and blistering winter weather, the truly dedicated fans of hockey in Oklahoma experienced just that - an inspiring game. From the eerie quietness during the National Anthem to the ominous clanging of a Colin McDonald shot off the pipe, the preparation of a dismal day for the Barons organization had a bright side in that they inadvertently gave fans an interesting perspective on the game. Sure there was a stack of money lost in tickets sales, concessions, and merchandising that day, but in the end they added a few more fans to the "dyed in the wool" fans of Oklahoma City hockey. What a way to survive an Oklahoma blizzard. 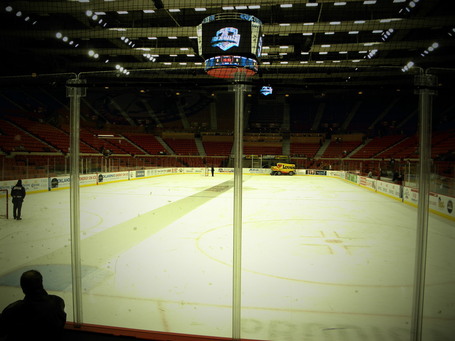 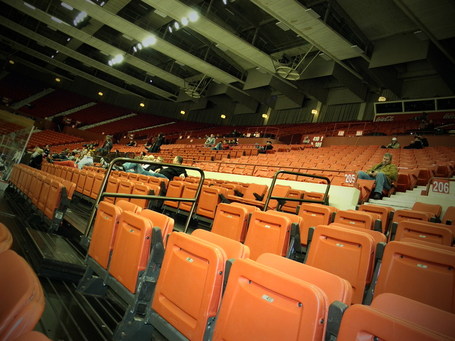 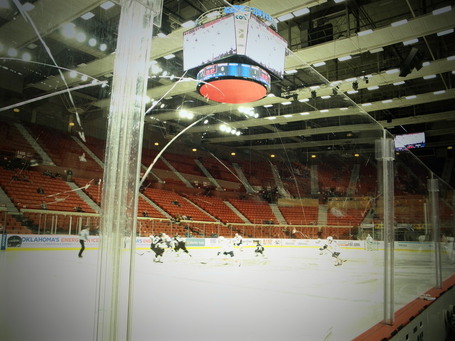 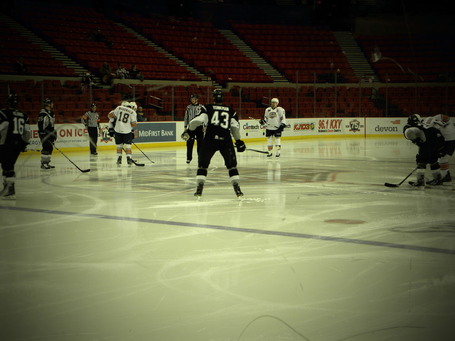 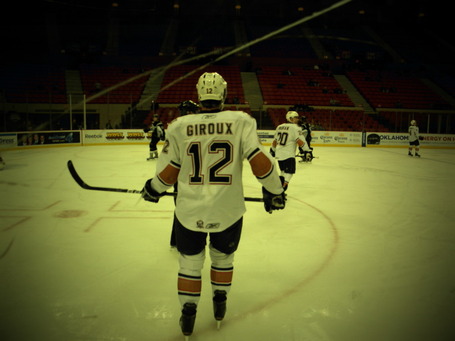 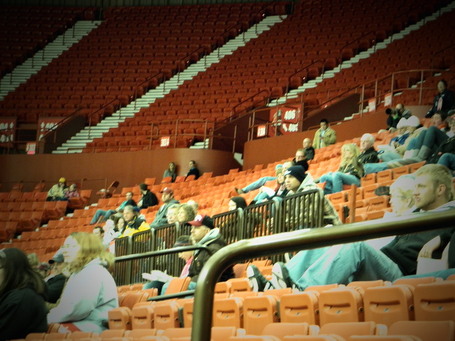 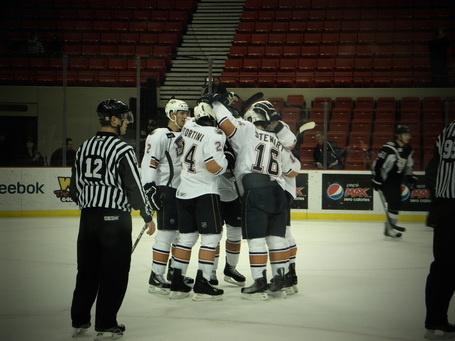 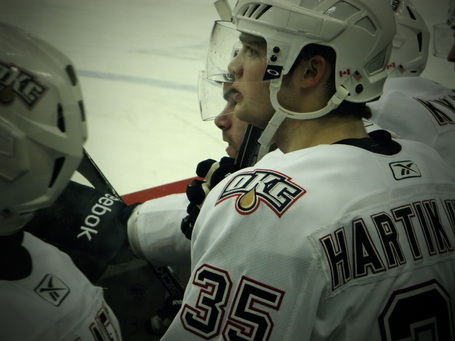 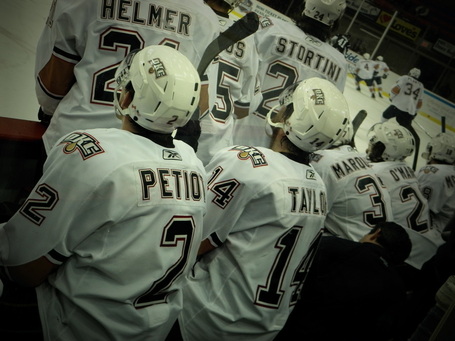 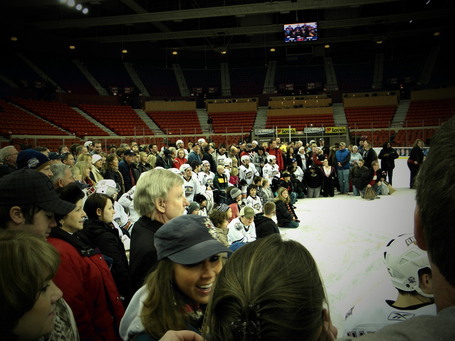 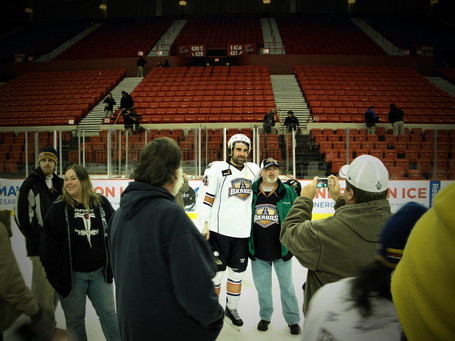