The Best Young Line In Hockey (It's Not Who You Think. Nope, Not Them Either.)

Share All sharing options for: The Best Young Line In Hockey (It's Not Who You Think. Nope, Not Them Either.)

A few short years ago, the Colorado Avalanche were one of the worst possession teams in the NHL. They were extremely young and partly due to that, overwhelmed on a nightly basis. They were heavily outshot and spent an enormous amount of time digging pucks out of their own end. But they rode some hot goaltending and lucky shooting percentage to the top of the conference and held on to make the playoffs as the 8th seed in the West. Joe Sacco was discussed as the coach of the year (he was a finalist in the Jack Adams voting) and Greg Sherman was highly-regarded by the media as a bright GM at the helm of a quick turn-around. They were 2009-10 model of this year's Minnesota Wild.

They crashed back to earth last season, however. Even though they improved their possession numbers, the Avs didn't get a couple of months of all-world goaltending from Craig Anderson and the bounces weren't as plentiful as they were the year prior. Avs' fans were calling for Joe Sacco's job and wanted a pound of flesh from Greg Sherman. They finished 29th in the NHL and "won" the second overall draft choice in the 2011 NHL draft.

Though a number of dynamic centres and one franchise defenseman were available, the Avs went with the tough-as-nails right wing from Sweden, Gabriel Landeskog. Landeskog was regarded as the most "NHL-ready" prospect in the draft, as evidenced by his scouting report by NHL De-centralized Scouting:

Gabriel does remind me of former Kitchener Ranger (and Philadelphia Flyers captain) Mike Richards. He sticks up for his teammates and is as strong at both ends of the rink as any player in the draft this year.

But Landeskog was also regarded as the prospect in the top group with the lowest ceiling. Landeskog made the Avs out of training camp and Sacco found a home for him on the right side of the Avs' third line with Daniel Winnik and Ryan O`Reilly. Even though Sacco decided to break up the line in mid-November in a search for scoring, the Winnik - O'Reilly - Landeskog line was and is the best young line in the NHL. 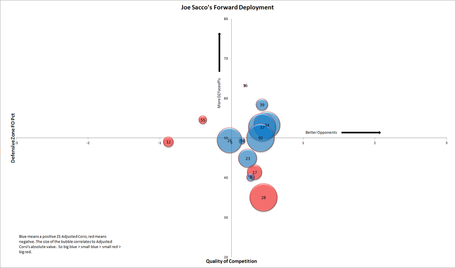 The blue glob in the upper right quadrant is the W-O-L line. While the forwards haven't separated themselves via Qualcomp W-O-L are head and shoulders above the rest of the squad by the possession numbers. The chart shows qualcomp on the x-axis, defensive zonestart percentage on the y-axis, color indicates positive or negative zonestart adjusted Corsi and the size of the bubble is the absolute value of the adjusted Corsi. In other words, the giant blue glob formed by the W-O-L line is good, very good and it's showing up in the team's possession numbers.

How significant was the W-O-L line's performance? 362 forwards have played 15 games or more in the NHL so far this season and the entire W-O-L line ranks in the top 25 in zonestart-adjusted Corsi, with the rookie Landeskog 4th overall in the entire league. Four other teams have three players in the top 25 league-wide, those players are listed by team below.

The W-O-L line is keeping pace with some of the most well-regarded possession players in the league, but by age, they're significantly younger than those other lines.

Though O'Reilly has been great, Landeskog's performance has been jaw-dropping. Though each scouting report noted his all-zones play and his willingness to work the boards and behind the net in both zones, I don't think any scout, any OHL analyst, any draftnik could have predicted the level of Landeskog's play through two months. I mentioned above that Landeskog ranks 4th in the NHL in adjusted Corsi, an unthinkable number for a rookie. Below are the 24 rookie forwards who have appeared in 15 or more games thus far. I've broken them out by their qualcomp rank on their own team. That ranking is noted in the far right columns, i.e. Landeskog ranks 5th of 12 Avs' forwards in rel. Corsi qualcomp. The top table contains the players who have taken on top six qualcomp thus far.

Landeskog is killing it compared to his rookie peers. In this group of players facing top six minutes, Landeskog is the youngest by three years. Smith is 22, Frattin 23, and Greening and Johnson are both 25. Not only that, the gap in adjusted Corsi is so large it's almost unbelievable.

The other group - the group playing bottom six minutes is listed in the table below.

The closest rookie to Landeskog is Montreal's Aaron Palushaj, but he's playing 4th line minutes, as are Sean Couturier, Ryan Johansen, Marcus Kruger and Dale Weise, the next four by adjusted Corsi rank.

It was a few long years in the Wilderness for the Avs, but now they're starting to own even strength play all thanks to a couple of kids. They're apart now and getting some bounces, but if things turn south for Joe Sacco, he would do well to reunite the W-O-L line. As for the Avs' low-ceiling rookie, if this is his ceiling, Avs fans are going to be a very happy bunch even without any growth in Landeskog's game. If he does see incremental growth over the next few years, Gabriel Landeskog will go from possession demon to superstar.