Share All sharing options for: Kirill Tulupov's Long Journey To The Show 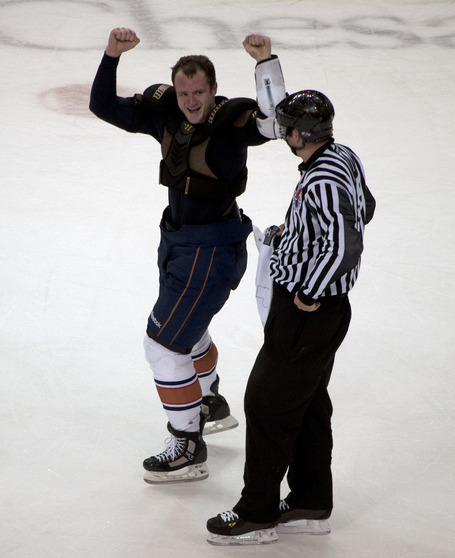 Yes, it is the only place I want to play – the NHL. It’s a dream for me. I recall the experience that I had in Edmonton, how great it was to step back on the ice with 20,000 people watching you play, how many emotions, how many things you want to do for the fans. It’s like when you are down 3-nothing you can hear a fly flying around you in the arena packed with people, but when you are winning, making it back to 3-3 and end up winning the game or at least tying the game, you feel the difference and you want to do it from night to night. Just for the fans, the organization, how big is this show, this love for hockey, how great the players are, just battling on that high level – it makes you better. There is nothing like NHL for a hockey player.

--Kirill Tulupov, in his interview with Patricia Teter.

Kirill Tulupov's story is an excellent one. Tulupov was drafted in the third round in 2006 (#67 overall) by the New Jersey Devils. He spurned Lou Lamoriello's ELC offer and was stuck in Lou's doghouse until the end of his QMJHL career, when he was set free as a UFA by the Devils. Since leaving the Q, Tulupov has played for HC Slovan Bratislava, Spartak Moskva, Krylia Sovetov, Molot-Prikamie Perm, Sary-Arka Karaganda and now the Oklahoma City Barons.

The massive defender, 6'4" 230 lbs, is a fearsome hitter, best showcased by his huge hit on Ben Eager in the Joey Moss Cup. He's a tremendous fighter as Lance Bouma found out earlier this season. The picture above is Tulupov celebrating and working the crowd after his brawl with San Antonio's Brian Sutherby. His love of the crowd is why we've made Kirill and his fight celebration our December wallpaper. Once again, our wallpaper has been provided by the extremely talented Candace Riley. Candace writes about the Barons at the OKC Barons Hockey Blog.

You can find the high resolution version of the wallpaper here. You can also peruse Candace's impressive collection of photos and buy prints of her best work at SmugMug.

Tulupov talked to Teter about the fight:

PT: Your fight – and I am not certain it should even be called a fight – perhaps a smack down? – with the Abbotsford player [Lance Bouma] in the Barons vs. Abbotsford Heat, November 18th game was very impressive. Oklahoma City fans loved it! What happened – what instigated the fight?

Tulupov: As far as I know he is a fighter. Calgary took him for that reason. He just pissed me off. I was just there on his way and he slashed me for no reason and it was a painful slash and I don’t know what made him do it. I was about three or four feet away from him or even more than that. He passes by and slashes me. I was pretty fired up for the game anyway – I don’t know, maybe he was in the wrong place and the wrong time. [laughing]

PT: I’d say so! He went down very quickly!

Tulupov: He’s lucky the referees were there.

But Tulupov isn't all grit and brawn. He's extremely fast and agile. He describes himself as a multi-dimensional player:

I’m strong. I’m fast. I’m maneuverable. I like to be physical. I like to use my body. Just because I train and there is a reason why I do it, I want to have a reputation and I hope soon enough that it will pay off for me, so I don’t have to do much of a job out there just because forwards will decide to enter the zone from the opposite side of the ice. There are things I have to show because I cannot be saying right now that I have a great skill and stuff, I just cannot say it right now because I have not showed it. I have to prove it first and then I can speak about it.

Tulupov is going to have every chance to prove it. Huge, agile, big-hitting defensemen with a willingness to fight are a rare breed in the NHL, and even if he doesn't get a contract with the Oilers, he's demonstrated an array of physical skills that will keep teams interested for a couple of years. He's playing the season on an AHL contract, but will likely land a two-way deal by the end of the season.

Tulupov goes on to talk about his development, his father, the QMJHL, fans, his Youtube videos, practical jokes, Igor Larionov, and much more. I cannot recommend Teter's interview enough, - it's a deep look inside the mind of a guy trying to make it. Tulupov hasn't been brainwashed by the power of the NHL cliche - his honesty is refreshing in the age of the typical "one-game-at-a-time" interview and his answers and nature make him an immediate sentimental favorite.

Interested in having your picture or original artwork featured as our wallpaper of the month? Let us know