After looking at the forwards drafted in 2011 and 2010 using NHL equivalencies over the last few days, I'll now move on to 2009, which means that we're checking on players in the middle of their third season after being drafted. This is one of my favorite times to check in because, in my view, this is the season where you really start to separate the wheat from the chaff. Any player worth his salt is out of the CHL, which means almost everyone is playing professionally or playing in the NCAA. Given that the NCAA guys are often playing their third consecutive college season, you tend to see them fly up the list, and their numbers tend to be the most suspect in this bunch.

Before I go ahead and put up the chart, a bit more explanation is needed. Not all of the players drafted in 2009 were the same age. Several players had already passed through the draft at least once (and sometimes twice). All of these older players are included in the chart but are marked in yellow. Other players were first eligible in 2009, but weren't actually drafted until 2010 or 2011. I've also included these players in the chart with "N/A" written in the "Draft Number" column, and if 2009 was their first year of eligibility, the yellow highlighting disappears. The "Team" column indicates the team that drafted the player rather than the team that holds his rights, so for example, Brayden Schenn is listed under "Los Angeles" even though he's been traded to Philadelphia. In addition, the "Draft Number" column is not the player's actual draft position but the player's position among forwards. So, for example, Magnus Paajarvi was drafted by the Edmonton Oilers 10th overall, but was the 7th forward to be drafted, so his "Draft Number" in the chart is "7". I've broken the chart into four portions to make it easier to read, but it's still quite small, so you may want to click to enlarge a portion by clicking on it. 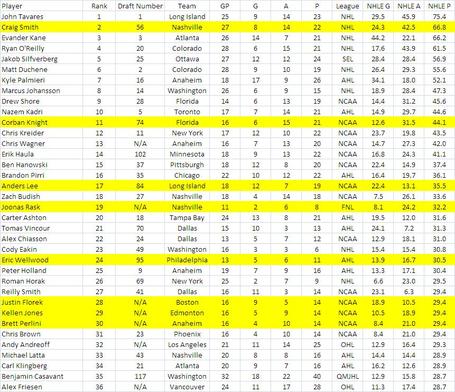 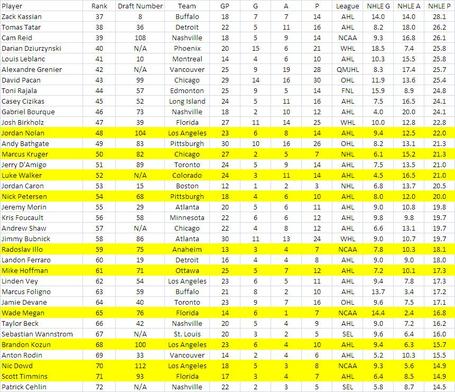 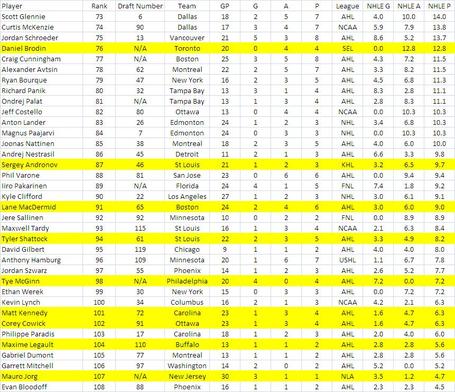 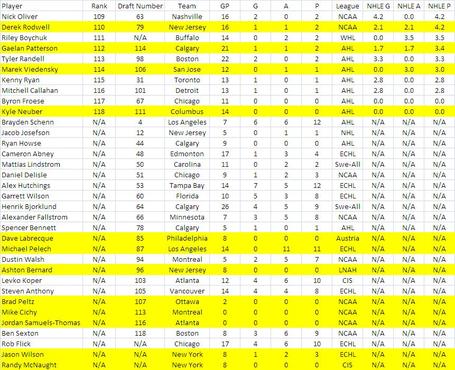 So, as mentioned, many of the guys moving way up the list since last time are players who have been in the NCAA for a good long time. Some, like Drew Shore, had outstanding seasons as sophomores too, so I'm more inclined to believe in them as prospects. Others, like Chris Kreider, Chris Wagner, and Ben Hanowski, are playing in their third NCAA seasons and have taken huge leaps forward (all three have as many or almost as many points as their season totals from a year ago), so I have a little bit less faith that they'll be able to make a seamless jump after turning pro.

The players who look really good are the ones putting up big numbers in professional leagues. The guys in the NHL we already know, but other guys like Jakob Silfverberg, Kyle Palmieri, Nazem Kadri, and Brandon Pirri are still top notch prospects doing very well in tough leagues. Incidentally, none of these players are rookies in their current league; the last three are all in the AHL, and are all playing in their second AHL season, which brings us back to the point I made when talking about the men drafted in 2010: it's extremely difficult to do well as an AHL rookie at a young age. The best AHL rookies in this class so far? Carter Ashton, Peter Holland, and Michael Latta.

Latta, is a draft pick of the Nashville Predators, a team that's getting incredible mileage out of this draft. The team's first-round pick was defenseman Ryan Ellis, who's generating very impressive offense from the blue-line as an AHL rookie (15 points in 20 games). They also plucked Latta in the third round; the man in second on this list, Craig Smith, as an overager in the fourth round; and promising power forward Zach Budish in the second round. It's a very impressive group.

A group that's looking less impressive is Edmonton's. Magnus Paajarvi and Anton Lander are both examples of players really struggling to find the range at the NHL level. Other NHLers who aren't on the first page are Marcus Kruger, Jordan Caron (who was third overall on this list playing in the NHL last season), Kyle Clifford, and Jacob Josefson. Fair to say that they're ahead of many of the guys listed ahead of them, but also fair to say that this season has been a challenge.

The other Oilers listed are higher, but don't look like anything special. Kellen Jones is having a nice year in the NCAA, but he's older than most of this class, and still well down the list; Toni Rajala is having a decent year in Finland, but he'll need to take a big step forward before it's worth his while to come (back) to North America; and Cameron Abney stinks, but he wasn't drafted for his offense anyway.