The cycle is an integral part of hockey, especially at the NHL level. The purpose behind it is to allow you to maintain control of the puck while you attempt to break down your opposition’s defence in order to generate a scoring chance.

This week will be a bit of a primer on the cycle, focusing primarily on positioning for support as well as where to look for outlets. Next week will be more in depth, focusing on how break down the opposition by using the cycle.

Much like the 1-2-2 forecheck from last week, the triangle is an integral part of the cycle. Not only does it provide outlets, but it ensures that help in the form of a second man is close by as well as proper defensive coverage in case of a turn over.

If you are into diagrams, this is your day. There might be more diagrams than words.

In the following example, we are going to rotate puck around from the LW half wall to the RW half wall and see the various outlets and potential plays available to the puck carriers as well as the support players. 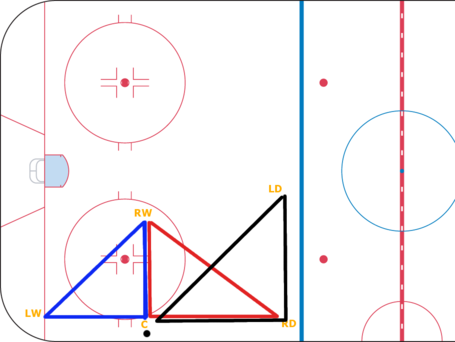 As you can see, there are 3 support triangles available here. From this position, the puck carrier has multiple outlets. The reason why we treat it as three support triangles is because this is also where the opposition will have the most presence, so whoever has the puck has to know where the pressure is coming from and where he can outlet it too.

For the purpose of this example the C is going to work the puck low and he can do that by either carrying the puck low, or passing it low. If he carries it low, the LW is going to stay on the wall and slide away from him creating space. If the LW stays there, it allows the opposition to double team the puck. As the offense, you want to maintain possession, not create puck battles on the boards. The RW is going to head to the boards to support along the wall. He heads there because as soon as the opposing defenseman picks up a loose puck, he’s going to try and put it along the boards, especially if he’s fighting with a forward. 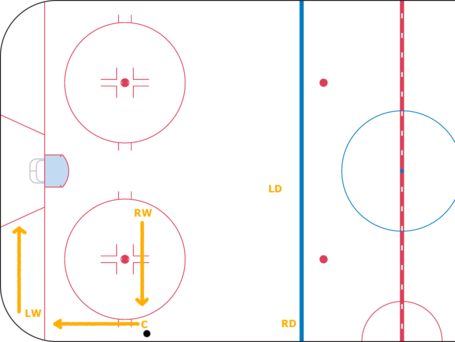 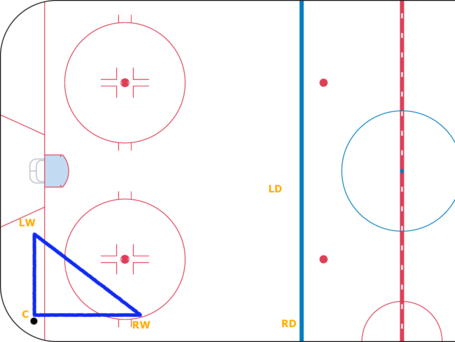 If the C passes the puck, it’s the RW who rotates down instead (the C stays along the boards). It’s the same positioning, just a different player moving. The puck carrier has 2 outlets to pass to as well as help from either side in case of a double team. 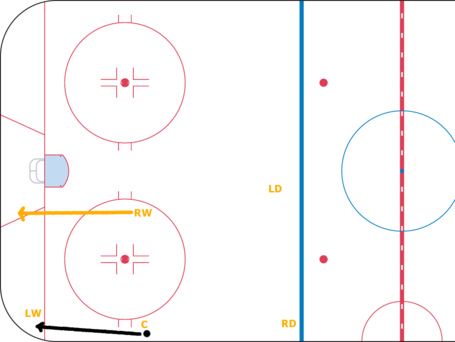 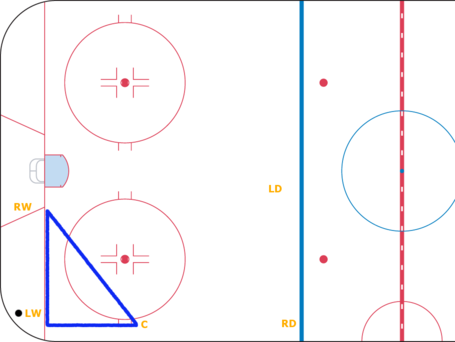 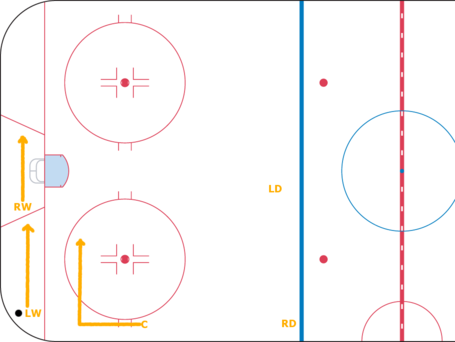 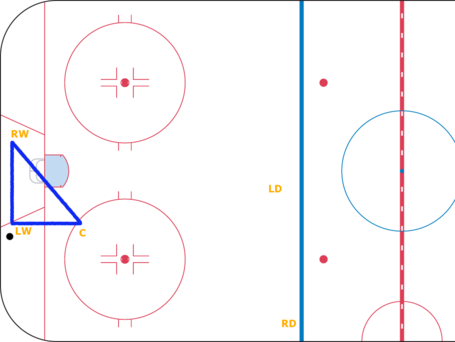 The reason why the C follows low first is in case the LW runs into trouble and has to reverse the puck. Up until now, the forwards were using the boards to help control the puck in either direction. Once the play moves behind the net, you lose support on one side because you still want to keep a forward high. This is generally the safest method to try and push your cycle to the other side of the net because you have a forward already there and it’s easy to continue the rotation.

From here, it doesn’t matter if the puck carrier passes the puck or continues to carry it. The high forward is going to follow the puck right across the net and out the other side. If he passes it, the C then has to be ready to get to the far wall in case the RW has to put it into that empty area of the ice. 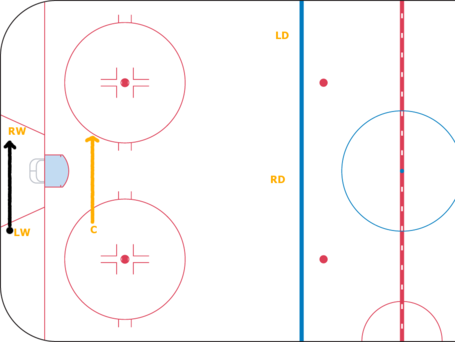 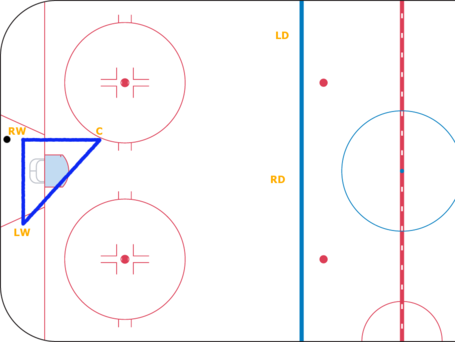 If the RW passes the puck to the open corner, the C goes after it and the LW has to go back up to the slot and then across to the boards if the C is able to get to the puck. He wants to go high and to the middle first in so that he’s in good defensive position in case there is a turnover. Once he’s good defensively, he can then slide over and continue the cycle. 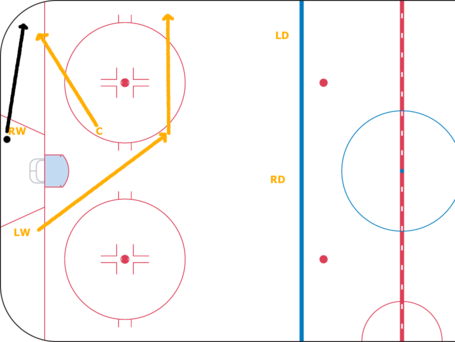 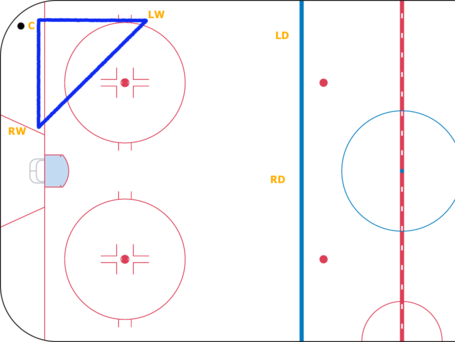 If the RW carries the puck over, the C and LW will slide right across, with the C covering high and the LW providing low support. 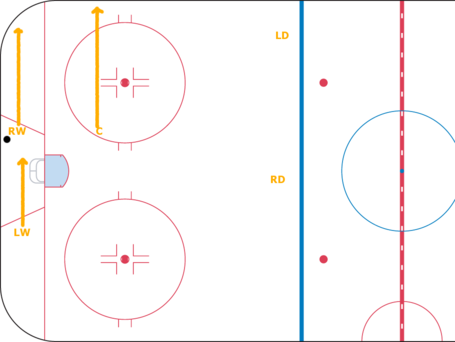 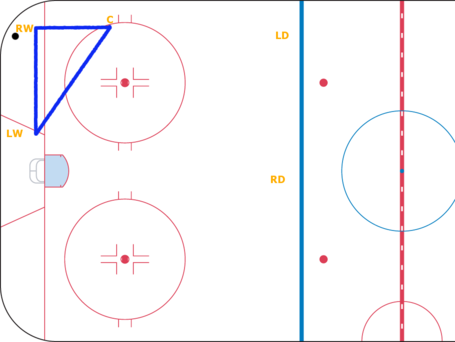 If we look at the alternate way to get behind the net, the LW passes the puck along the end boards to the RW, The C follows right to the area in front of the net and the LW stays there. 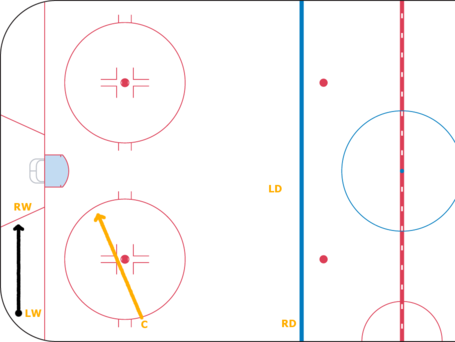 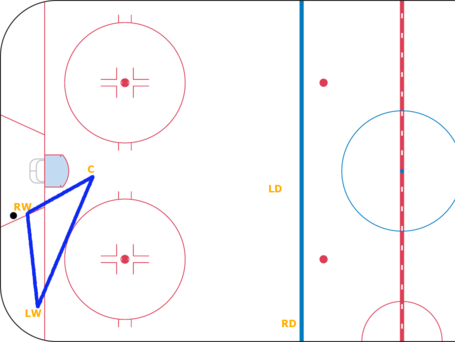 The difficult part about this play is that in order to continue the cycle around the net, the RW has to carry the puck, or risk putting it into the open corner and hoping the C gets there in time. If he doesn’t, there’s no support on that side and you have 3 forwards stuck pretty deep in the zone, especially of the LW doesn’t react in time. Generally speaking, it’s this situation here that causes 3 on 2 rushes off the cycle. When he carries the puck, the LW is going to follow him behind the net, and the C is going to follow him across the front. 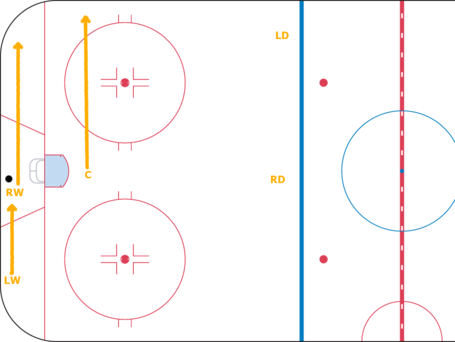 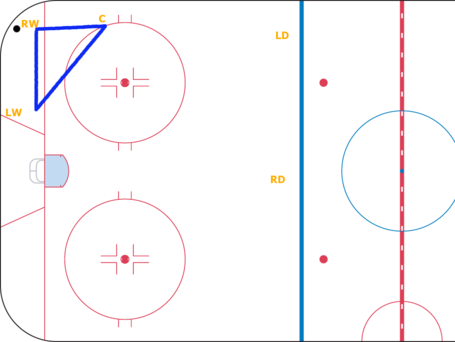 If the RW dumps the puck into the open area, the C will chase the puck and the LW will head high into the middle of the zone and then across to the boards if the C is able to get to the puck. 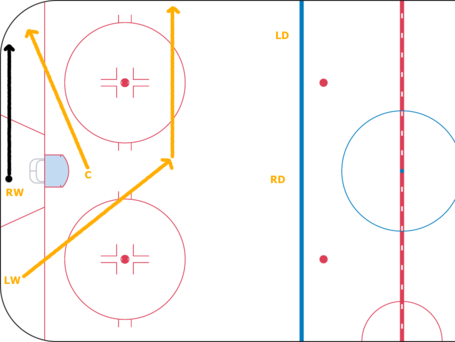 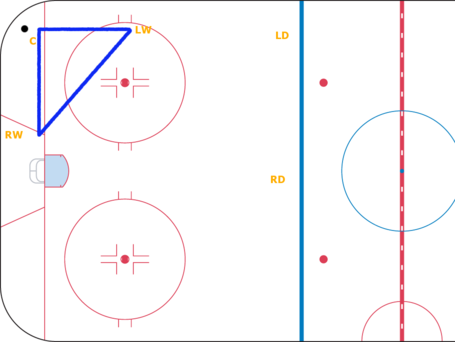 To finish off the cycle, we want to move the puck up to the LW half wall. If the C carries the puck up, the RW is going to follow along the boards and the LW is going to rotate out, which is going to give us a similar setup as we had when we started. 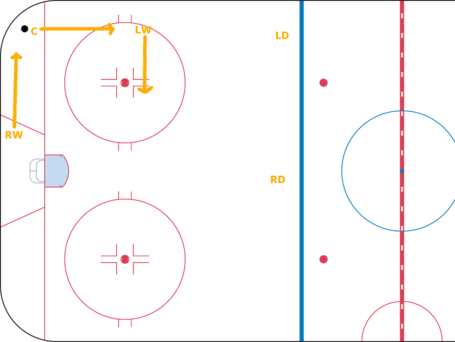 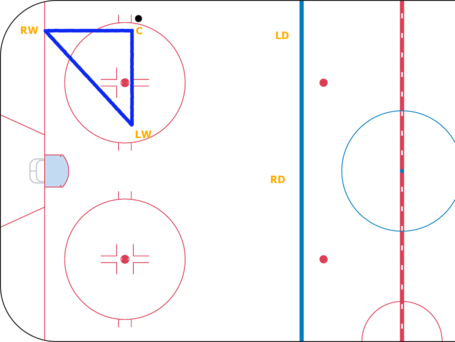 If he passes it up, the RW is just going to go from behind the net to up in front, which again puts us in the same position as we started with. 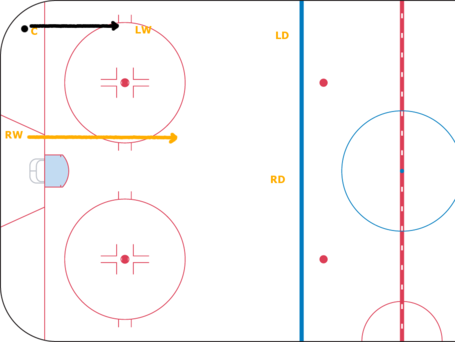 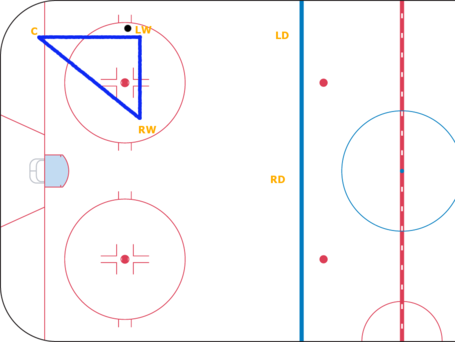 You can sort of see that the cycle is susceptible when you are trying to transition from one side of the offensive zone to the other. Next time you watch a cycle turn into an odd man rush the other way, look at where the support was and how they tried to transition the puck. The cycle is all about puck support and maintaining some defensive responsibility while attempting to generate offense. Next week we’ll look at how to transform parts of the cycle into offensive chances.