Yesterday, I spent some time looking at how all of the forwards drafted in 2011 were doing offensively so far this season by using Gabriel Desjardins' NHL equivalencies. Today, I'll do the same thing for the 2010 draft, which is a draft class that Oilers' fans have been very excited about in the past. In addition to Taylor Hall, last season's list had Curtis Hamilton, Ryan Martindale, and Tyler Pitlick all among the top forty. Now that all three players have turned pro, we'll take a look at how things have changed.

Before I go ahead and put up the chart, a bit more explanation is needed. Not all of the players drafted in 2010 were the same age. Several players had already passed through the draft at least once (and sometimes twice). All of these older players are included in the chart but are marked in yellow. Other players were first eligible in 2009 or 2010, but weren't actually drafted until 2011. I've also included these players in the chart with "N/A" written in the "Draft Number" column, and if 2010 was their first year of eligibility, the yellow highlighting disappears. In addition, the "Draft Number" column is not the player's actual draft position but the player's position among forwards. So, for example, Tyler Pitlick was drafted by the Edmonton Oilers 31st overall, but was the 22nd forward to be drafted, so his "Draft Number" in the chart is "22". I've broken the chart into four portions to make it easier to read, but it's still quite small, so you may want to click to enlarge a portion by clicking on it. 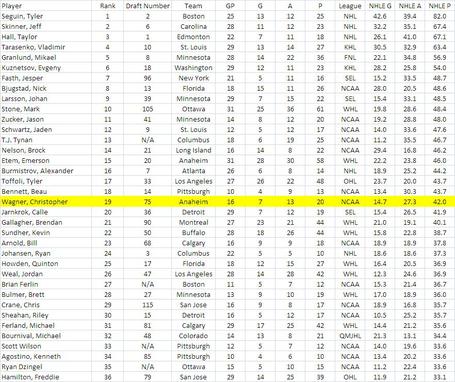 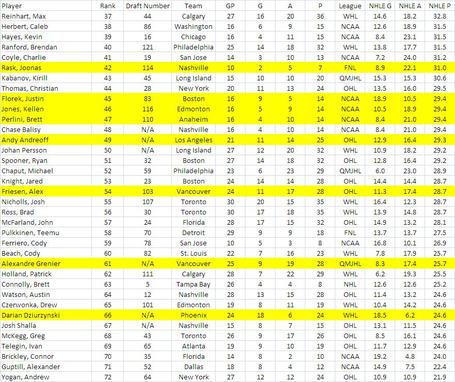 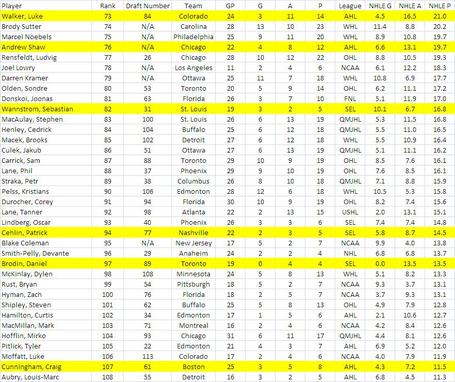 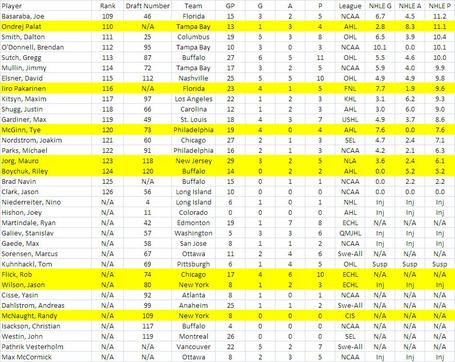 Starting at the top, there have been some pretty major changes from last season. Tyler Seguin was well down the list a year ago, but vaults all the way to the top after a fantastic start in his sophomore season. And that sophomore swing is a common theme for a lot of the risers on the list. In addition to Seguin, Alexander Burmistrov has taken a big leap forward in his second NHL season, and second-year NCAA players like Nick Bjugstad, Brock Nelson, Beau Bennett, Bill Arnold, Chris Crane, and over-ager Christopher Wagner have also leapfrogged into the top thirty. The same thing is happening in Europe where Johan Larsson and Jesper Fasth have both done much better in their second SEL seasons than they did in their first. In other words, looking at the numbers is good, but context is also (very) important. If a player is moving up in level of competition, he may well struggle and look worse by the numbers than he really is.

Which brings me to the Oilers. Kellen Jones, Drew Czerwonka, and Kristians Pelss are ahead of Tyler Pitlick, Curtis Hamilton, and Ryan Martindale going by NHL equivalencies, but we all know that the latter are better prospects than the former. The difference is that those three all turned pro this year, and the transition from junior hockey to the AHL is very difficult. In fact, let's look at all of the players who moved into the AHL this year:

Not too many success stories. It's a tougher league, and a lot of these players aren't getting the same kind of ice time that they were getting in their junior leagues, which makes it tough to put up offensive numbers. No power play time and no time on the top two lines means not much offense. That doesn't make this process encouraging for the Oiler prospects (especially since the other players on this list were generally drafted in the later rounds), but it does mean that their experience is far from unique. Hopefully at this time next year, we see the sophomore swing in a big way!