Share All sharing options for: 2011 Draft - Forwards and NHL Equivalencies

It's always easy to get excited about the players your team has drafted in their post-draft season, especially if they're playing in the CHL (or, you know, in the among the NHL's scoring leaders). That's because there's a lot more to success in the NHL than offensive production, and a huge portion of the draft class has good enough offense at the junior level that it seems reasonable to at least consider these players for a spot in the best league in the world. For fans of the Oilers, this year's surprise point-per game junior is Tobias Rieder who actually has 34 points in 26 games. Looks good! But how does it compare with the rest of his draft class? After the jump, I'll look at all of the forwards who were drafted in 2010 using Gabriel Desjardins' NHL equivalencies.

Before I go ahead and put up the chart, a bit more explanation is needed. Firstly, not all of the players drafted in 2011 were the same age. Several players had already passed through the draft at least once (and sometimes twice). All of these older players are included in the chart but are marked in yellow. Second, the "Draft Number" column is not the player's actual draft position but the player's position among forwards. So, for example, Tobias Rieder was drafted by the Edmonton Oilers 114th overall, but was the 71st forward to be drafted, so his "Draft Number" in the chart is "71". I've broken the chart into four portions to make it easier to read, but it's still quite small, so you may want to click to enlarge a portion by clicking on it. 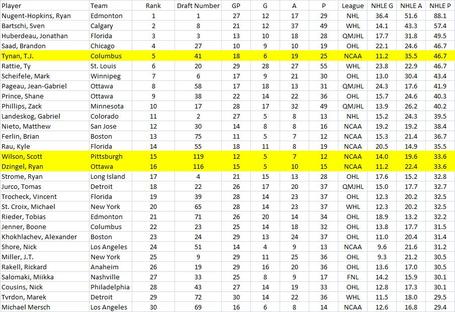 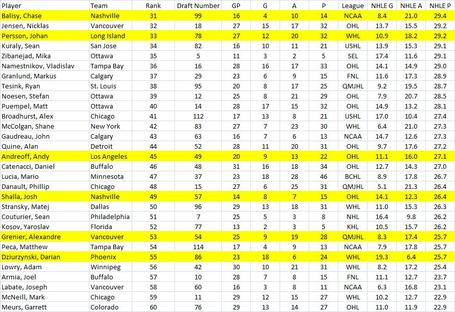 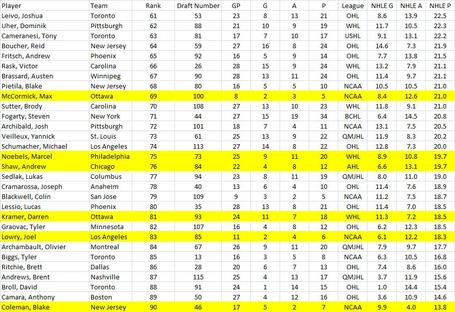 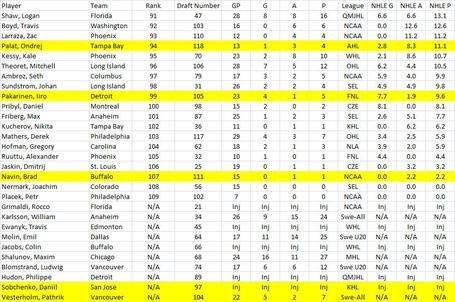 The top ten players on the list are, as always, a varied bunch. The first overall pick, Ryan Nugent-Hopkins, is having an amazing rookie season in Edmonton and blowing his peers out of the water. After that, there are a couple of sets of teammates (Sven Bartschi and Ty Rattie are both play for Portland in the WHL, and Jonathan Huberdeau and Zack Phillips both play for Saint John in the QMJHL) dominating in junior, later picks like Brandon Saad, Shane Prince, Jean-Gabriel Pageau having excellent post-draft seasons, and overager T.J. Tynan ripping up the CCHA with Notre Dame.

A couple of names are conspicuously absent from that list. Gabriel Landeskog, Ryan Strome, Mika Zibanejad, and Sean Couturier were all top-ten picks in last June's draft. For Landeskog, Zibanejad, and Couturier, falling a bit on this list isn't a big deal. All three are playing in very tough professional leagues, and even though NHL equivalencies are trying to provide a level playing field, the reality is that it's tougher to post a good number in a pro league than it is in a junior league. For Strome, the good but not great number is more concerning. He's playing another season in the OHL, and just isn't dominating like you'd expect. His numbers are good, but only good enough for third on his team in points per game (behind defenseman Dougie Hamilton, and forward Freddie Hamilton), which is less than you'd expect from a player chosen fifth overall.

As for Tobias Rieder, it's pretty easy to see that he's beating his draft number handily, and is one of just twenty-eight forwards drafted in 2011 with an NHL equivalency of 30.0 or better. He leads his own team in scoring by seven points and has already come close to matching his goal total from last season. In fact, Rieder is third in the OHL with 20 goals behind just two players: Tanner Pearson, a 6'0'' winger with 60 points in 28 games who has now passed through the NHL draft twice, and Tyler Toffoli who led the OHL in both goals and points in 2010-11. In other words, Rieder is having an excellent start to the year. Still might be a step or two behind Nugent-Hopkins though.