Oilers Collapse, Lose 5-3 To Flames Thanks To Tom Renney

Share All sharing options for: Oilers Collapse, Lose 5-3 To Flames Thanks To Tom Renney

The thing about a great rivalry between two crappy teams is that the game stinks no matter how much the media and fans talk about passion and hate. Even worse is a great rivalry in which one team is really bad and just gets beat on continually. Tonight's Battle of Alberta is an example of the latter. The Flames have been beating on the Oilers for a couple of years and it's just not fun to watch.

This time around things seemed like they were going to be different. The Oilers scored twice in the first three minutes, then watched as the Flames scored twice in the next four minutes. It didn't get better in the second period either. The Oilers were outshot 27-18 through two periods with Sam Gagner - Shawn Horcoff - Ales Hemsky accounting for 7 of the 18 shots. Throw in Ryan Smyth and Jordan Eberle and the other 13 skaters only took 7 shots through two periods.

The third? Well, the third was a bloody mess. 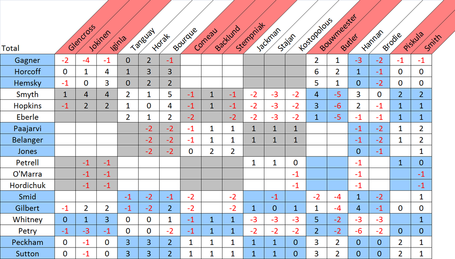 Sam Gagner has been very good for a couple of weeks now, but tonight was his best game of the year. He's as fast as he was during the pre-season and he's clicking with Horcoff and Hemsky. The best part of his 2011-12 game is his desire to shoot the puck. His shot rates and shot attempt rates are up this season, and though the pucks aren't finding the net, they will if he keeps firing.

Ales Hemsky and Shawn Horcoff continued their excellent play tonight. They're creating chances, playing extremely well in transition and they, along with Gagner, have been excellent in their own zone. Gagner has become the top line's shooter and it's working well for them.

Nikolai Khabibulin's pads. When he had to make a pad stop tonight, Khabibulin was incredible and he had to be, considering the toreador defense in front of him.

Andy Sutton took two terrible penalties tonight, a stupid roughing penalty in the first period and a ridiculous high stick in the second. On the high stick, he swatted upwards at a chest-high puck and missed. There aren't many legal things a stick can hit at face-level.

The power play was terrible tonight. The Oilers went 0-6 with 1 shot on goal with the man advantage. The Flames employed a highly-aggressive penalty kill strategy and attacked Hopkins on the half-wall very efficiently. Part of the problem was any time Hopkins took the time to survey the ice, the penalty killers jumped out on him to take away his passing lanes. In the future, Hopkins has to counter that by shooting very quickly, even before his teammates are fully set up. The penalty killers must respect his shot and willingness to shoot.

Nikolai Khabibulin's five hole was so easy to score on tonight, it must've looked like a soccer goal to the Flames.

Ryan Whitney....I don't want to beat a dead horse, but Ryan Whitney is moving like a dead horse right now. Never has Colby Cosh's "Barbaro" moniker for Whitney been more appropriate. He shouldn't be on the ice.

The Edmonton sports media is never one to cross the Oilers' organization, but they are collectively falling down on the job with regards to Ryan Whitney. He's not been able to skate since his first game back and no one is asking about it. One of the team's radio monkeys threw out some conditioning excuse, but anyone who has watched Whitney get beat in every way imaginable on the ice knows that he's injured. He's physically unable to move right now. So what does the media do? They do what the Edmonton media always does - nothing. Great work, people.

Tom Renney coached his worst game of the season tonight. The Oilers are at home, so he has the last change. He allowed the Ryan Nugent-Hopkins line to play against the Roman Horak line for two periods, even though that line beat the Hopkins line handily. Hopkins' scoring chances through two periods were 2 for - 7 against.

Even worse was his use of the 4th line. He rolled the 4th line out four times in the 3rd period, though twice it was without Hordichuk. Their second shift ended with the Derek Smith goal after Darryl Sutter got the Jarome Iginla line on the ice. Renney then threw Lennart Petrell and Ryan O`Marra out with 5 minutes to go. The two were pinned in their own end for most of the shift. Let's recap the decision making. Lennart Petrell is probably the worst (non-goon) even-strength forward in the league. Darcy Hordichuk is a goon. Ryan O`Marra is an AHL player. He was up against a team who outplayed his own team to that point, but he was still up by one goal. Why did he throw out one of the worst lines in the league? Why did he leave them out there, even when the opponent sent out his best player to take advantage?

Couple all of this with his insistence on sending a crippled Whitney out on his second pairing and it was an awful night. Much of this loss can be attributed directly to Renney's shortcomings. I don't give out Golden HUAs, but if I were to do so, Tom Renney would win in a landslide.