What Happened to Parity?

Share All sharing options for: What Happened to Parity?

One of the things that was supposed to happen with the arrival of the salary range was an increase in parity. Bad teams couldn't be all that bad because they were forced to spend and good teams couldn't keep all of their best players because success would mean a lot of talent out the door. That's why the Chicago Blackhawks sold Andrew Ladd, Dustin Byfuglien, and Kris Versteeg shortly after winning the Stanley Cup, and why the New York Islanders traded for a guy like Brian Rolston this off-season. These circumstances make the lack of parity in the league so far this season truly incredible.

The team that prompted me to take a closer look at this is the Boston Bruins who have a record of 16-1 in games decided by at least two goals and have a goal differential of +56 in just 33 games. That puts them on pace for a goal differential of +139 by the end of the season, which would be the best total since the Detroit Red Wings were +144 in 1995-96, a season that saw them set an NHL record for wins with 62 and go on to... lose to the Colorado Avalanche in the Conference Finals. But even without a Stanley Cup victory, it's fair to say that those Red Wings were a dominant team, and so far this season, that's what the Bruins look like as well.

But it's not just the Bruins. There are nine different teams in the NHL on pace for a goal differential of better than +60 (Boston, Detroit, Vancouver, and New York) or worse than -60 (Tampa Bay, Carolina, Long Island, Columbus, and Anaheim). If all nine make it, that would set a new record since the NHL moved to an 82-game schedule: 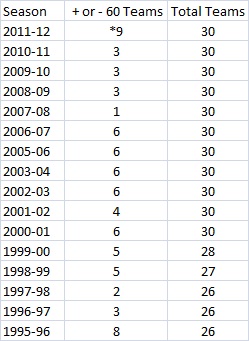 It looked like parity was increasing after a few years of the salary range being in place, which is what you'd expect, but this season has seen a huge spike. Of course, unlike all of the other seasons in the chart, this season is projected based on less than half a season; it's quite possible that a bunch of these teams will regress toward an even goal differential from here to the end of the year since a lot of these teams aren't just very good or very bad, but very good and lucky or very bad and unlucky. So how does this chart look if we compare this year's standings to the Boxing Day standings of previous seasons? Let's take a look: 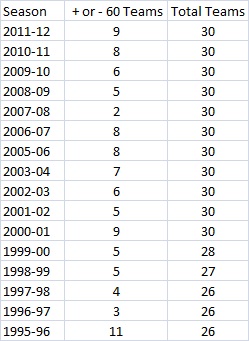 The 2011-12 season still offers a very impressive showing, but there are two earlier seasons that have nine or more teams with an extreme goal differential. Both of those seasons came during the NHL's expansion period when you would expect there to be much less parity in the league whether there was a salary range or not, so you might nick them a bit for that, but 1995-96 really stands out as being a year of extremes. Still, that this season is seeing so many extreme results with thirty well-established clubs is pretty remarkable.

Now that we know that this season is indeed remarkable but not totally unique, what about the Bruins? Are they the most dominant team by goal differential since those record-setting Red Wings? 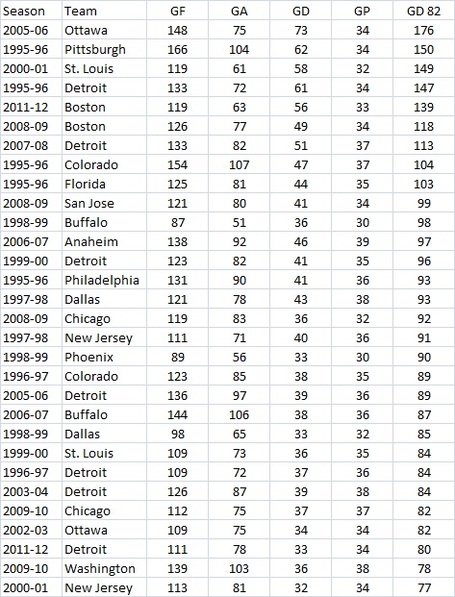 Not quite, but they sure are up there, and actually have two seasons in the top ten. I only listed the top thirty, but last year's Bruins also qualified with a projected goal differential of exactly +60 (although they ended the year at +51). It's been a very impressive run.

But the real story on this chart might just be that 1995-96 season, which has four of the top ten and five of the top fifteen, including the Florida Panthers team that made it to the Stanley Cup Finals. I've remembered that club as being more of a lucky playoff team than actually good, and they did falter in a big way down the stretch (they were -24 over the rest of the regular season), but between the newness of the team, the awesome start, the fun of the rats, and the long playoff run, that might just be the most fun season not to end in a Stanley Cup in a long, long time.

And just for fun, let's look at the most extreme clubs on the other side too: 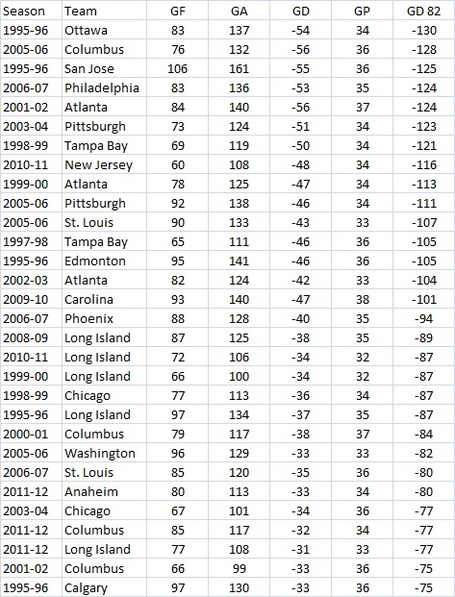 That there is a lot of teams that had no shot at the playoffs at Christmas. The Oilers only appear once here, and it's actually the 1995-96 team - that no post-lockout Oilers' club makes the bottom thirty should tell you something about just how bad these teams are. And if you're looking to feel better about being an Oilers' fan, notice that the Islanders hit the bottom thirty five different times (including this season), and the Blue Jackets are hot on their heels with four appearances (again, including this season) and hit a projection of -60 or worse six times, which is exactly half of the years they've been in the league. Yuck.