The Oilers outshot the Wild 20-3 in the first period. At one point in the second period, the Oilers were up 22-4 in shots on goal. From that point on, score effects kicked in and the game ended 31-31 in shots, but as is often the case when a team like the Wild is buried, they couldn't catch up.

The Oilers won 4-1 running away, and the charge was led by the Horcoff and Hopkins line. Not surprisingly the Wild were unable to match either one. The game seemed close by scoring chances as well (12-10 at evens) but the count was 8-2 Oilers afer Eberle's goal, yet another sign of domination, and the Wild caught up with score effects.

It's rare when the Oilers play a game in which they have to throw away half of the game because of a blowout, though tonight's opponent being the worst team in the league at even strength certainly helps the cause. Edmonton fans shouldn't expect many games like this, most of all because the Oilers have just one more game against Minnesota this season.

As for Wild fans, if I were you I wouldn't read too much into the game or the losing streak, a team as bad as the Wild has about a one in seven chance of losing all six games of any six game segment this season. 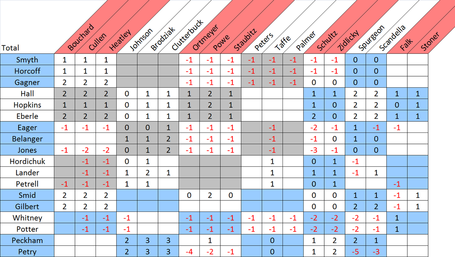 Jordan Eberle's hands are a modern marvel. He's one of those players that never seems to move at top speed, yet always seems to have some ridiculous play at his disposal. So few of those players exist - when they are of North American descent they're called "crafty" or "smart", when they are of European descent they're described as "lazy" and "soft". Eberle has that knack for finding soft spots and exploiting them while at the same time he never seems to move at full speed. Similar players that come to mind are Brett Hull and Alexei Kovalev.

Tom Gilbert is performing at that same level we've come to recognize him for, except this season he's not being asked to carry Theo Peckham against the toughs. Gilbert is at Norris levels with just a competent partner. I can't imagine what he'd be able to do with a good partner.

Jeff Petry possesses a skill that so few defensemen coming into the league have -- the ability to keep his shot low and out of traffic. I know he'll go out and get one or two blocked by the high forward next game just because I mentioned it, but keep tabs of him in the next few games. He doesn't have a fast release, but he makes up for it by getting the puck on net and keeping it below knee level.

Someone named Warren Peters caught Jordan Eberle on the end boards in the second period with a hard, but clean hit. Immediately, the useless entities that are Ben Eager and Darcy Hordichuk started screaming from the bench. Neither did anything useful for the rest of the game by way of plays on the ice or protective plays involving Eberle. In spite of this and many other examples, the Edmonton media continues to espouse the notion that they serve to protect the young Oilers from harm through intimidation and retribution. Think about that for a moment. Taylor Hall took a clean hit so hard that he separated his shoulder. Jordan Eberle took a clean hit tonight WITH BOTH GOONS IN THE LINEUP. Not only weren't the Wild quaking in their boots at the thought of two crappy players raining fists down on them, they weren't even asked to "pay for their sins." The notion that the Oilers need a goon in their lineup is a joke. A very costly joke because that fourth line is being outshot 2:1. How close would the Oilers be to playoff contention if they had a useful fourth line?

The Wild continued their awful even strength play tonight, catching up on the shot clock only after they were down 4-0. The fans, of course, believe in the power of their coach (Yeo is the Sacco of this season), but in reality, this team isn't a good EV team and they haven't been a good EV team for four seasons.

The linesmen got in the way of two dump ins tonight, one for each side. While it "equals out" in the end, they've got to be better situated as the rush is coming at them. If they've got a man on their side, they need to get out of the way and let the far man call the offside play, if there is one. Fans can appreciate the attention to detail, but if it costs either team a goal, it's not worth it.