When I last checked in on the Blue Jackets, I posited that Columbus is a decent market, but the development of the market and the health of the franchise has been destroyed by bad teams:

Obviously Doug MacLean had a significant impact on this franchise. He wasted seven top ten picks in a row and couldn't make the playoffs. He significantly hindered the development curve on a number of prospects and his performance drove attendance south. It's baffling that he's currently employed as a hockey expert for a major media organization.

MacLean's impact was so long-lasting that the Jackets failed to draw fans even when he was long gone.

Overall entertainment dollars aren't as plentiful in Columbus, and those dollars certainly aren't going to chase terrible teams, and over the last ten years, the Blue Jackets can't be considered anything else. They've made the playoffs one time in ten years, tied for last in the league with the Thrashers and the Panthers, two of the other franchises suffering at the gate.

I thought Scott Howson could turn things around, but the Blue Jackets are losing again and it's showing up in the attendance numbers.

I've updated the chart from last year's story with the final data for 2010-11 and the current capacity percentage versus the Jackets' points pace for the season. 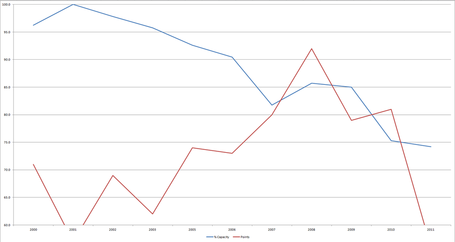 After the team's second season, the only upward blip in attendance came during the Jackets' run to the playoffs. Barring a stunning turn of events, the Jackets aren't going to make the playoffs, which means yet another downtick in attendance. Below is a look at the results from the first ten years of each expansion team from 1972 to present, excluding the WHA expansion teams. The list is sorted by playoff appearances, then win percentage.