Stop me if you've heard this one before. A rested Edmonton Oilers caught a tired team but were thoroughly dominated. The Sharks played six games in in the previous ten days and were missing noted shutdown man Douglas Murray. Didn't matter though, they had enough energy to take it to Edmonton in a big way.

We knew the Oilers couldn't and wouldn't keep winning like they were in October because the percentages weren't sustainable and the underlying numbers were bad, but I don't think anyone thought the run to the bottom of the conference would be so fast. The Oilers are now 2-8 in their last 10, and they've played like a 2-8 team.

Coming into the game, the Sharks ranked first in the NHL with an average of 34.1 shots per game. The Oilers ranked 29th with an average of 26.2 shots per game. Tonight's game followed the averages as the Oilers gave up 37 shots and took only 25. The Oilers managed only 9 shots in the third period even though they trailed by a goal for 14 minutes. The Chosen Line and usual defensive issues took the spotlight once again making this streak feel like last year's exciting last place hockey.

But hey, at least fans get to watch the Chosen Line do their thing. After some outstanding work by Taylor Hall, Jordan Eberle did his typical dekedragdangle thing to score a jaw-dropping goal. Hall, Eberle and Ryan Nugent-Hopkins combined for 9 of the Oilers 25 shots, meaning the other 15 guys managed to get 16 pucks on the net. That's not going to win hockey games. 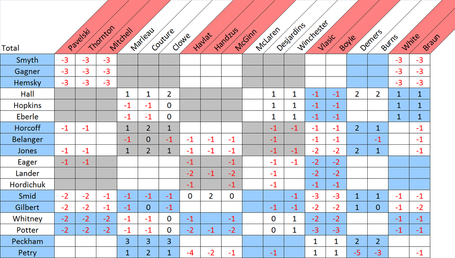 Taylor Hall was the best Oiler on the ice tonight and only Dan Boyle was better overall. Hall was in his bird of prey mode, gliding through the neutral zone and swooping in the offensive end. His hard work made Jordan Eberle's goal possible as he raced to the boards to beat Justin Braun on a 50/50 to get the puck out of the defensive zone. He raced to the neutral zone and won the puck from Braun, pushed it up the wall and beat Andrew Desjardins to the puck and blue line, then slipped the puck to Eberle. He was the only forward to finish in the black in scoring chances and was creative, aggressive and hard-working all night long. He's a treat to watch.

After a tough game with the puck in Phoenix, Jeff Petry righted things tonight. He was much better handling the puck and he was more physical. His steady play contributed to better play from Theo Peckham.

In one of the more striking examples of Theo Peckham's Dr. Jekyll and Mr. Hyde season, he played extremely well for most of the game. Though it's damning with faint praise this was very close to Peckham's best game of the season. Very close because Peckham brought out the Mr. Hyde in the third period when he was called for interference after hitting Joe Thornton approximately one eon after Thornton let go of the puck. The Sharks scored the game-winner on the ensuing power play. It was a stupid penalty and easily avoidable because hitting Thornton couldn't accomplish anything. Peckham's decision-making when it comes to big hit attempts is awful and he's got to be smarter in those situations.

You might remember Darcy Hordichuk's run at Keith Ballard earlier in the season. The end result was Hordichuk putting himself on IR with a torn ego. Tonight Hordichuk one-upped himself. In the first period, Hordichuk took a run at one of the Sharks offensive linemen, I believe it was Desjardins, and went headfirst into the boards after Desjardins ducked out of the way. I'm happy to report the boards were shaken up by the hit and won't take liberties with the Oilers from now on.

The Oilers generated five scoring chances at even strength. Five. Taylor Hall was on the ice for four of them, meaning rest of the team generated ONE scoring chance in the 35 non-Hall minutes. One. The score hides just how bad the Oilers were tonight.

In the first period, Andrew Desjardins got a wide open wrap-around shot off that was saved by Khabibulin. Desjardins was wide open because Ryan Whitney watched him go from one side of the net to the other and step out in front and never moved. Then Whitney gave us this gem in the second:

If you're struggling to locate Whitney, find Joe Pavelski, #8 in blue, and you'll find Whitney. If you can figure out what he's doing, you get a gold star for the day.