Oilers Sleepwalk Through Another One, Fall 4-2 To Phoenix

Share All sharing options for: Oilers Sleepwalk Through Another One, Fall 4-2 To Phoenix

I think I've figured it out - the Oilers need to raid a local Rexall prior to every game. Clean the store out of their entire inventory of ammonia ampoules and store them in the locker room. After the warm-up and before the game starts, each player should walk to the stash, grab three or four ampoules, crack them and take a deep breath. If that doesn't wake this team up, I'm not sure what will. The Oilers have been pathetic at even strength through two straight games and it's getting old. We knew they Oilers weren't as good as their start, but they could at least try to be better than last year.

The entire game is encapsulated in the highlights. Two goals from Taylor Hall, a couple of ridiculous saves by Dubnyk and domination by the Coyotes. Outshot 42-20. Putrid. If I didn't know any better, I'd swear this is the 2010-2011 version of the Edmonton Oilers. Any more stinkers like this and catching Anaheim and Long Island for last isn't out of the question. And look at the next two: at San Jose, then home against Detroit. Trouble ahead, trouble behind. 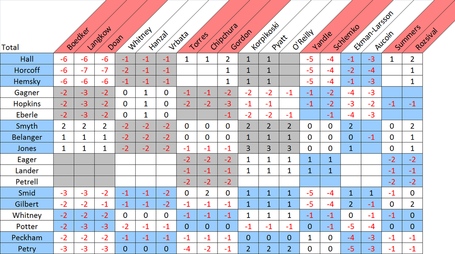 There wasn't much about this game that was good. Taylor Hall came back and got a pair on the power play, but his line was dominated at even strength. It was great to see Corey Potter back on the ice, but he was paired with Ryan Whitney and they were thoroughly dominated.

Tom Gilbert and Ladislav Smid were outstanding throughout the game, though it's to be expected when they don't hard match. See Ugly, The.

Luck, as in Ryan Nugent-Hopkins puck luck tonight. He was excellent on the forecheck and made two steals, but both times saw the puck skip away from him immediately. He came in alone on a rush in the third and just barely missed the rebound. He broke on a puck in the defensive zone in the second period and tipped it, but it was just an inch out of his reach. If he grabs it, he's in alone on Smith. Damned luck.

Jeff Petry coughed up the puck early, but leveled off in the second. In doing so, however, he also put a halt to any sort of physical play.

Devan Dubnyk was valiant for most of the night, but the fourth goal is unacceptable. It's the sort of goal that Nikolai Khabibulin gave up last season.

The crowd in Phoenix was just brutal tonight. I didn't see the announced attendance, but the actual couldn't have exceeded 6,000.

Theo Peckham had his worst game of the year tonight. This is bad news for for a kid who can't seem to get it together and has struggled badly all year long. He couldn't handle the puck on the first goal against. His Staiosian stroll up the boards, leaving Corey Potter alone in front on the Coyotes third goal, was the stuff of AHL legend. At this point, I struggle to find a reason to keep him on the roster.

For some unknown reason, Tom Renney is obsessed with putting his fourth line on the ice in the third period. It's one of the worst strategies known to man, and yet he keeps going with it. After Taylor Hall tied the game in the third, Renney threw the fourth line out there. They spent the entire shift in their own zone.

For some unknown reason, Tom Renney went back to Rawhide line changes tonight. After one period, Ben Eager was within 90 seconds of every other forward in ice time. Let that sink in for a minute.