But look around
Hear go the sound of the wreckin' ball
Boom and Pound
When I shut 'em down
--Chuck D, "Shut 'Em Down"

Tom Gilbert does not like it when I laud the other team prior to a game. After lauding the Winnik - O'Reilly - Landeskog (A.K.A. the "Pigs on the Puck Line") line as the best young line in the NHL, Gilbert went out and wrecked 2/3 of that line and the Avalanche were unable to counter with any other line. Gilbert played nearly 17 minutes at even strength last night, ~10 minutes coming against Landeskog - O'Reilly - Hejduk. Not only did he keep them off of the score sheet, when he was on the ice, the Oilers dominated the Pigs on the Puck at their own game - possession. He was physical, so the rabble-rabble crowd should be happy, he was smart with the puck, so Jonathan Willis should be happy. Gilbert's performance was a masterpiece.

But this game won't be about Tom Gilbert. The highlight reels and press accounts are going to talk about Sam Gagner's breakout game. Gagner ended the night with two goals and an assist and 3 shots on goal. The Gagner - Hopkins - Eberle line was okay at even strength, but outstanding on the power play. Gagner's first goal came on the power play as Gagner walked in front of the net and got a lucky bounce to get the puck home. When he's on the power play Gagner is one of the few Oilers who will (or possibly can) walk out to the front of the net from the goal line or below the goal line. As he's matured, he attempts that move more often and often creates rebound chances off of the move. His willingness to try that move is one of the reasons he's invaluable on the power play, especially on a unit without a player willing to attack the crease.

Gagner's second goal was one for his critics. During his goalless streak he was criticized for possessing a sub-par shot and critics pointed to his shot as the primary reason for his lack of goal-scoring, even though Gagner was a career 9.8% shooter prior to this year. As the second period drew to a close, Eberle engaged in a battle along with wall with the pinching Jan Hejda and popped the puck loose. Hopkins chipped the puck through Matt Duchene and was off down the right wing on a 2-on-1 with Gagner. As he crossed the blue line, the helplessly stranded Ryan O'Byrne went down to the ice to block...the pass or the shot, it's difficult to discern which... and Hopkins put a pass on the tape for Gagner who one-timed it home for the goal behind Semyon Varlamov.

Gagner now has 12 points in 22 games, including 10 points in his last 9 games. He's taken 19 shots in those 9 games. In those 9 games, he's played both wings and center. He's 52% in the faceoff circle in a limited role. He's playing at a very high level right now and can fit on the top line against the toughs and on this second line against the easier minutes. He's become the player everyone envisioned when he was drafted four years ago. 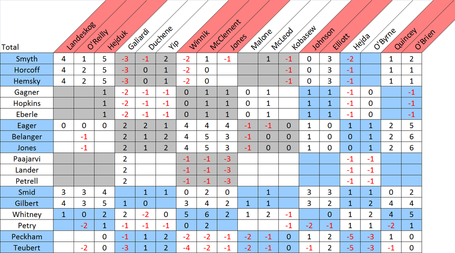 The aforementioned Gilbert was amazing. Bruce McCurdy noted that Gilbert took 11 defensive zone faceoffs to only 4 offensive zone draws while matched against O'Reilly. Despite that, Gilbert was +8 in scoring chances (10 CF / 2 CA) and was +4, +3, +5 against Landeskog - O'Reilly - Hejduk, respectively. He led the team in time on ice once again, racking up 2:54 on the power play and 3:41 on the penalty kill. He was outstanding.

Sam Gagner's play has been stellar since the his fifth game back from injury. Last night was just a continuation of that high level of play with a lucky bounce to get his first goal. A significant benefit of playing with Ryan Nugent-Hopkins is easier minutes and easier zonestarts and gobs of power play time. Gagner took advantage of both in his two goal night. He was 4-6 in the faceoff circle to boot.

I know it's just a matter of time until this level of play by Nikolai Khabibulin is a dust devil in the rear-view mirror and I see the bad things (rebounds and over-committing) creeping back into his game, but when he's on, he's on. And he was tremendous against Colorado last night in one of his best performances of the season. He struggled with rebounds in the second period, but held it together into the third. I don't know how long it will continue, but it's a great feeling to root for a goaltender who can stop the puck.

In some instances, things like forward lines are better than the sum of their parts. That was certainly the case last night with the newly-formed third line of Eager-Belanger-Jones. Half of their time at even strength came against the Avs' third line and the Belanger line thumped them. Ben Eager's goal came against that third line and third pairing and overall, the third line came out way ahead in scoring chances. Belanger was 7-13 on the faceoff dot and the entire line had -3 in offensive zonestarts. Aside from the numbers, these three looked the part of a line that had been together for a full season. They actually pulled off a couple of cycles and held the puck down low for an extended time, something that all three of them have struggled to do this season when apart.

What else would be in this category but Ryan Whitney's mobility issues? I won't call out anyone for not asking about this because I don't want to offend anyone close enough to ask. He's still struggling to move and only those close to the situation know why, but they aren't telling. Tyler Dellow has taken to calling Whitney by the "Barbaro" moniker and Colby Cosh wants to know if the defenseman even has feet. I supposed we'll find out about this after Whitney leaves town and certain types close to the situation snipe at him on Twitter.

Colten Teubert pulled off the now-patented terrible Oilers line change in the second period, stranding Theo Peckham without a partner and Ladislav Smid 90 feet away from the play. The h2h chart has been modified to take the three Avs' scoring chances created by this change away from Smid. I've placed those chances back on Teubert.

Ryan O'Reilly and Gabriel Landeskog let me down hours after I sung their praises. They both should feel shame.

Magnus Paajarvi played just :56 in the first period. He played 3:15 in the second period. He did play 5:56 in the third period, but 4:16 of that came with less than 10 minutes to go and the Oilers sitting on a 4-1 lead. If Paajarvi is struggling with the NHL game, it makes sense to scratch him or send him to the third line. But he's not struggling, he's struggling to score, which are two completely different matters. One is a matter of talent, the other a matter of luck. Tom Renney needs to get Paajarvi back into the lineup, find him some power play time and quit treating him like a leper because he's not getting bounces.