Share All sharing options for: Oil Observations From Week 4

I don’t know if there’s a more polarizing player amongst Oiler fans than Ryan Jones. His 18 goals last year garnered him a lot of fans. His poor underlying numbers (scoring chances, corsi, offensive percentages) netted him a lot of detractors, especially here at the Copper & Blue.

Not only were his numbers polarizing, what people were seeing was completely different between his supporters and detractors. His supporters saw a speedy grinder who went to the hard areas of the ice to score his goals. His detractors saw a player who was constantly picking himself off the ice and getting lost defensively. It’s no wonder that Jones has been the subject of many discussions since he signed his 2 year, $1.5 mil cap hit contract.

There has been one area where nearly everyone can agree Jones has excelled since joining the Oilers, and that’s on the penalty kill. He survived the butchering most of the penalty killers endured during the much maligned diamond PK phase and has proven to be an indispensable part of the PK group. It was always a mystery as to why his PK abilities failed to translate to even strength.

One of the complaints I had personally about Jones is how often he cheated for offense. Last year he had a habit of leaving the zone early and hanging out at the opposition blueline waiting for the puck.

When Hemsky got hurt and Jones had to take a spot on the 1st line with Smyth and Horcoff, it gave Jones a chance to play a much more challenging role than he’s had in the past. Tom Renney matched this forward group very hard against the opposition’s best players as well as relying on them heavily to start the play in their own zone.

Ryan Jones was definitely up for the task. His goal scoring suffered (1 ES goal on the season so far), but his ability to change his game was an important reason why the first line was able to have the success that they had in the role they played. Instead of being behind the play defensively and leaving the zone early, Jones has been a dedicated back checker and has often been the 3rd forward to leave the zone on a breakout.

The following happened early in the game versus the Phoenix Coyotes (right off the opening face-off to be precise). Jones initially stays near the opposition’s blueline but notices the Oilers are struggling to clear the puck. Jones comes all the way back down and helps clear the puck and gets a good scoring chance out of it(even if Dennis doesn't think so). 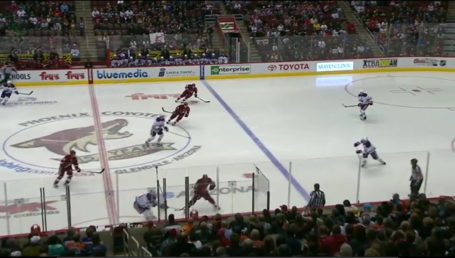 You can see Jones high near the Coyotes blueline, the puck is going back into the Oilers end and Jones starts to circle back. 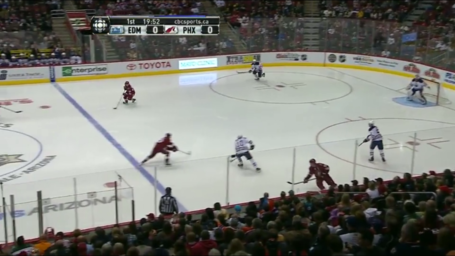 Horcoff has the puck in the middle of the ice and Jones continues to head back to the Oilers blueline. 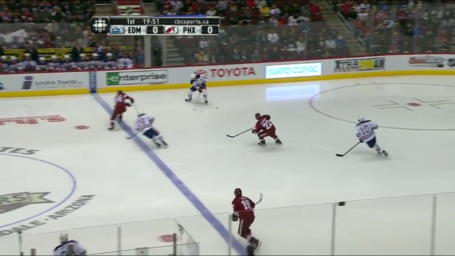 Jones picks up the forechecker and follows him to where he can provide puck support on the clear. 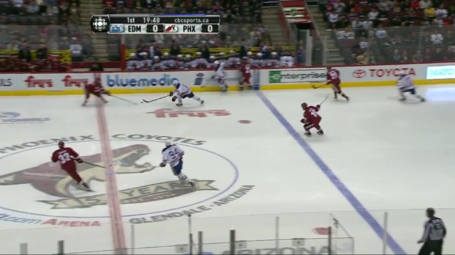 Jones takes out the winger, allowing Horcoff to come pick up the puck uncontested. Jones immediately jumps back into the play and the Oilers get a 2 on 1 out of the sequence.

Ryan Jones has a nose for the net and good speed. He’s also got very good positional awareness on the penalty kill. He’s done a remarkably better job this season at becoming a player who can play all over the ice. He’s showing that the awareness he shows on the PK (reading lanes, puck support) can translate to his ES play. It’s been a very impressive turnaround and it gives the Oilers a heck of an option in terms of how to run their lines if he can continue that play alongside Eric Belanger.