Thoughts from the Battle of AHLberta

Share All sharing options for: Thoughts from the Battle of AHLberta

With the Oklahoma City Barons in Abbotsford this weekend, I decided to mosey on out to catch the game on Saturday. As it turns out, I wasn't the only one with that idea! There were a lot of fans out wearing Copper and Blue, and Kevin Lowe was taking in the game from one of the skyboxes (must be making doubly sure that they're okay trading Omark for a fourth rounder). I'll talk players, coaching strategy, and a few other notes after the jump.

I'll start with the lineups. These were the lines for the Barons to start the game:

You might have noticed that Mark Arcobello and Teemu Hartikainen aren't in this lineup. Apparently Todd Nelson decided to give them each a healthy scratch, which speaks both to the number of forwards that the Barons are carrying and to what Nelson thought of how those two played on Thursday. I was disappointed that I didn't get to see Hartikainen play, but that is some kind of message from his coach.

The first period saw the Heat take eleven minutes in penalties, so it was pretty difficult to pick up any coaching strategy or get much insight into the players themselves. It also featured three goals in the first five minutes including David LeNeveu giving us our "minor league moment" when he raced out toward the blueline to get a puck while the Barons were on the power play only to lose that race to the forechecker who promptly poked it past LeNeveu and walked it into the net. Anyroad, it did give a good look at the PP units, and this is what the Barons were using:

Interesting to see where guys were playing, and it's easier to see why Cornet's shooting percentage is much higher this year - he scored in this game about two feet from the crease, and spent most of his time on the power play standing right there. By the end of the first, the score was tied at two, and after the second the score was tied at three. In the second, Josh Green gave us our second "minor league moment" when he got a puck in front of the net and scored the Barons' third goal on a spin-o-rama backhand to keep up his point-per game pace. That's right. Josh Green. I also had a chance to look at the Barons' penalty kill:

Not surprising to see VandeVelde and House getting minutes together on the PK. Both guys have a reputation for being good on the dot, and at least tonight, they were playing together at even strength anyway. The other two forwards who got some PK time (when O'Marra had a penalty and when Green was gone in the third) were Tremblay and Cornet.

The third was played almost exclusively at even strength, which was excellent because it gave me a chance to see how Todd Nelson would run his bench on the road in a tie game. It was obvious from the first shift that the lines had changed for this period, and that was apparently because Josh Green suffered an injury, but I didn't notice it when it happened. As a result, Nelson decided to run with nine forwards for the entire period. Antti Tyrvainen and Curtis Hamilton (who got just one shift that I noticed, but it may have been two) were the two extra guys sitting. That made the regular lines:

And here's how Nelson ran the forwards:

A pretty even cadence through the entire period. There was one point where the wingers briefly changed centermen, but that was because Omark overstayed a shift, and so took a break on his next one. I've highlighted the only shift where the coach did something besides roll them over the boards, and that was an extra shift for VandeVelde on a defensive zone draw. That matches the overall even strength zone starts for the game quite well (though one caveat here: I was making these notes live, so while I'm quite confident that these are right, there may be the odd error): 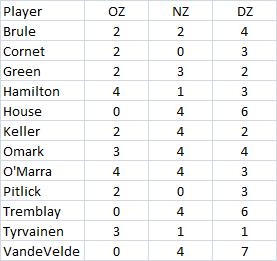 These numbers include icings, so some of these draws aren't new shifts, so a bunch of this uneven distribution comes from that, and there's no doubt a large dollop of luck given how Nelson was generally just rolling guys over the boards. Still, between this, his play on the PK, and his reputation in general, I get the impression that VandeVelde is used as a defensive specialist.

As for the defenders, here's how the team ran in the third period, along with the zone starts:

Once again, icings are having a pretty big impact here. I really should have been counting them separately, but I know for sure that at least three of the DZ starts that Lowery and Helmer got were because they were stuck out on icings, and I suspect that it was actually more. That said, the only time coach Nelson broke his cadence in the third period was to give Montgomery and Plante an extra draw in the offensive zone, which is interesting both because of that and because all six defenders were used right to the end of the game.

I'll finish off with some observations on individual players:

Pitlick - He surpassed my expectations the most of any player in the game. He was able to keep up with the speed and physicality very well. There were a couple of instance when he tried to make a skill play when something more conservative would have worked better, especially in the defensive zone (one example: in the defensive zone, he tried to steal a puck by kicking it up to himself, but missed and lost position on his mark). On the other hand, he seemed very conscious of not getting caught in the offensive zone, which was great to see. I doubt he makes it to Edmonton this season, but this was a very encouraging viewing.

Hamilton - I was less encouraged by his play than I was by Pitlick's. Hamilton seemed to struggle quite a bit more with the size and especially the speed of the AHL. He was not at all afraid to engage physically, which is good, but just wasn't strong enough to take or protect the puck. That said, he took a huge hit from behind into the boards early in the second period, so that may have had an impact on his play (O'Marra came to his defense, and took an extra roughing penalty in addition to the fighting major; interesting that the AHL doesn't seem to have the instigator penalty, but still seem to enforce it anyway).

Omark - He tried to create a lot on his own. There was one shift where he skated back and forth with the puck below the goal-line, using his arm to ward off defenders. He almost had his head taken off in the middle of it, but managed to make the guy miss, which only made it more entertaining. Of course, he ended up losing the puck, and the Heat went back the other way, so it was pretty ineffectual, but it sure was fun! He also overhandled once int he defensive zone, which led to an excellent chance against when he was stripped of the puck, and he took the longest shifts of any of the forwards. He ran the first power play unit, and drew a penalty in overtime, which the Barons later scored on to win the game. Really fun player to watch at this level, but still has his share of mistakes.

Plante - He made one horrible giveaway when he was carrying the puck behind his own net only to get it poked away and into the slot, but I was generally pleased with his play. Even at the AHL level, he looks slow, but that's often because he's using the time available to him to make decisions. He won't have that much time in the NHL, but here he does, and he made mostly good decisions. He moved the puck up effectively, followed the play well, and almost never looked like he was chasing the play. He and Montgomery worked well together because they both felt comfortable with the other guy's ability to move the puck to the forwards.