The Oilers on the Power Play

Share All sharing options for: The Oilers on the Power Play

In yesterday's gamed-day thread, I mentioned that the Oilers have been having some problems on the power play. It's a point I wanted to dwell on just a little bit. Here's what I said yesterday (with the numbers updated to include last night's results):

With Taylor Hall on the ice, the Oilers are generating just 33.3 shots per sixty minutes of five-on-four ice time; with Ryan Nugent-Hopkins, it's 39.0; and with Jordan Eberle, 39.2. Linus Omark stands at 62.5, but Omark hasn't had any luck with the percentages on the power play either: his on-ice shooting percentage is a very clean 0.0%. That compares to 21.4% for Hall, 20.0% for Nugent-Hopkins, and 20.0% for Eberle, all of which would have led the league last season.

In other words, Edmonton's problems in this area are being obscured by some very strong early-season percentages. After the jump, I'll give those shot rates a bit more in the way of historical context.

The following chart gives the on-ice shot rate for the Oilers with each significant power play performer, the Oilers' rate as a team so far this season, the average team's shot rate in 2009-10 and 2010-11, and the shot rate for the best and worst team in the NHL in each of those season (it happens to be the Oilers and San Jose Sharks in both cases): 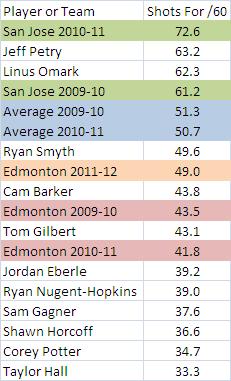 You can see just how bad the Oilers' first unit has been by this measure. Given the amount of talent out there, I fully expect them to get better, but they'll need to improve a lot just to get up to league average. That's worrying to me because we know that a team's ability to generate shots is a good indicator of future power play success.

That brings me to Linus Omark. So far this season, the Oilers have an exceptional number with him on the ice. Last season, it was much worse, but still good enough to lead the team's power play regulars. In that the play runs through him frequently when he's on the ice, it seems to me that this player has some very real talent in this area, and that, in the long term, it's a talent that could help the Oilers immensely.