For a bit of a change of pace, instead of looking at what happened in over the past week in Oiler games I’m going to switch focus and talk about the forecheck in general.

The primary goal of the forecheck isn’t to necessarily force a turnover, but rather disrupt the opposition’s breakout. Aside from various formation types (1-2-2, 2-1-2, 1-3-1, etc...), the other main aspect of the forecheck are your pressure points. Simply put, these refer to the areas of the ice where you want to apply pressure on the puck carrier.

As a matter of preference, I typically prefer the 1-2-2. It’s an easy concept to grasp for most hockey players ( even down as young as 10 years old), and it allows you to have (in my opinion) a lot more variety in terms of where you want your pressure points to be. For instance, you can press further down into the zone or you can back right off to the neutral zone. It all depends on your game situation.

The basic premise behind the 1-2-2 is that you are trying to apply pressure with your first forward and cut off outlets outside the zone with the 2 high forwards. This forecheck can be ran from either side, but for these purposes we’ll apply them all from the LW side (simply reverse for the RW). 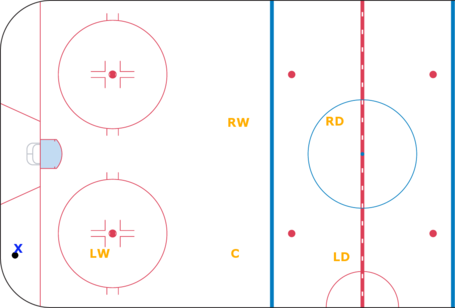 The basic setup has the LW chasing low for the puck, the centre providing backup behind him on that wall and the RW covering both the middle and the right side. It’s important for the RW to remain in the middle because if he’s out too wide, it’s an easy outlet through the middle. He has ample time to move the RW boards if the situation calls for it.

If the puck carrier tries to go up the LW side, he’s generally going to try a chip past the first forechecker and to one of his teammates. In that instance, the C is going to press right away and the LD is going to try and hold the line. The RW is going to remain high and in the middle, but he wants to be closer to the LW boards. 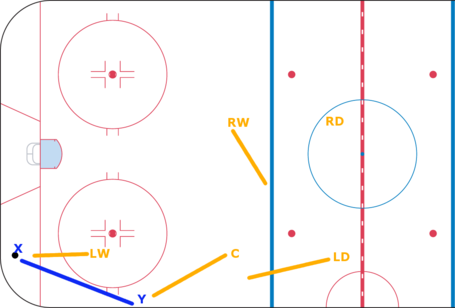 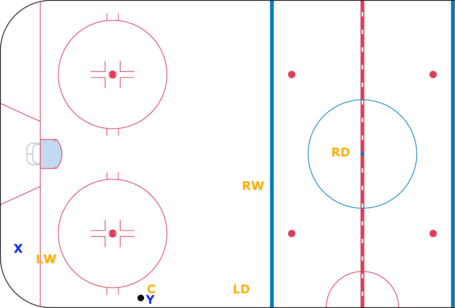 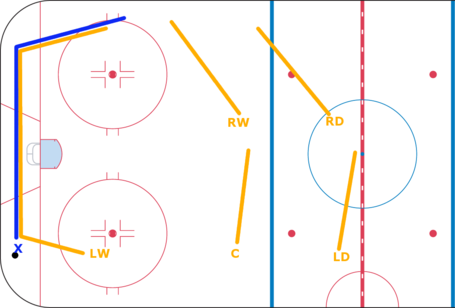 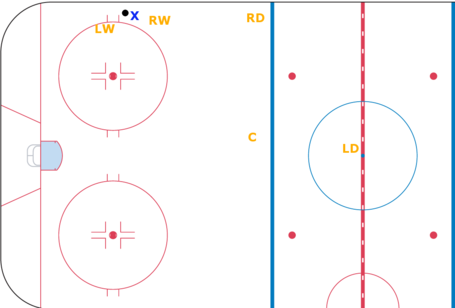 If the puck carrier decides to pass the puck, it’s going to move to the open area a lot quicker so this forecheck sees a slight adjustment. Instead of the LW chasing, he heads back up high and to the middle of the ice while the C and RW rotate. 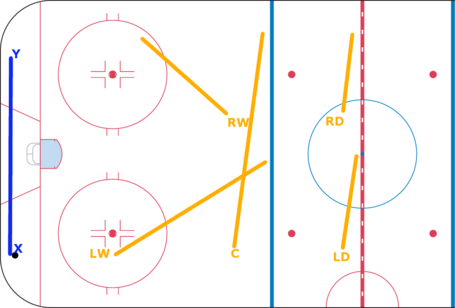 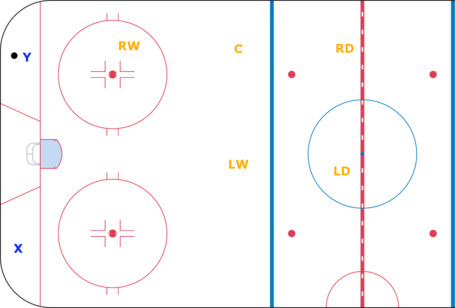 If you notice, all of these result in the same thing. There’s a triangle of your players near the top of the zone on the same side as the puck. This provides extra pressure and puck support and allows you to potentially out man the opposition. The drawback is that you are susceptible to passes that go back across as you are rotating. For instance, in the final example we’ll add another forward who is on the half wall. As the puck goes behind the net to the other player, he’s going to cut back immediately into the open area for the pass. The initial passer will also jump into the play as an outlet on the right side. 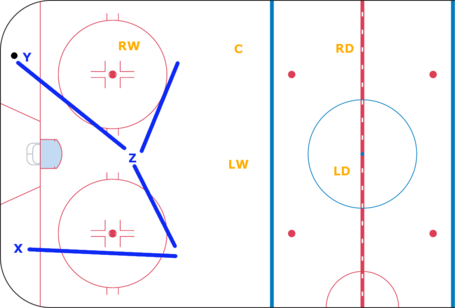 The good thing is, you have enough players high that you can recover from this and not sacrifice anything defensively. So while it’s beatable, it’s a both an effective pressure forecheck, as well as a relatively safe one.