Share All sharing options for: Oilers Beat Kings 3-0 To Extend Winning Streak To Six Games For The First Time In Eight Years

March 26th, 2002. The Edmonton Oilers just put the finishing touches on a 3-1 win against the Columbus Blue Jackets. Anson Carter, Dan Cleary and Mike Comrie lit the lamp and Jason Smith and Ryan Smyth had two assists each. Jussi Markkanen was in goal for the win, stopping 27 of 28 shots.

I mention this game because it was the final game of a six-game winning streak, the last time the Oilers won six in a row. Beginning on March 14th against the Senators, the Oilers ran off wins against the Capitals, Sharks, Flames, and Canucks before beating the Jackets at home. The Oilers outscored their opponents 18-5 during that stretch, with Tommy Salo winning five straight before giving way to Markkanen who won the sixth. Both Anson Carter and Mike Comrie had 4 goals during the six game streak.

Fast forward eight years to November 3rd, 2011. The Edmonton Oilers defeat the Los Angeles Kings to extend their winning streak to six games. Beginning on October 22nd against the Rangers, the Oilers ran off wins against the Canucks, Capitals, Avalanche and Blues before beating the Kings on the road for the sixth win. The Oilers outscored their opponents 17-6 during that stretch with Nikolai Khabibulin winning five of six games and Devan Dubnyk pitching in with a 40 save performance in a 3-1 win against Colorado. Ryan Smyth scored 4 goals during the six-game streak.

Eight years between six-game winning streaks and Ryan Smyth and Shawn Horcoff were part of both, and a major part of both the current streak and the win against the Kings. 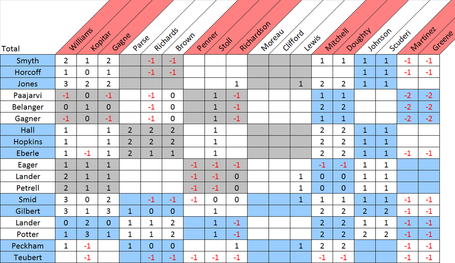 Tom Renney chose to pair Corey Potter with Jeff Petry tonight and though it doesn't seem like a pairing that would work well together, they were outstanding tonight.  Petry played center field for Potter, hanging back in both zones, allowing Potter to do his thing.  They played over 11 minutes against the Kopitar-Gagne-Williams and Richards-Brown combinations and beat them.  Potter's surreal start to the season continues and Petry, though cast in a new role, played exemplary hockey.  He doesn't have to clear waivers, but I don't see how the Oilers, in good conscience, can send Petry back to Oklahoma City.

Renney's old reliable pairing of Tom Gilbert and Ladislav Smid were incredible tonight.  Gilbert was all over the ice, in both zones, lugging the puck out of the zone and up the ice, blocking shots, killing penalties and he played 25:26, 4 minutes more than any other Oiler.  Smid played the game in a giant triangle in his own zone, from corner to corner and out to the slot.  He hit, bumped or leaned on anything that came through the triangle and blocked nearly every puck shot through the triangle.  The two played nearly 18 minutes at even strength and ~14 of that was against either Anze Kopitar or Mike Richards and they shut the two down, with Tom Gilbert's play on Anze Kopitar's breakaway in the third period acting as a microcosm of their night.  Gilbert's pursuit and angle was textbook, and he forced Kopitar into a weak backhand attempt.

Shawn Horcoff and Ryan Smyth played 13 minutes at even strength, just over 8 of it against Anze Kopitar.  The two did a magnificent job defensively, combining with Gilbert and Smid to shut the Kopitar line down and shut them out on the power play.  Smyth even scored one of his patented garbage goals from behind the goal line off of the stick of Alec Martinez.

Tom Renney was once again a line-matching madman.  The Hall-Hopkins-Eberle line took 8 faceoffs, NONE in the defensive zone once again.  The Horcoff line was hard-matched against the Kopitar line.  The top two pairings did all of the heavy lifting against the Kings top lines.  And Renney was able to do this on the road.

A special tap of the stick for Lennart Petrell.  Petrell, a 27-year old rookie from Finland was a longshot to make the team and most thought he would provide veteran leadership in Oklahoma City this season.  Instead, Petrell has become a mainstay on the Oilers penalty kill, and the primary reason the Oilers are winning games right now.  Tonight, Petrell scored his first NHL goal.  SUOMI!

There wasn't much bad tonight, except for Theo Peckham.  He seemed lost once again, struggling with the puck before turning it over to Ethan Moreau for what should have been a scoring chance if Moreau wasn't so bad and then later choked on the puck while standing in front of the net with a clear opportunity to get the puck out of the zone.  He was saved by Ryan Smyth's heads up defensive play.  If Peckham is trying to play through an injury, management needs to bite the bullet and send him to the IR.  If he's not, he needs some time away from the ice.  It's a tough pill for management to swallow, but if minutes and roster spots are doled out based on performance, Theo Peckham doesn't deserve a spot on the Oilers NHL club right now.

Those of you who read my scoring chance work on the Kings - Sharks series last year are well aware of my views on Jack Johnson, and Johnson's awful play was on display tonight.  Scan down through the "Johnson" column in the head-to-head chances chart: he lost the battle to nearly everyone in an Oilers' sweater.  It's not entirely his fault - the Kings are playing him in a top 4 role when, even on his best night, he's a bottom-pairing guy.  The Kings have him locked up for six more years at 4.36 million per year, an overpay of only $3.5 million per year.  To quote from my previous article:

So while you're getting ripped apart head to toe [as you fall into a black hole], you will also extrude through the fabric of space and time, like toothpaste squeezed through a tube. To all the words in the English language that describe ways to die (e.g., homicide, suicide, electrocution, suffocation, starvation) we add the term "spaghettification."