This game started like a pre-Bettman contest:  through 7 minutes, the Preds had 2 shots and the Oilers had 1, but the Oilers were up 1-0.  And what a ridiculous shot it was - after wheeling out from behind the net, Jordan Eberle threw a puck off of Ryan Suter's foot, picked up the blocked shot and went top shelf over the gargantuan Anders Lindback.  It was a thing of beauty.  Aside from a couple of rushes and two extended shifts for the Preds in the offensive zone, the rest of the period was Predator-paced - the two teams combined for only 7 more shots over the next 13 minutes.

If the first was boring hockey, the second was a total mess.  In reality, the Oilers were outplayed after Eberle's goal in the first, but the Predators stomped on the Oilers in the second.  Nashville outshot the Oilers 16-7, posted the period's only goal, and if not for brilliant goaltending by Nikolai Khabibulin, it would've been worse.  Edmonton was disorganized and struggled to simply exit the zone.  Officiating, rather, bad officiating marred the second period - Ryan Jones was called for a 5 minute major elbow on a routine hit on Blake Geoffrion along the boards after the puck kicked away, but quickly made up for it with a so-so interference call on Sergei Kostitsyn and an awful tripping call on Roman Josi.

The Preds put even more pressure on in the third and seemingly held the puck in the Oilers' zone for a large portion of the period.  The got their got at 12:21 as Nick Spaling managed to get one behind Khabibulin, it was a goal that was overdue considering the Oilers' level of play throughout this one.  Even after the Oilers gave up the lead, they had no fight in them.  They didn't threaten late in the third and simply allowed the Predators to grind the game away.  The Oilers played their worst home game of the season and allowed the Preds to post their largest shot differential of the season. 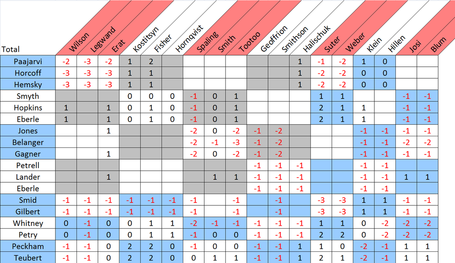 Nikolai Khabibulin was outstanding tonight.  This game might easily have been a blowout if not for Khabibulin's ability to bail his mates out each time the Oilers allowed an odd-man rush into the zone.

Magnus Paajarvi looked like the player we saw through the second half of last season.  For the first time this season Paajarvi was allowed to skate with two good linemates and he responded.  He was creating, causing match-up issues and played very solid defense.  He and Ales Hemsky still around on the same page, but a few games together should help fix that.

Ryan Nugent-Hopkins was 5-7 in the faceoff circle.

Sam Gagner's attempt at a cutesy play just prior to the Predators second goal shouldn't happen at the hand of anyone but a rookie or a sub-replacement player.  I've marveled at the way Gagner has been coming on, and he was on again tonight,but that drop pass to the middle of the ice in his own end was terrible.  It was reminiscent of his rookie season when he made blind drops at both bluelines and in his own zone, driving me to the brink of insanity.  As good as he's been over the last week, that just can't happen.

Half-way through the second period, Ladislav Smid went down to a knee to block a shot as Martin Erat rushed into the zone.  The problem?  Erat wasn't ready to shoot and simply skated around Smid who lunged back to try to stop the rush and ended up sprawled awkwardly on the ice.  dawgbone wrote about the problems the Oilers are creating when they're too eager to block shots and it seems Smid is doing it once a game now.

The officiating in the second period should be reviewed by the league office and used in an instructional video, much the same as Brendan Shanahan does with his Shanahammer videos.  Hits like the one thrown by Ryan Jones cannot be whistled and the makeup officiating the Oilers received shortly after the original call shouldn't happen either.  If either ref is unsure of what's going on anywhere on the ice, or didn't see something clearly, they must confer with their on-ice partner to determine the correct call.

Something is very wrong with Ryan Whitney.  I focused on him throughout the game and noticed his movement, or lack thereof.  He's unable to move laterally, he's not accelerating and not engaging anyone physically.  In the zone, he's playing rover in the crease and reaching for the puck and the man, rather than moving his feet to gain position or battle for the puck.  He's either playing his way back into shape, struggling with the after-effects of his injury, or he's still hurt, much more so than anyone is letting on.