Share All sharing options for: Oil Observations From Week 6

Hitting has always found a high place in hockey lore. It's been said that big punishing hits can change the momentum of games, intimidate opponents and even win playoff series. When a team is in a slump, physical play is often cited as the reason why a team is losing and a method for them to turn the ship around. The problem is, sometimes you try and increase your physical play at the expense of playing hockey. Physical play has a role in hockey but it's important to always play to the strengths of your team, no matter what kind of game the other team is playing. The same Edmonton Oilers team that scored 15 goals in 2 games is the same team that was badly out played in a 4-1 loss to Dallas, yet the narrative after seemed to be that the Oilers weren't physical enough in the loss to Dallas. The Oilers were credited with 33 hits in the Dallas loss, which is more hits than the Nashville and Chicago games combined (beware scorers bias).

This Oilers hockey team is not a team that will wear you down with body contact. Their best bet to win every night is to out skate the opposition (which is a combination of actual skating as well as faster puck movement). This team has a lot of players who can make plays at top speed and it's important for them to play at that speed and not get involved in a hitting contest.

This especially holds true for the players on the team that do sort of fit the role of a hitter or a banger. Responding physically is fine, provided the play calls for it. The last thing you want to do is chase a hit around and put yourself out of position.

The Oilers have been very Jekyll and Hyde lately. They were excellent against Chicago, very bad against Dallas and had a fantastic start against Nashville before cruising to the win. Even going back a little bit further, they got off to a very good start against Ottawa before giving up the first goal and then never being able to get back on track.

In the 2 wins, the Oilers played disciplined team defense. Forwards funneled the opposition wide for the defensemen who played sound positionally and didn’t chase. In the two losses, Oiler defensemen went after big hits in bad areas of the ice, particularly when pinching in.

Generally speaking, as a defenseman you don't want to be skating forward to make a hit without having proper coverage behind you. Typically this means there is a forward skating back at the same time you are going forwards. 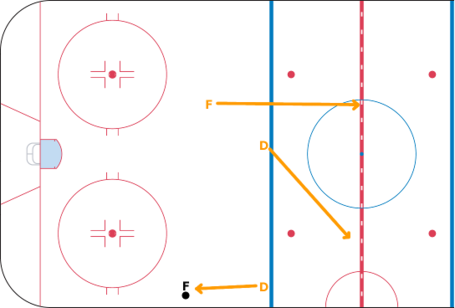 As the defenseman pinches, the alternate defenseman slides over and the far side forward begins heading back. The reason for this shift is because if the puck gets passed the pinching defenseman, the second one is there to pick up the puck carrier which allows the covering forward to play a coverage role instead of worrying about a man on man defensive assignment.

The Oilers spent the first several minutes of the game vs Ottawa controlling the play and keeping the puck in the Senators end. Sometimes what happens in these situations is you begin to feel invincible or you start to panic because you've had so many good chances without scoring and you start taking unnecessary risks. The Senators were able to take advantage of an ill-advised Peckham pinch to score the opening goal of the game.

It was an unnecessary risk at this stage in the game and the Oilers found themselves down a goal in a game they were dominating up to that point.

One of the things to look out for as a defenseman is how many players the other team has behind your forwards. If they have 3 players past your last forward there's a chance for a 3 on 2 if the puck gets chipped past your forward group. There's almost never a good reason to pinch in this situation because even if you cancel out one of the forwards it still leaves a 2 on 1. 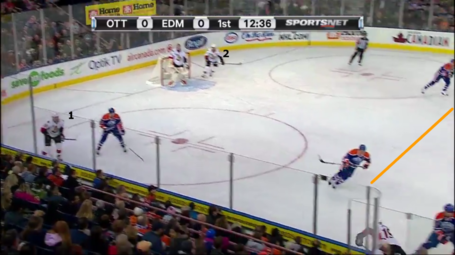 The Senators have 2 players deep, leaving 3 players behind the Oilers forward group. Ideally in this situation one of your forwards starts to head back a little bit earlier, but as a defenseman you have to recognize that you are already going to be giving up a 3 on 2 if the puck gets past your forwards. Theo Peckham doesn't read this and tries to pinch down on Jason Spezza. 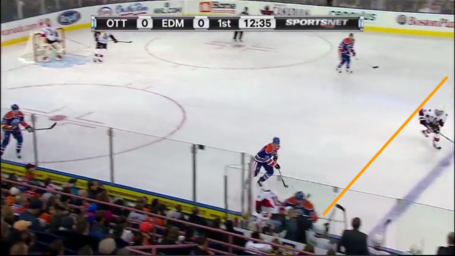 The puck gets by Peckham and the Oilers now have 4 players below the puck and 2 Senators behind them. It resulted in a 2 on 1 and a goal for the Senators.

The following play occurred vs Chicago. Tom Gilbert recognizes that the Oilers aren't outnumbered past their forwards. Both Jordan Eberle and Ladislav Smid recognize Gilbert's pinch and slide over accordingly. This ends up allowing the Oilers to both double team the puck as well as have double coverage on the high Chicago forward. 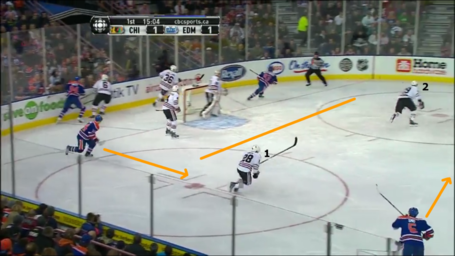 The Blackhawks have 2 forwards past the Oilers highest forward, with one of them skating to meet the puck at the side. Eberle is heading back which allows Gilbert to make a play on the puck as the Oilers aren't in danger of giving up an odd man situation. 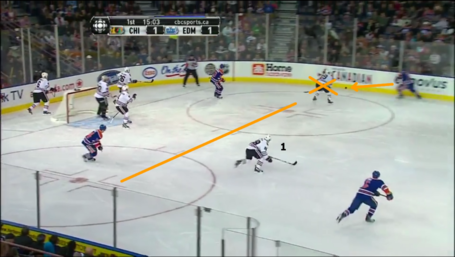 Gilbert has 2 responsibilities on this play. The first is to win the puck battle. The second is to make sure that even if he loses it, the Hawks forward isn't able to get past him on a chip and run. With Eberle heading back, the Hawks now have just a single forward higher than the Oilers forwards. 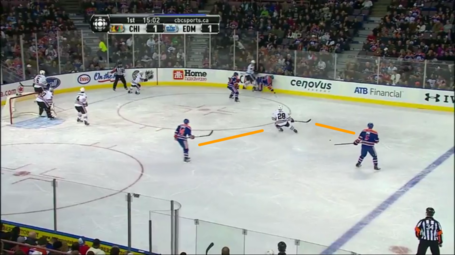 While physical play is very much a part of hockey, it's imperative that you don't chase players around just to make a hit. Pulling yourself out of position and getting a +1 in the hit column while the opposition gets a +1 on the scoreboard has absolutely no value.