The Oilers at the Quarter Pole

Share All sharing options for: The Oilers at the Quarter Pole

So yeah. This year has been a lot more fun, and I am excited that this team is doing well. Still, the team's play at even strength so far this season implies that there's plenty of room for growth.

The first thing I want to look at it is the team's ten-game moving average in Fenwick, Corsi, and Scoring Chances, all at even strength (because it's a ten-game average, the first point is games 1-10, the second games 2-11, and so on): 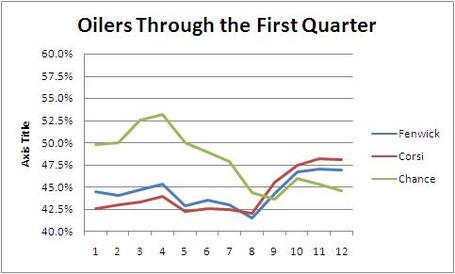 The year started with the Oilers doing well in the Scoring Chance department, but getting pummeled in terms of shot differential. Over time, those measures tend to come together, and that's exactly what we've seen. Of interest to me, the Oilers' Fenwick rate has dropped below their Corsi rate, which suggests that they were either doing a better job of blocking shots earlier in the season, that they were doing a better job of getting their own shots through at the beginning of the season, or that they've been playing teams that are better at blocking shots over the last ten games.

The overall numbers probably look a little bit lower than they would if we just look at scored-tied data since the Oilers have played a lot with the lead, especially at home. That said, it's more than a little bit worrying that the team has yet to have a ten-game stretch where they've taken the majority of the shots. The Oilers are a better team than they were last season, but there's still a long way to go.