Oilers Beat The Best / Worst Team In the West, Down Wild 5-2

Share All sharing options for: Oilers Beat The Best / Worst Team In the West, Down Wild 5-2

The silliness of any "curse" aside, the Minnesota Wild aren't a good hockey team. Though they're on top of the standings, their record is a house of cards.  As Scott noted in the game thread:

When I looked at the possession numbers for the Western Conference 1/4 of the way through the season, things were even worse:

Given that, I'd expect nothing less than a Wild thrashing at the hands of the Oilers, and the Oilers delivered, sort of.  The final score of 5-2 was a welcome relief for Oilers fans and it shouldn't have been that close. 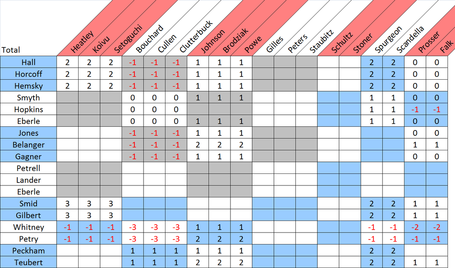 The Oilers first line was on top of their collective game tonight.  Hall - Horcoff - Hemsky combined for 2 goals and 3 assists and 7 shots.  Mike Yeo chose not to hard-match the Koivu line against Horcoff's line, but when they were out there together, the Oilers owned the play.  Their domination was reminiscent of the Penner-Horcoff-Hemsky and more recently Penner-Gagner-Hemsky lines.  If Hemsky can stay healthy, that line is going to create matching issues for every Western Conference team not playing in San Jose, Detroit or Chicago.

Shawn Horcoff has found a one-time half-slapshot that we've not seen for four years.  He crushed one against Nashville for a goal and crushed two more today, but narrowly missed on both.

Even in a 5-2 win, Tom Renney went to the crop early and often. Ryan Whitney's first game back from injury meant...more playing time for Tom Gilbert.  Gilbert chalked up more than 24 minutes yet again and Ladislav Smid was right behind him with 22:29.  Riding his top pair allowed him to manage minutes for his returning star and his bottom pairing:  Whitney totaled 16:22, Jeff Petry 16:56, Theo Peckham 18:33 and Colten Teubert 14:44  Gilbert and Smid responded the responsibility, as they always seem to this season.  They were both on the ice for 4 goals for and while Smid was on for the Wild's first goal, Gilbert was on the bench for both Wild goals against.  Smid was on the ice for a yeoman's 5:06 while short-handed, nearly two minutes more than any other Oiler.

Sam Gagner's game is slowly but surely coming back to him.  He was once again quick on his skates and battled hard throughout.  His Smyth-like mucking in front of the net allowed Ryan Nugent-Hopkins to poke the second goal in as Gagner occupied three Wild defenders and goaltender Josh Harding.  Gagner picked up his fourth assist and had 4 shots to go with it.  His even strength game is being throttled a bit by Eric Belanger's current struggles so Renney might be able to set him loose by giving him a partner like Paajarvi.

Theo Peckham is officially Dr. Jekyll and Mr. Hyde.  Dr. Jekyll is safe, cautious and heady.  He makes the simple play with the puck and pushes the defensive play to the outside.  He doesn't look for the big hit and doesn't run around.  Mr. Hyde is the headhunter.  He tries for big hits at both bluelines and is prone to terrible pinches.  He gives puck carriers time and space and funnels them right into trouble.  Against the Wild tonight, it was Dr. Jekyll on the bottom line.

The NHL.  This isn't an unofficial Canadian holiday, so why on earth are the Oilers and Canadiens, two of the strongest television markets in the league, playing afternoon games when their fans can't watch?  This isn't bad so much as it is just plain stupid.  This should have been an American afternoon with Tampa - Florida and Buffalo - Columbus replacing the Edmonton and Montreal matineés.  It's a small decision, but it's another stupid business decision for a league that kills itself via paper cuts.

Edmonton fans on Twitter and various commenting sites were exposed today.  When other players, say Steve Ott or Alex Burrows, do the things Hordichuk did tonight, look for conflicts and duck or turtle, Oilers' fans go nuts and talk about how awful that kind of play is, how unsportsmanlike that is, how it doesn't follow the code.  However, when Hordichuk did it tonight, all of a sudden it's "gamesmanship" and "tough, veteran play".  Can't have it both ways, ladies and gents.  Remember this the next time Chris Neil comes to town.

Has anyone else noticed that Kevin Quinn's silly "..and the TOP LINE is out on the ice now..." has disappeared since the break up of The Chosen Line?

The Oilers looked like a CHL team in the faceoff circle today. As a team, they went 15-52 in the faceoff circle, "led" by Anton Lander's 0-7, Sam Gagner's 0-5 and Hopkins' 1-8.  A better team, any other Western team, is going to punish the Oilers when their bottom three guys got 1-20 on the dot.  The numbers might be even worse except that Hall and Smyth combined to go 3-4.  12-48 from the centremen is atrocious.

The officiating was a beyond the pale today.  Not only did they miss an obvious high stick on the puck by Devin Setoguchi which led to the Wild's first goal, but they allowed Brad Staubitz and Darcy Hordichuk to play whatever non-hockey game it is that those two play when everyone else is skating.