Though it was against the Nashville Predators that Jordan Eberle had his best day (by the traditional stats) as a professional, the best sequence he's been able to pull off in his young career came in a losing effort against the Dallas Stars.  It was everything that makes Eberle well, Eberle.  While Ryan Nugent-Hopkins is the cerebral, prescient one and Taylor Hall, the Kingston Cannonball, is the volatile and tempestuous one, Jordan Eberle is all of those other things.  He's sneaky, slick and smart and he put all of his best on display against the Stars.

Down 2-0 in the second period, the Stars clear it into the Edmonton zone.  Theo Peckham, as is his custom, panic-clears the puck off of the near side, strong-side glass and out to a waiting Ryan Smyth in the neutral zone.  Note Jordan Eberle's positioning in the still below, he's at centre ice: 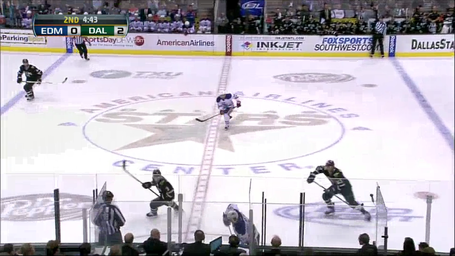 Smyth chips the puck on, past Stephane Robidas and into the Stars zone.  As Robidas turns to chase the puck down, Jordan Eberle closes like a thief in the night: 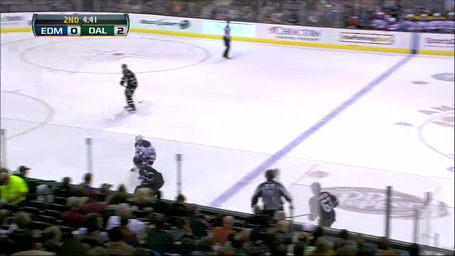 Eberle overtakes Robidas and steals the puck in full stride as he moves deeper into the offensive zone: 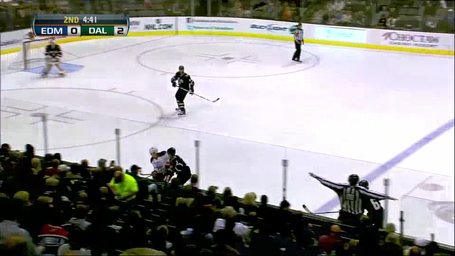 Eberle controls the puck for less than two strides and makes the heads up play to throw the puck to open space to Hopkins.  The pass, a backhand saucer to space for an oncoming teammate, is the definition of slick. 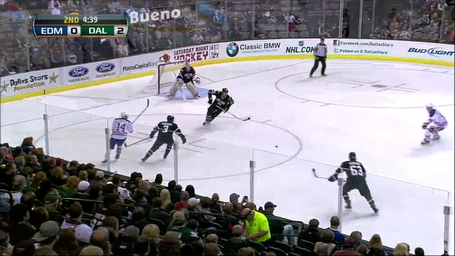 Hopkins makes an outstanding play to gain possession of a puck thrown too far behind him, or rather, too far behind him given his inordinate rate of speed and attempts to throw the puck on net.  Eberle doesn't watch the play over his shoulder, rather, he heads straight to the slot, either for a rebound or a screen, the smart play, the ideal play in this case.  Because of his heads-up play, Eberle and the man chasing him, Robidas, become a primary screen on goaltender Kari Lehtonen: 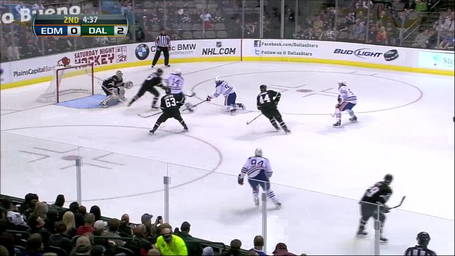 Hopkins buries the puck as Eberle skates on by and celebrates. 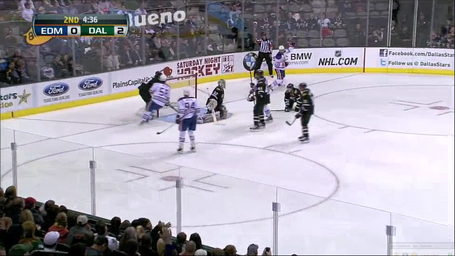