How Does the Top Six Compare?

Share All sharing options for: How Does the Top Six Compare?

In last night's 6-2 win, the Oilers got points from a lot of familiar faces. Ryan Smyth and Ryan Nugent-Hopkins both had two assists, which brought both players past a point per game pace while Jordan Eberle scored twice and added an assist to bring him up to a point per game as well. True, there are many notables still looking for their first goal of the season - Sam Gagner, Magnus Paajarvi, and Eric Belanger jump to mind - but the top six forwards are scoring at a pace that this city hasn't seen in a long time. So how are they doing in comparison to the top forwards on other teams? I'll take a look after the jump.

In order to keep things simple, I defined each team's top six forwards as the six forwards with the most points per game with a minimum of ten games played. That won't be perfect, obviously, but it should do a pretty good job of capturing how much offense teams are getting from their top players. In the following chart, I've presented each team's average top six player as expressed in points per game: 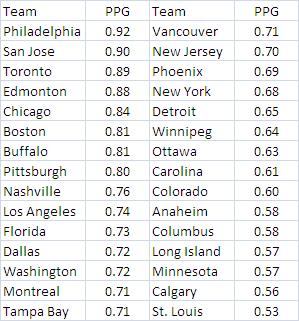 As the season progresses, this range will probably narrow since several of the top teams are getting contributions that far surpass what should be considered reasonable. And while that includes the Oilers (represented by Ryan-Nugent-Hopkins, Ryan Smyth, Jordan Eberle, Taylor Hall, Ales Hemsky, and Shawn Horcoff), it's still exciting to see the team near the top of the chart. The most expensive thing to acquire on the open market is offense, so it's very exciting to see three of this team's youngest players leading the charge. Not every draft pick works out as well as you'd hope, but so far this season, the Oilers have several important ones that are looking mighty fine.