Looking Up and Looking Down in OKC

Share All sharing options for: Looking Up and Looking Down in OKC

The Oklahoma City Barons are off to a roaring start this season. The club is in second place in their Conference with a 12-5-1 record, and have accumulated a +15 goal differential, which is good enough for top spot in the entire league. And yet, the team isn't without its problems. When I checked in on the Barons in October, their biggest problem was at the gate where it looked like they were in for a long season. Now, it looks like the biggest problem is probably on the ice. After the jump, I'll take a look at some encouraging signs at the gate attendance, and a couple of warning signs about their play on the ice.

I'll start with the encouraging bit, which is how well the Barons have done at the gate after a rough opening few games. After a couple of very poor showings, I thought that it was likely that the Barons had shed a significant number of season ticket holders. That may still be true, but it sure hasn't been evident in their more recent home dates. Here's the three-game rolling average for attendance in both this season and last season: 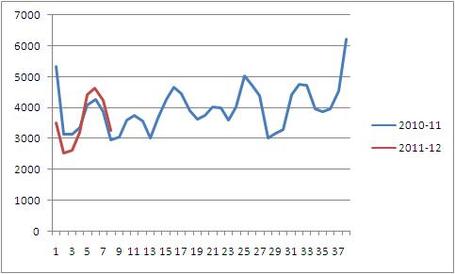 I had expected the Barons to be consistently worse than last year after that troubling start, but that's not what we've seen. In fact, their game on Friday, November 11th set a new record for attendance (excluding season openers and season finales) with 6,282 people in attendance. I don't know the exact reason for the improvement in attendance, but my earlier alarmism must be a major factor.

Will attendance stay up? I don't know, but if it's dependent on the team winning, I doubt it. The Barons defense has been decimated by injuries up in Edmonton. With Johan Motin leaving for Sweden, the only defender left with an NHL contract is Taylor Chorney, and a couple of the players at the end of the roster are playing at the AHL level for the first time. But even if we look back, things aren't as rosy as they seem.

The Barons have averaged 25.9 shots per game and 30.7 shots against per game, for a shot differential of -4.8 per game. At the NHL level, we know that means that the team is likely going to be pretty terrible over the long run. What's sustaining them so far? As you might expect, it's extremely strong percentages. As a team, the Barons have a shooting percentage of 12.0% and a save percentage of 92.4%. Both numbers are well above average and give the Barons a ridiculous PDO of 104.4. Going by the numbers, it seems to me that this is a team poised for a big fall.