Corey Potter Is Out. What Does He Mean To The Oilers?

Share All sharing options for: Corey Potter Is Out. What Does He Mean To The Oilers?

Corey Potter, the biggest story of the first six weeks of the season, is down for four weeks.  Taken by itself, the news is hard to handle.  Potter has been a bright spot on a defense that's been Ladislav Smid - Tom Gilbert and a patchwork quilt.  Taken in concert with Ryan Whitney's continuing injury problems, Andy Sutton's groin issues and the collapse of Theo Peckham's game and the news is devastating.  What does Potter's loss mean to the Oilers and can anyone draw in to adequately replace his minutes?

Potter was Tom Renney's guy.  Signed away from the Rangers organization supposedly as an AHL veteran to stabilize the Barons' blueline, Potter stuck on the NHL roster after Ryan Whitney was lost to yet another injury.  Not only did he manage to hang on to a roster spot, he was quickly elevated to the second pairing and handled the minutes extremely well.  From the defensive deployments article: 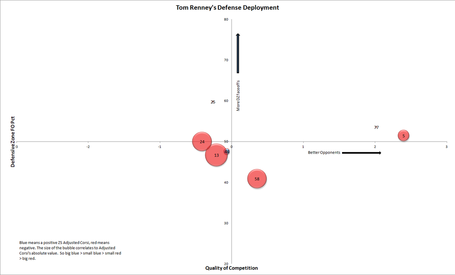 Potter played much easier minutes compared to Gilbert or Smid, but he came out on the positive side of the shots ledger (adjusted for zonestarts), something only Andy Sutton was able to do against even easier competition.

Potter's raw numbers at even strength have been impressive.  His Corsi % with the game tied has been downright dominant at 56%:

Potter is getting the easier minutes, but he's clobbering them.  Cam Barker and Theo Peckham have all played easier minutes and have been flat out destroyed.  When it comes to replacements for Potter's minutes, Petry might be able to step in - he's played more difficult minutes, but the results haven't been good...yet.

Potter has also been a significant factor in the Oilers' power play success thus far.  Tom Renney has employed sort of a reverse umbrella, with Ryan Nugent-Hopkins up front with Taylor Hall and Shawn Horcoff and Jordan Eberle in a roving point spot.  Potter, the only defenseman on the first group, has been tasked with playing the blueline on his own most nights.  His results have been stellar.  In the table below, Potter's power play goals for on per 60 minutes stand far above any other Oilers' defenseman from the last five seasons.

Unless the Oilers can somehow convince Denis Grebeshkov to leave the KHL, they're not going to replace Potter's power play minutes  from this list.

When it comes to true second-pairing defenseman, Tom Renney is left to wait for Ryan Whitney's return from a knee injury and hope that the Oilers can hang on while icing a second pair of Theo Peckham and Jeff Petry.  It doesn't look promising.