Share All sharing options for: Oil Observations From Week 3

The Oilers power play has been a bright spot for this team so far this year. It’s been better not just at generating goals, but generating shots and chances too. A lot of the success has to do with the fact that the primary option for the PP is not just the big booming point shot.

The Oilers improved ability to support the puck has allowed the Oilers to do a better job at keeping the puck in the offensive end, as well as help break down the box and create better opportunities.

The kid unit has been the one that’s done the most damage on the PP so far and it’s because of their ability to move and control the puck. When that unit is going, they are very dangerous. The one issue I’ve seen so far is that this unit needs to set up with certain players in certain spots. Nugent-Hopkins on the RW half wall, Eberle on the point/LW half boards, Potter at the point near the RW and Hall and Horcoff sort of free roaming to different areas as needed. The problem with this requirement is that a smart PK group is going to start picking that up and countering it.

This play here is a won draw by the Oilers. Horcoff wins it to Nugent-Hopkins who is playing the point. Immediately, Hopkins starts trying to make his way over to his spot on the ice and passes the puck to Potter, who then drags the puck to the boards in an attempt to give the puck back to Hopkins on the RW boards. The Oilers turn the puck over because they are trying to do something very specific instead of letting the play flow naturally. 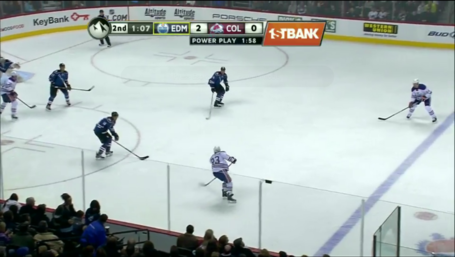 Hopkins looks to Potter and makes the pass across. Right now the Oilers are in good position as they have the puck and there is very little pressure. 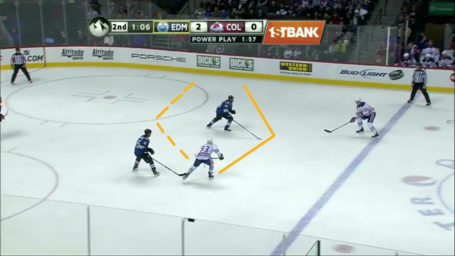 Hopkins begins following the puck to Potter so that he can set up with the puck on the far side half wall. The first mistake on the play is that Hopkins goes high across the zone, allowing the Avalanche PKer covering him to stay high and block the pass off to Eberle who is coming up the wall to the near side point. If he first cuts down towards the zone and then across (following the dash path), that forward has to drop a bit lower and it would leave a huge gap near the close side point area. 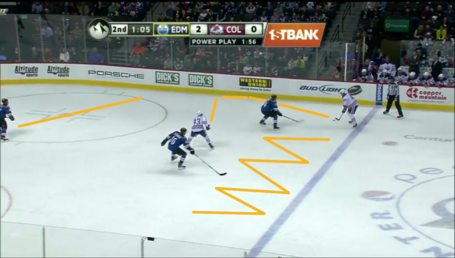 Potter no longer has any real sort of play across the top of the zone and the Avalanche PKer is in his shooting lane. His only option is to chip it into that open area that Hopkins is skating to. The Avalanche defender down in the zone sees this and starts heading there before Potter has even attempted the pass. 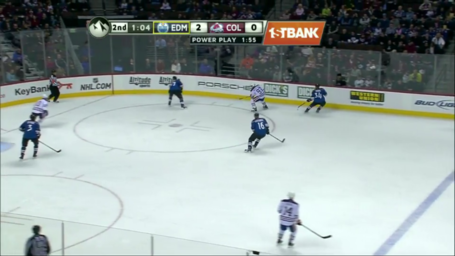 Hopkins can’t quite receive the pass, neither Hall nor Horcoff are available to help and the Avalanche clear the puck.

The play started with full possession and no pressure but the Oilers ran themselves out of options because they tried to set up in a specific formation without giving themselves safety outlets if the play wasn’t there. Hall and Horcoff were both in position for what they were trying to do, but that doesn’t help if you don’t have the puck. If one of them gets to the corner first, there is a chance to make a play.

On this goal, the Oilers still want to get the puck to Hopkins on the RW half boards, but they do it a little bit differently. Before the video, the play starts with a face-off at the RW circle. The Oilers work the puck around and never forcethe puck to Hopkins until they’re set up how they want. Once they get there, the puck goes to Hopkins and then to the middle of the ice for an easy tap in.

It’s clear early on that the Oilers want to run their PP through Hopkins. What they need to do is make sure that it isn’t forced to him in every instance or teams will pick it up and shut it off. We saw what happened when teams picked up on their need to force it to the point.