The Standings After Fifteen

Share All sharing options for: The Standings After Fifteen

Every year there are teams that slump through the first fifteen games of the season and there others that surprise by jumping out to fantastic records. This season, teams like the Stars, Wild, and Oilers are off to very fast starts, while Conference finalists like the Lightning, Bruins, and Canucks have been slow out of the gate. So, as I did last year, I've decided to look at this year's standings after fifteen games and compare them to the historical changes we see from a team's record in the opening fifteen games and their record at the end of the season, which should give fans a reasonable range of expectations for their team based on their record so far.

Looking at every season since the lockout, which coincides with the introduction of the shoot-out, gives us 180 completed seasons. Many of those seasons saw big swings, but the data does provide some good guidelines for managing expectations and letting fans know whether they should be cheering for wins or losses (sorry, Columbus fans):

I've highlighted all of last year's teams that managed to create a new upper or lower boundary, which was just three teams. One of those teams was the Buffalo Sabres who became the first team since the lockout to earn twelve points or less in the first fifteen games of the season and still make the playoffs. Other than that team, it's been mostly a group of sad-sacks with no shot (as you can see by that 74-point average), but I commend them on providing hope for the hopeless. From 13-18, we've got the mushy middle where the team might either be very good or very bad, though I should note that no team that has finished dead last earned more than fifteen points in the first fifteen games. From 19-21 we see teams that are consistently in the mix for the playoffs, but there are several who end up missing out, like last year's Blues. But with 22 or more points, the team is a near-lock to make the playoffs, and in fact, so far not one of them has missed.

So what do this year's standings look like? First up, here's the Eastern Conference: 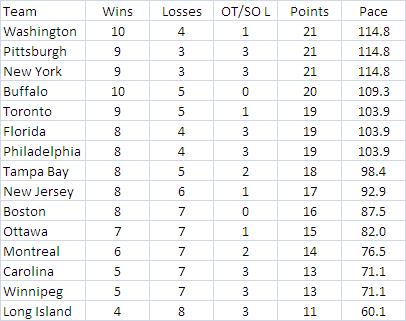 Only the Islanders are on the wrong side of the magic bubble, and no one in the Eastern Conference made it to twenty-two points this season, so there's a whole lot going on in the middle. Still, for teams like the Panthers and Maple Leafs, the promise of just being in the hunt for the playoffs must be exciting.

Next up is the Western Conference: 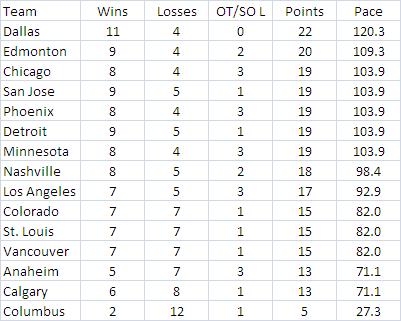 Columbus is done, but that's no surprise. They actually have the worst record after fifteen games of any team since the lockout, and at this point are a big favorite to finish in last place. At the other end of the table we've got the Dallas Stars, who really aren't a very good team, but have jumped out to a terrific lead in the standings. It will be interesting to see if they can hold on and make the playoffs, or if they become the first team to amass a big lead early and give it all back.

Finally, the Oilers. The Oilers managed twenty points in their first fifteen games, which means that they'd set a new low by a significant margin if they finish with less than 85. And if the Oilers finish with at least 85 points, that means playing meaningful games after Christmas for the first time in a long time. Should be - dare I say it - fun!