The Edmonton Oilers have had a surprisingly competitive start to the 2011-12 season. Some of that success has come because of improvements at the team level, most notably on the penalty kill, but no one (save perhaps Tom Renney) has had a bigger hand in the early-season success than Nikolai Khabibulin. The Oilers' last game against Chicago was easily his worst of the season, but even with that game in the books, Khabibulin is among the league leaders in save percentage (.945) one fifth of the way through the NHL schedule, and I don't think anyone saw it coming. Of course, Khabibulin's performance would be surprisingly good no matter what his track record, but it's even more surprising in his case because of his injury history, age, and the horrendous performance he delivered a year ago. So is this unique? After the jump, I'll look for goaltenders who've had a similar resurgence at an advanced age.

The first thing to do was think of some criteria, and so I began looking for goaltenders who were at least thirty years old, faced over 1,000 shots, and posted a save percentage of .895 or worse in a single regular season going back no further than 1994-95. Of course, for a resurgence to occur the goalie needs to be able to find a job in the following season. In the chart below, I've included every goalie who was able to see at least 200 shots against: 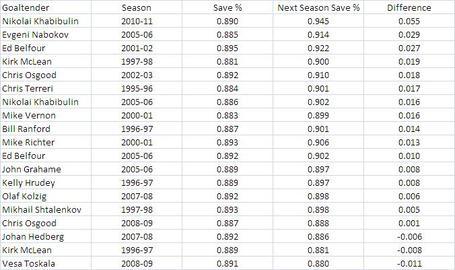 It's interesting to me that there are four different goalies who make the list twice: Nikolai Khabibulin, Kirk McLean, Chris Osgood, and Ed Belfour, all goalies with some measure of playoff pedigree. In fact, in 13 of the 19 examples, the goaltender in question had already been the starting goaltender for a team that made it to the Stanley Cup Finals before his poor season. This leads me to think that the men who hadn't - Evgeni Nabokov, Chris Terreri, John Grahame, Mikhail Shtalenkov, Johan Hedberg, and Vesa Toskala - were particularly fortunate to stay in the NHL.

Even more interesting to me is just how similar Nikolai Khabibulin looks to Ed Belfour. Both players won Stanley Cups during their prime. Both players had one terrible season followed by a modest bounce-back, and if Khabibulin holds it together, both will have one terrible season followed by an astonishing bounce-back. Ed Belfour was not a favorite of mine growing up. He didn't do the Oilers any favors when he was with the Blackhawks, and God knows things didn't get any better when he joined the Stars; his induction to the Hall of Fame doesn't bring back a flood of fond memories. But maybe - just maybe - I can see Ed Belfour's name in the news for the next couple of weeks and find in him a sliver of hope that Nikolai Khabibulin's resurgence is real.