One of the big stories so far this year has been the Oilers ability to block a lot of shots. As a group the Oilers are 6th in the NHL with 269 shot blocks (15.82 per game). Leading the charge has been Ladislav Smid who has 56 blocked shots in just 17 games (3.29 per game).

I think it is just assumed that shot blocks are a good thing, but that isn't always the case. There's an inherent danger when you start focusing on a shot block at the expense of your other defensive zone responsibilities. You can end up cheating into the shooting lane and away from your passing lane, you can leave a man unmarked around the net, etc.

The Oilers are spending over $4.5 million on their goaltending this season. These two highly paid players are wearing literally tens of thousands of dollars of the best protective goaltending equipment money can buy. The players in front of these guys have to understand that not every shot needs to be blocked and that they need to let the goaltenders to their job so they can properly do their own.

Generally speaking, a shot block should occur because your proper positioning takes you into the shooting lane and instead of moving (or flamingo-ing) out of the way you block the shot. The Oilers problem of late seems to be that instead of proper positioning, they are floating into the shooting lanes and playing the shot block when they should be worried about the other areas around the net

The following are from the game against Boston and illustrate how playing the shot block instead of your man can end up in the back of your net.

A bad turnover in the Oilers end causes a bit of a scramble. Gilbert over plays the shot and the pass goes right into the prime scoring area and a bad bounce ends up in the back of the Oilers net. 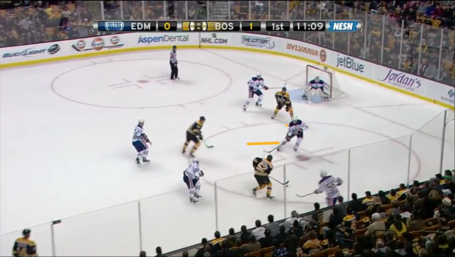 Gilbert gets caught a bit in no man’s land because of the turnover, but there’s a simple adjustment he can make. He wants to get into a position where the puck carrier has to stay outside the face off dots and where he can get in the passing lane. This isn’t really a good shooting spot, especially when you consider that it’s Zach Hamill and not Stamkos or Ovechkin (even in the latter 2 cases I'd bet on my goalie on a straight on shot from that angle). 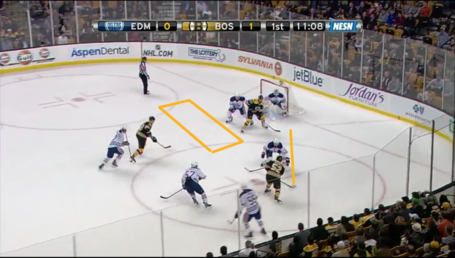 Gilbert comes over and covers the shooting lane but leaves a big gap in the middle of the zone. This is a shot Dubnyk will stop virtually every single time and there’s no need to play in the shooting lane on this play.

Ladislav Smid attempts to block a Joe Corvo wrist shot from the point, and in doing so, leaves Brad Marchand untouched in front of the net for a relatively easy deflection for an NHL calibre player. 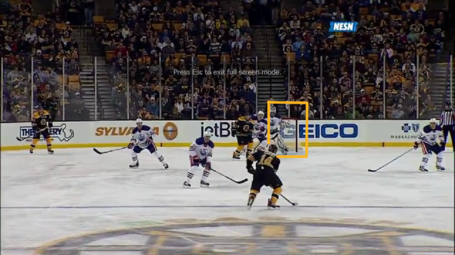 Smid has Marchand boxed out and all he wants to do is keep him out of the area that’s highlighted. If he can do that, Dubnyk has an easy view of a wrist shot from the point. At the very least he wants to tie up Marchand to prevent a deflection and any possible rebound opportunities. 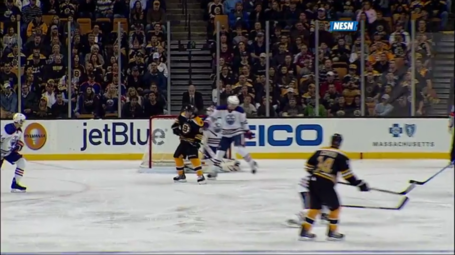 As the shot comes in, Smid completely abandons Marchand and tries to step into the shot block. Marchand casually reaches forward and tips the puck past Dubnyk. The Oilers give up a goal on a shot that really had no chance to go in the net.

Shot blocking is a useful skill, but sometimes players put too much emphasis on doing that as opposed to playing proper positional hockey. A shot block should occur because of proper positioning, not despite it.