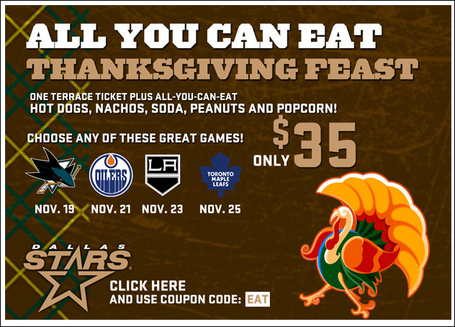 If you're a long-suffering Edmonton Oilers fan living in Dallas or Oklahoma, or you're an Alberta resident looking for an excuse to go somewhere warm for a long weekend, the Dallas Stars are giving you the opportunity to catch the first-place Oilers in Dallas later this month for only $35. $35 gets you one terrace seat to the November 21st game against the Oilers, plus all you can eat arena food. The $35 price alone might seem insane to fans in Edmonton, but throw in all you can eat hot dogs, nachos, soda, peanuts and popcorn and Ryan Batty weeps with jealousy. The same deal is open to Leafs fans on November 25th and at least one SB Nation writer likes the idea:

Even though the Stars are in first place, the Cowboys are stumbling along at .500, and the Mavericks are on strike, the Stars have slipped to last in home attendance thus far this season with a miserable 10,001 fans per game filtering through the turnstiles at American Airlines Arena. Creative marketing is a must right now and will be as long as the Stars' ownership situation remains unsettled.