In theory, the NHL entry draft is a very monotonous process. Every year the same 30 teams march to the podium and call out a name and lay claim to a player. Sometimes its the first time we hear about the said prospect, especially in the Oilers' case. No it's true, shining examples are Kristians Pelss and Frans Touhimaa. And sometimes its the only time we hear about a said prospect, as in Atte Engren (who? Trust me I really don't have a clue). However every year people are obsessed with the draft. Why? Maybe it is because of the mystery the draft  brings each year.  Trades and picks, empire makers and flops, all wrapped up in 18-year-old kids.  Or maybe it because of the promise a lottery pick holds, especially for sad Oilers' fans like me.  Or maybe it's just the next big thing after the Stanley Cup and zealous hockey fans need hockey. Whatever the reason maybe, fans spend countless hours reading, researching, watching the draft prospects; forming opinions, biases and favorites. And it is my pleasure, no my obsession, to help the cause!

I have included most of the top draft prospects from the CHL.This list looks short, but it towers above the first list of the 2010-11 season. So take heart, I will include more players as the season goes along and as they rise above their peers. I have not done any color coding as the list is fairly small, but I've indicated the year the said player was drafted or is eligible for draft. Lets look at the list after the jump. 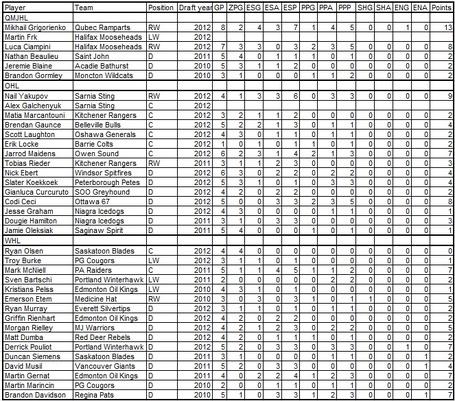