Before looking at the results, I should note that empty-netters aren't included. If you win 3-1 but got the third goal on an empty-netter, I didn't consider that win a "Clear Victory". If you win 4-1 but got two empty-netters, still doesn't count. With that little caveat in mind, here are the standings for the Western Conference: 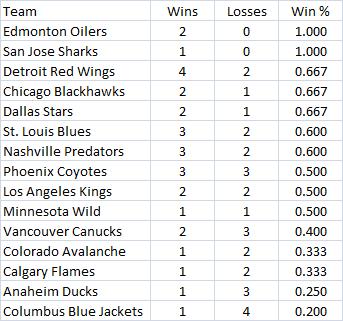 In case you were wondering why I'm talking about this so early, you can look at the team at the very top of the standings. Yeah, baby! Anyroad, not too much different here from the actual standings, although the Avalanche have won by one a bunch, and there's no team really separating itself from the pack.

Which brings us to the Eastern Conference: 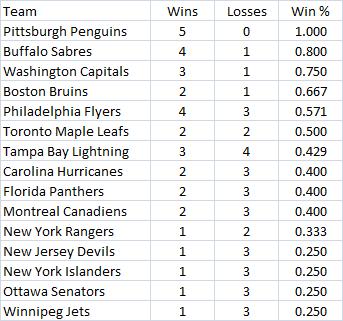 Again, not too different from the regular standings, but the Penguins look absolutely fantastic (despite last night's one-goal loss to the Leafs). The Bruins, on the other hand, have been losing a lot of close games to start the year. I heard someone on the radio talking about them being a team that's finding a way to lose, and while I haven't seen them at all this season, that "playing okay but stuff's going wrong" assessment jives pretty well with these numbers.

Finally, let's take a look at how each division has done so far. I did this last year too, but found that the results were getting swamped by games where the winner and loser were both from the same division. For that reason, I decided not to include any divisional games in the results this season:

I was actually expecting a bigger gap at this early stage with at least one division getting off to a very fast or very slow start, but at least for now, things are still quite clumped together. The funny thing is, I wouldn't be surprised to see those winning percentages looking pretty similar at the end of the season.

If at any point in the season, you want to check out where your team stands relative to the rest of the league, you can find the Clear Victory Standings, which are updated each morning, on the right-hand sidebar.