My colleague Bruce McCurdy got it right when he said, "Put those skates under a 6'3, 200 pound frame and you have an imposing prospect. For Magnus Pääjärvi, the sky is the limit."  A number of writers have looked at Paajarvi's improvement in 2011, including Ryan Batty, who wrote, "Another positive out of Paajarvi's season was that his production didn't fall off late in the season. Having played 50 and 49 games in his previous two season with Timra IK it wouldn't have been a big surprise if the longer NHL season wore Paajarvi down. But even though he was playing more games than he ever had before and injuries had increased his icetime, Paajarvi's play didn't drop off at all. In fact in terms of scoring chances, Paajarvi played his best hockey at the very end of the season. Yet another very encouraging sign for the future of the Oilers."

And though Paajarvi's debut season wasn't as flashy as Jordan Eberle's or as enthralling as Taylor Hall's, Paajarvi's numbers do show some promise: "Paajarvi didn't put up as much offense as Kopitar and Sundin, but surprisingly, for me at least, he's kept pace with the Sedins."

But the offensive improvement wasn't a fluke, carried by dependence on linemates or an unsustainable shooting percentage.

As Ryan pointed out, Paajarvi's first 20 games were very rough in all areas.  But a closer look at how Paajarvi finished the season is encouraging.  In the table below I've broken out Paajarvi's shot rates through his first 40 games and his final 40.

The difference is significant.  His responsibilities and playing time increased after Dustin Penner was traded and Taylor Hall was injured, but he did not shrink in the face of tougher competition.  The improvement is even more obvious when viewed as a rolling average.  Below is a chart detailing Paajarvi's 10-game rolling shots on goal per game average.  The second segment of the above table starts in the midpoint of the chart, just prior to the jump to over 2.5 shots per game.  *Click to enlarge 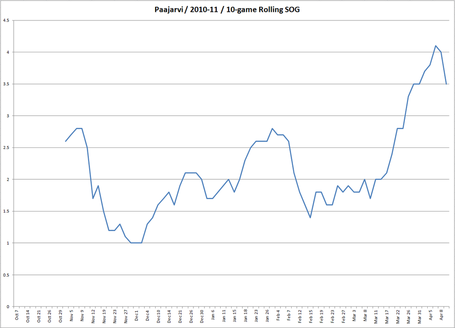 The Matterhorn-like slope on the right side of the graph occurs after March 3rd, when Hall suffered his ankle injury.  Those 17 games were the true driver of his offensive numbers.   I've broken out those final 17 games and created three segments to Paajarvi's rookie season:

Assuming a 9% shooting percentage, Paajarvi's goals per game projected over a full season begin at 14 in his first segment, move to 15 in the second segment and jump all the way to 25 in the third segment.  He can generate the shots, now it's just a matter of giving him the icetime.