Thank goodness for power plays.  The Capitals outshot the Oilers 27-12 at even strength and attempted 33 more shots compared to the Oilers 11.  The Caps attempted 60 shots at even strength and the Oilers attempted only 23.  But the Caps couldn't stay out of the penalty box.  The refs called a very tight game at Rexall place resulting in  8 power plays for the Oilers in the first two periods and just one for the Caps.  The Oilers were able to cash in twice with a man advantage and hung on throughout a third period in which they were outshot 19-6.

The first period started off with a familiar theme - Theo Peckham taking bad penalties, Andy Sutton getting caught out of position and a young line caught running around in their own end as Karl Alzner scored from the point to put the Capitals up 1-0.  But the Oilers, with the help of three power plays after the Alzner goal, were able to gain some control of the game.  Taylor Hall scored on a feed from Jordan Eberle that caused me to giggle out loud because it was so good, and the Caps were so helpless to stop it that it was funny.  The Oilers nearly scored again minutes later as Sam Gagner thought he knocked a loose puck in and started a premature celebration.  The period ended 1-1 and I commented, "The Oilers are pretty lucky to get out of that period with a tie. They were getting their butts kicked at evens."  There was more to come.

The second saw more head-hunting by Sutton, more stupid plays by Peckham, more even strength domination by Washington, and five more power plays for the Oilers.  They scored on the second power play as Jordan Eberle wristed home a Corey Potter rebound, and it was a terrible rebound by Tomas Vokoun, to take the lead at 2-1.  From that point through the end of the game, except for Edmonton power plays, the game was owned by the Caps.

Washington came out on an absolute tear in the third period.  The guys behind Russian Machine Never Breaks tweeted that they'd never seen the Caps so hungry for a goal as they simply dominated possession.  It was 19-6 Caps by the shots, but the Caps attempted 16 more and the Oilers attempted just 4 more.  Of the 18 total faceoffs in the third period, 11 of them were in Edmonton's end.  The Oilers staved off the attack thanks to Nikolai Khabibulin.  He kicked pucks out like a demon.  He was fast and spry.  He looked big in the net and looked young on the move.  He didn't try to play the puck and he was able to control his rebounds.  The Caps are a good team, a great team even.  They should have won this game.  In short, Khabibulin was amazing. 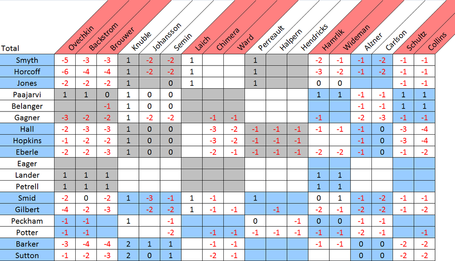 I'm not sure who the man wearing #35 is.  He's playing at a level he's not been able to attain in the last five years.  It's early, the season is long, regression is imminent, and he's injury-prone, but his play has been spectacular.  Six goals against in six games.  All we can do is look on in awe and hope he can steal a few more games on the upcoming road trip.

Tom Renney's strategies were outstanding.  Yes, he would've lost without Nikolai Khabibuin's ridiculousness, but he's outmanned by a large degree right now and he's doing what he can to put his team in the best position to win.

Ladislav Smid may have played his best game as an Oiler tonight.  He and Tom Gilbert were assigned the difficult task of defending the Backstrom line.  Smid played 12.7 minutes at even strength -- 8.1 against Backstrom's line.  Though Tom Gilbert drew Ovechkin's side, Smid was excellent in a support role and against Ovechkin when needed.  The Capitals' broadcast team raved about his 4 blocked shots, but it was his puck movement that left an impression tonight.  He moved the puck when he had the opportunity.  The hesitation and hitches normally so prevalent in his game weren't there.  He was stuck in his own end a couple of times and did throw an elbow to the head of Marcus Johansson, but overall he was stellar.  He's a different defender when paired with Tom Gilbert.

Sam Gagner must be feeling better.  He had a number of sequences that ended with him banging around in front of the net and as I noted in the game thread, he played one shift in contact with an opponent the entire time except on his shot attempt.  If he's able to add that type of game to his heady, play-making style, the points will start to pile up.

Ryan Nugent-Hopkins went 1-5 in the faceoff circle tonight, bringing his season total to 21-74, or 28.4%.  Renney is stuck with a line he can't put out in his own end, can't put out against the toughs and is trying his best to avoid even strength faceoffs with them.  Through 9 games, Nopkins has been on the ice for 71 faceoffs, compared to Hall's 133 in his first 9 games as a rookie.  Of note: Taylor Hall took two faceoffs tonight with Hopkins on the ice.  Starting Hopkins on the wing in the circle isn't a bad thing.

The Oilers need someone else who can move the puck besides Tom Gilbert and Corey Potter.  Get well soon Ryan Whitney or get here soon, Jeff Petry.

Andy Sutton took a terrible penalty with 1:06 to go, hitting Matt Hendricks with an obvious shot to the head, a terribly dangerous and dirty play.  He then proceeded to chew on the ref's ear about the call as if he had any case at all.  Sutton consistently took himself out of the play to make hits tonight and it cost the Oilers.  Sutton and Barker were lost in their own end consistently even though they only played 2 minutes against Ovechkin's line.  Bad penalties, running around, pinned down, easier minutes -- it was an awful night for Sutton.

Theo Peckham took a stupid and unnecessary cross-checking penalty 2:52 into the game.  He also threw a terrible backhand pass to the middle of the rink on a breakout with 3:42 to go in the third.  The pass was stolen by Alex Ovechkin and the play ended with an excellent scoring chance for the Caps.  Peckham played exactly 1 minute at even strength against the Ovechkin line and 3 against the Semin line.  His other six minutes were against the Caps bottom two lines.  He got as much protection as Tom Renney could've given him on the night and he's still playing like he's a rookie.  There's no way Renney can make it easier on him to let him find his game - this is it.  Peckham needs to find his game or make way for Jeff Petry.

Ben Eager's Corsi/60 against the Caps was -112.75.  He was benched with 10 minutes to go in favor of Eric Belanger and Shawn Horcoff double-shifting with Eager's linemates.